Gardner Intelligence found a distinct relationship between profits and order lead time in the thousands of data points it reviewed.
#topshops #marketing #plating

What a difference a day makes. If you are in the finishing industry, that difference can be about a 4 or 5 percent improvement in profitability related to order lead times
and training.

That’s one of the findings from the 2018 Products Finishing Top Shops Benchmarking Survey for the electroplating industry, which generated plenty of data designed to assist
shop owners and managers in increasing productivity and improving efficiencies. 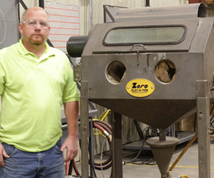 This year, we asked our partners at Gardner Intelligence, which runs and scores the survey, to look for correlations in the statistical data they culled from the several hundred shops
that took part in the extensive survey.

Brian Palmer, the director of data science for Gardner Intelligence—which is owned by the parent company of Products Finishing—found a distinct correlation between profits and order lead time in the thousands of data points he reviewed.

“There is a 4 percent increase in profit margin per each day of decrease in order
lead time,” Palmer says.

“The statistics showed a 5.8 percent increase in profit margin for each increase of approximately two days training,” Schafer says.

How do you become a Top Shop? Prepare months in advance of the survey.

The annual Products Finishing Top Shops Benchmarking Survey attempts to determine what differentiates the best finishing practices that shops should emulate to be profitable and competitive. The goal is to hone in on the best finishing practices, the most efficient procedures and the most sophisticated business operations, and determine what benchmarks a shop needs to do to be considered one of the best in the business.

There are many benefits of the Products Finishing Top Shops Benchmarking  Survey. Your shop can:

Visit short.pfonline.com/top-shops to get more information about how to prepare to take the survey. Also join the National Association for Surface Finishing (NASF) and the Aluminum Anodizers Council (AAC) for assistance and training. The NASF and the AAC can help captive and job shops that want to increase efficiency, improve their bottom line and work their way toward becoming a Top Shop.