Great Lakes Metal Finishing was recognized in the Finishing Practices category for its outstanding scores in several areas of the survey.
#marketing #topshops #plating 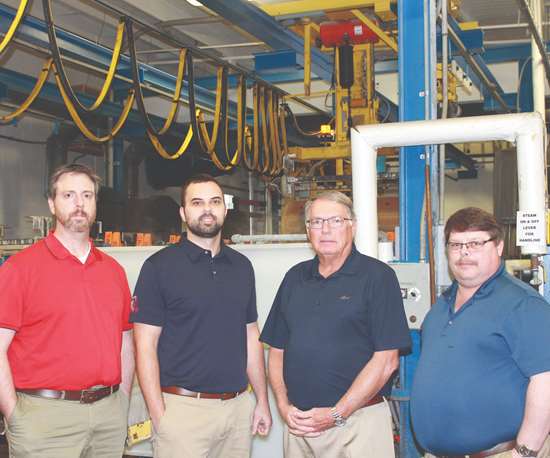 When Great Lakes Metal Finishing opened its doors in 1994, one of its first customers ran its inventory under a just-in-time system, which was a little perplexing to the newly opened
shop. It forced founder and President Dennis Hartwig and his team to get serious in a hurry about managing turnarounds and delivery schedules, and it’s a skill the company has improved on continually over its two decades in operation.

“In order to meet that customer’s needs—sometimes with a day or same-day turnarounds—we developed our operational and quality programs around this philosophy,” says General Manager David Wachter. “It requires a hands-on approach from all associates, from shipping and receiving, quality, production, maintenance, and management. This philosophy has helped us remain competitive when bidding on jobs outside of our region, where it may take a few days for the parts to get here and back.”

That philosophy also has helped Great Lakes earn special recognition in the Products Finishing Top Shops Benchmarking Survey in the Finishing Practices category for its outstanding scores in several areas.

With an on-time delivery rate of 99 percent and a first-pass-quality yield of 98 percent, the shop finished about 38 million parts in 2017, which includes about 1,200 different types of parts. Great Lakes says it accomplished this by adhering to strict quality standards for its 30 employees, as well as continually looking for improvements in equipment and operations.

“As in any business, in order to stay competitive, you need to ensure that you have not only the best equipment, but that you have a quality maintenance staff to maintain and improve
it,” Wachter says. He gives much of the credit for his shop’s success to Dave Kelly, who has been a key part of Great Lakes for many years.

Great Lakes believes that consistent quality and customer service are the two main areas that separate the shop from others in the finishing industry.

“The vast majority of our work is spec, and whatever is required by the plating spec is exactly what you are going to get at Great Lakes,” Wachter says. “Being able to give the customer exactly what they need week in and week out has helped us build many long-term relationships.”

Several years ago, the company started to implement business plans covering one, three, five and 10 years, and as a result of that process has rebuilt three production lines, installed two new production lines and installed a new waste-treatment system. One of the new lines is a high-zinc-nickel barrel operation that was added to meet the increase in demand from customers.