Pilkington Metal Finishing spent about 12 percent of its gross profits on capital expenditures in 2017, which is one reason the shop was selected for recognition in the Finishing Technologies category.
#topshops #plating #marketing 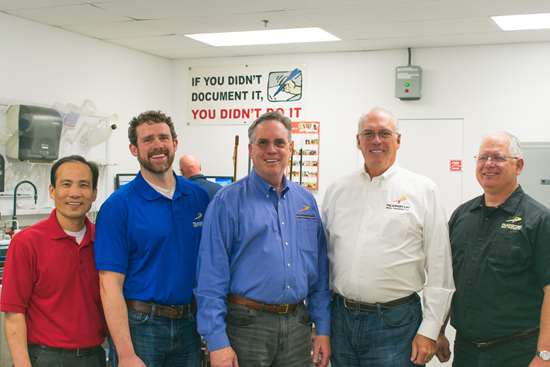 Van Pilkington puts his shop’s money where his mouth is: He spends well above the industry average on capital equipment each year to make Pilkington Metal Finishing in Salt
Lake City, Utah, one of the most technologically advanced shops in the U.S.

“We make capital improvement budgets, and we spend our budgets,” says Pilkington, who has been the company’s president since the shop opened in 1979. “This is true of building maintenance, as well as with labor and materials. Capital improvements typically pay for themselves in improved quality or lower hassle factor, so they’re a good investment.”

In fact, equipment was what led Pilkington into the finishing business in the first place. In 1981, he and his father began refurbishing medical equipment using a small tank line in a small garage. Pilkington gradually expanded the business into liquid painting and anodizing. Today, the shop offers anodizing, conversion coatings, non-destructive
testing, heat treating, liquid and powder coating, electropolishing, and graphics application.

In 2017, Pilkington Metal Finishing spent about 12 percent of its gross profits on capital expenditures, which is one reason the shop was selected for recognition in the Products Finishing Top Shops Benchmarking Survey in the Finishing Technologies category. Last year, it also registered a 99.5 percent first-quality-pass rate on more than 10 million parts using four finishing lines.

Pilkington gets assistance from his brother, David, who is vice president of operations, and Wayne VanTassell, the shop’s quality director, as well as the 60 employees.

“We have embraced the discipline Nadcap requires,” he says. “We’ve taken that same approach into the non-spec areas of our processing, resulting in improvements.”

For example, Pilkington Metal Finishing has gained better use of its enterprise resource planning software, resulting in improved efficiencies all around the shop.

Being a Products Finishing Top Shop is something the organization shoots for every year.
“We think it motivates us to be better and helps the finishing industry as a whole,” Pilkington says.