Hixson Metal Finishing was named the No.1 shop, based on aggregate scoring of the survey components. Check out all the North American plating shops that made the Products Finishing Top Shops list.
#topshops #plating #marketing 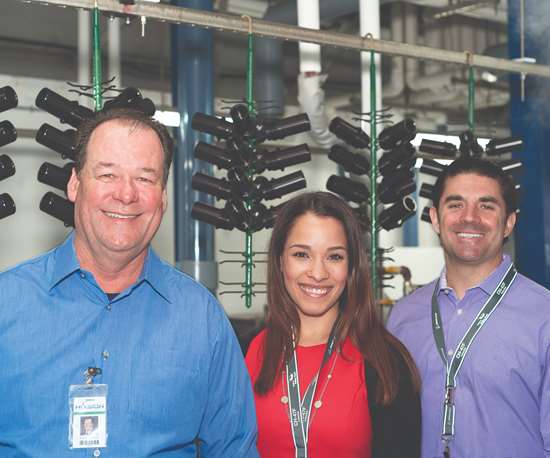 There’s a phrase that Hixson Metal Finishing President Douglas Greene often repeats, acknowledging that his team surely has heard it a million times over the years: “Quality is king, and delivery is queen.”

He says it to anyone and everyone at the Newport Beach, California, company, which finished as the No. 1 shop in the 2018 Products Finishing Top Shops Benchmarking Survey, based on aggregate scoring of the survey components.

Hixson is a full-service provider of more than 80 finishing, testing and inspection processes with numerous qualifications, including Nadcap, FAA and AS9100. The shop’s customers are a who’s who in aerospace and defense, including Boeing, Lockheed Martin, Parker Hannifin and Triumph Group.

“Quality and delivery are mutually married, and you can’t have one without the other,” says Greene, who has been president of the company for 18 years. “When push comes to shove, we always push for quality, even though all of our customers will tell us they want the best quality, but also want a 10-day job done in two days.”

Hixson was founded in 1958 as a niche commercial metal-finishing processor, catering to the decorative chrome plating needs of the boating community in Newport Beach, Greene says. The shop quickly gained a reputation for providing quality plating capable of withstanding the tough and rigorous ocean environment.

When the aerospace industry in Southern California began to grow in the late 1970s, Hixson focused on that growing market opportunity and installed numerous lines and services to attract more customers.

Now with more than 140 employees and about 850 customers, Hixson scored amongst the top in almost all categories related to quality and delivery in this year’s survey, checking in with 99.5 percent rates for both on-time delivery (averaging 5.6 days) and first-quality-pass rate for more than 10 million parts processed in 2017.

Greene says the secret to his company’s success is “team cells” that work together on various customer projects, giving more individualized attention to customers and getting team members on board whenever critical issues arise.

“Using team cells gives that customer the royal treatment,” he says. “We all know we are in a service industry, and that is what we work very hard on for our customers: delivering great service to them.”