40-Under-40 award recipients were chosen by Products Finishing from reader nominations based on leadership and industry involvement.

Products Finishing’s 40 Under 40 award program recognizes young professionals in the finishing industry. The program’s emphasis is on leadership and potential leadership — whether for a current employer or overall involvement in the industry. This year, PF editors combed through a long list of nominees with a wide range of skill sets. The finalists include engineers, chemists, general managers, operations manager and sales professionals, to name a few. Whether focused on the business side or on the shop floor, the common thread between them is that they all are innovators and trailblazers striving to be the next generation of leaders in this industry. 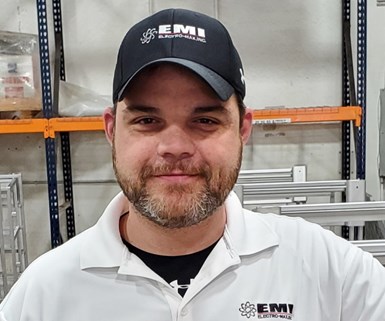 Jeremy Fawbrush joined Electro-Max Inc. (EMI, Hampshire, Ill.) in 2012 as a process engineer. He has served as a lead on several initiatives for the company including rewriting its quality system in order to achieve new accreditations necessary for growth. Fawbrush moved into the role of general manager in late 2018 and brought the company to its highest grossing year in its history the following year. At the age of 38, Fawbrush says he wears many hats.

PF: How did you get you start with Electro-Max?
I started with Electro-Max as a process engineer and waste water treatment operator after graduating from Northern Illinois University with a business degree. I never dreamed I would know so much about stainless steel and metal finishing, but this is where I ended up and I could not be happier.

PF: How would you describe your current role with the company?
After years of hard work and dedication to the company I am now in charge of all aspects of the business from the front office to the back shop. My current role is General Manager or Management Systems Director. Being a smaller company means I get to wear many hats and I love the variety I get to deal with every day. I am in charge of all aspects of the operation including financials, scheduling, quality and employee management. We are a quality-driven shop catering to niche manufacturers. We process [a variety of] parts from surgical devices to missile nose cones and everything in between.

PF: What career milestones helped get you to where you are today?
I have been the lead on many exciting and beneficial projects here at EMI. One of the first projects was to rewrite the quality system to acquire our Nadcap certification for pickling, passivation and electropolishing. This system was written to be completely integrated with our ISO quality systems (9001, 13485 and 14001). This allowed us to change our business model and choose the work we wanted to do. We started getting away from high volume, low margin work and started tailoring to higher profile industries such as medical, aerospace and food. I also spearheaded a water-use reduction plan shortly after the quality system rewrite. To decrease our environmental footprint, we wanted to reduce our water consumption which was right around 14,000 gallons a day. I was able to reduce water usage by 94%. There have been many milestones while here with EMI which have allowed me to continuously grow as a business manager.

PF: What do you think are the most important attributes for being successful in this industry?
I think you always need to be hungry in this industry. The finishing world is a dog-eat-dog world and you just have to have that drive to stay on top of new processes and new materials being used that will require finishing services. Aspiration of making those new findings come to fruition. Developing clear cut goals and having the willpower to achieve them. Of course, we also must remain humble and preserve our integrity. And also resilience, this is extremely important especially in the times we are currently living in.

PF: What are your goals for the future?
My goal is to grow the company into a multi-million-dollar outfit. We are projecting growth over the next 5 years due to the addition of other processes. We are looking to add a Chromate conversion line in-house in the next coming months. We will then start offering dry film lube application. In the next couple years, we are looking to add anodizing to our offerings. Eventually we would like to be a one-stop-shop for all finishing needs by providing not only the main processes but also the ones that support the manufacturing efforts such as penetrant testing, on-site services, media blasting and assembly. Eventually I would like to purchase the company when the boss retires and continue to build upon the foundation we have made over the last 8 years.

Angelo Magrone has been in the metal finishing industry since 2012, having worked for a supplier of equipment (Serfilco), a supplier of chemicals (Asterion LLC) and now for Bales Metal Surface Solutions. He also serves on numerous NASF commitees.

Ben Lawhorn has been in the finishing industry for 12 years at anodizing and precision hard coating facility Global Metal Finishing (formerly East East DyeCom). He started as a sales manager, and now supports most roles in the company.

Christopher Gray founded Alliance Industrial Masking (AIM) in 2008 and was the sole employee for 3 years. In 2011, he was able to expand the business, but remains involved with every aspect of the company.

David is a key leader at Pioneer Metal Finishing, where he was worked since 2007. He has completed Sandler leadership and sales training and participated in the Leadership at Pioneer Program.

Dean Bell has been with his family company, Precision Finishing, since 2013. In his time there, he has learned the business from the ground up to provide customers with solutions.

Dean is one of the youngest members of the executive team at MacDermid Enthone, and has worked with the company since 2005.

Doug started in the industry 12 years ago as a production assistant. He has received Columbia’s STAR employee award and is a member of the internal environmental committee.

Dustin Evans has been in the plating industry since 2012, and he now provides technical expertise for plating lines at Atotech. He is a certified as a TS 16949 Internal Auditor, as well as a Lean Six Sigma Black Belt.

Emerson has been in the industry since 2014, after he graduated with a bachelor’s in engineering from Cornell. He started at AeroDynamics as process engineer in 2018 and quickly moved up to his current role.

Emily has been with MicroCare since 2016, and commonly presents at tradeshows and other finishing events. She published over 15 technical articles in trade journals last year, and she is the VP of membership for the Surface Mount Technology Association.

Eric started in the industry as a forklift driver in 2001 and has worked his way up to his current role. He is a Level 3 NACE-Certified Coating Inspector.

Ivan has been in the industry for 12 years at PPG. His responsibilities have grown to include managing departments, monitoring production and introducing new technologies to Mexico and Central America.

Jason came to Siemens from the environmental field. In his two years in the field, he has passed the CEF exam and the South Carolina Physical Chemical wastewater exams for the "D" and "C" level.

Jeff has been in the finishing industry since 2009, working at a wire electroplating company (Elkem). He is also on the board of the Masters’ Association of Metal Finishers and President of the Wire Association International.

Jim holds a PhD in chemical engineering and has worked at Atotech and startup Modumetal. He has worked at Hohman for one year and has already made an impact.

Jordan has been in the finishing industry for 15 years. He recently completed the AESF Foundation’s Certified Electroplater-Finisher program and the CAF – Airline and Aerospace certification. He is working towards Master Surface Finisher certification.

Josh has been in the finishing industry since 2009, when he started as a line technician at SRG, a coatings manufacturer. Now, he is the plating process manager.

Josh has 10 years of experience in the mass finishing industry with Walther Trowal. His expertise includes process development and improvement, finishing applications for 3-D printed parts and shot blasting.

.Josh has worked at Calvary for his 7 years in the finishing industry, where he started as a lab technician and rose to become lab manager.

Juan has been in the electroplating field for over eight years. He is certified as a Six Sigma Green Belt and was Green Belt of the Year in 2016.

Julie has been with MacDemid Enthone for five years, where she has implemented global software and driven brand awareness, among other accomplishments.

Keith has been at Saporito Finishing for nine years, where he maintains documents to continue meeting NADCAP and ISO 9001:2015 certifications and attending NADCAP conferences.

Kilby Garcia has been in the finishing industry for almost ten years, where he has helped move Five Start Plating from a small anodizing company to a full metal finishing shop.

Matt has been in the finishing industry for seven years with Master Finish. He has obtained a CEF-3 and teaches as an adjunct at Calvin College for Chemical Engineering.

Matt has been in the finishing industry since 2007. At Coventya, he has risen from production technician to material resource planner to his current role.

Michael has spent 11 years at DeFelsko Corporation, a manufacturer of coating thickness gages and inspection instruments. He is an active member of the Society of Protective Coatings (SPC), the International Association of Corrosion Engineers (NACE), the Powder Coating Institute (PCI), American Society for Testing and Materials (ASTM) and International Organization for Standardization (ISO).

Mike has been in the industry since 1999, and he has helped grow Miles Chemical from a small, three-person operation to a finishing supplier with almost 100 employees.

Michael has been in the finishing industry since 2014. He started as an office manager but has transitioned into an operations role for American Metal Coatings.

Mike started out as a chemical sales rep but has been working in the finishing industry for just over a year. He is a member of the Canadian Association for Surface finishing.

Monique has worked at Plateco, a zinc plating company, since the summer following her eighth-grade year. She has been there full-time since 2015 and is an ISO 9001:2015 auditor.

Nate manages implementation of DWOS (Dynamic Work Order System), an application designed specifically for the metal finishing industry.  Nate has been able to use his real-world knowledge of Supply Chain Management and the aerospace industry to improve customer efficiency, optics, and quality management while maintaining existing business processes and workflows.

Owen is the head of the Environmental, Health and Safety committee at Aerodynamics. He is also certified as a Level II Wastewater Operator, Hazardous Waste Coordinator, HAZWOPER and DOT

Ryan has been in the industry for 16 years. He started out as a part-time intern and now works as a full-time formulating chemist.

Scott started in the finishing industry as an intern in 2004 and has worked up to his current role. He is on the board of his local CCAI chapter and he is a member of the Porcelain Enamel Institute.

Shane started working in metal finishing working part-time at Palm Technology, a finishing supplier. In 2011, he took a full-time role and worked as a designer, engineer and project manager.

Tim started his career at a manufacturer of nuclear products (Oldenburg Group), then began working at Therma-Tron-X in 2013. He has since become a mentor for the new generation.

Tom started in the finishing industry in 2005, working weekends in high school. He has worked at McGard since 2011 and has obtained ASQ SSBB and CEF-3.

Vanessa has been working with Axalta in the industry for more than six years, building a global brand and bringing in acquisitions.