A Shiny New Day for Univertical

Following $5.5 million in clean-up costs shared by Univertical (Angola, IN) and state and local governments, Chuck Walker’s company is ready to expand operations in supplying anodes and chemicals for the worldwide plating industry.
#plating #pollutioncontrol 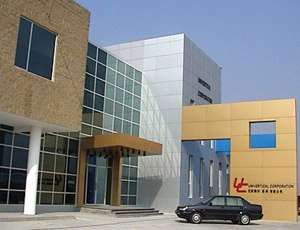 Univertical Corp. opened an office in China in 2004 to serve its broadening worldwide base of customers.

Univertical Corp. is spending nearly $3 million to expand their Angola, IN, facility that supplies metal finishing plants. The project began after a $5.5 million clean-up of contaminated soil left by the former owners of the site, Dana Corp.

Looking up at the new $3 million addition he’s building onto his existing facility, Univertical Corp. owner Chuck Walker sees progress and future growth in the plating industry.
But looking down at the soil that was once contaminated by its previous owner, Walker sees nothing more than a decade of headaches finally behind him.
Following $5.5 million in clean-up costs shared by Univertical (Angola, IN) and state and local governments, Walker’s company is ready to expand operations in supplying anodes and chemicals for the worldwide plating industry.
“We’re trying to diversify our business as best we can,” says Walker. “We think the plating business has leveled off some, but we’re trying to broaden our business scope.”
The expansion—scheduled for completion in early 2012—will allow Univertical to grow its copper anode bar manufacturing business, as well as create some new lines in a widening market that Walker wants to pursue with new products.
The company recently launched a new copper sulfate crystal manufacturing process, and wants to replace some older equipment with newer, modern technology.
Walker’s father, Charlie, started Univertical in 1938, manufacturing copper and nickel anodes for the plating industry. His products were used in the chrome plating process for automotive bumpers, grills, wheels and other trim hardware, and Univertical also made components for the Department of Defense during WWII, including bomb cluster adapters, rotating bands and other non-ferrous parts.
Charlie Walker was awarded two patents for inventions related to electroplating, and made many other process improvements for the industry. When he was 88 in 2004, he oversaw Univertical’s expansion with a new facility in China, but passed away later that year. It was soon after that Chuck Walker began dealing with the “mess” he says was left behind by the former owner of his current facility.
Univertical’s troubles actually started in 1995 when the company purchased a building from Dana Corp., a major automotive parts maker for General Motors Corp., Ford Motor Co. and others.
The building had been vacant for two years, but tests confirmed chloride and oil substances in the ground around the facility. Dana had reached an agreement with the Indiana Department of Environmental Management in 1994 to fund clean-up of the site, including a requirement that Dana operate a groundwater-treatment system to keep the groundwater from contaminating the city’s water supply.
But things went sour when Dana filed for bankruptcy protection in 2006, then asked a court to shield it from any further responsibility to clean the site, which was by that time occupied by Univertical.
The soil issues became a bigger problem when contaminates left behind by Dana began appearing in ground wells around the facility, including an Angola Water Treatment plant less than 1,000 ft away.
Shortly after the Dana bankruptcy filing, IDEM announced that it would cost at least $5.5 million to clean up the site. At the same time, Walker and Univertical were starting to be wooed by several neighboring states about relocating and expanding their operations.
North Carolina was bold enough to offer Univertical over $1 million in incentives to pack up and move into new facilities. But Walker felt an obligation to stay in Angola, and turned to local governments and Indiana officials to work out a solution.
Steuben County quickly announced that they would invest $1 million into the clean-up project to match a promised $1 million investment on Univertical’s part. The City of Angola then obtained a loan to fund the rest of the clean-up and Univertical announced that it would stay in Indiana and expand its operations.
Helping the project along was an agreement to receive 300,000 shares of Dana stock, which Angola officials promptly sold for almost $2 million to help pay for some of the cleanup and for new sewers in the area.
“These types of negotiations are always challenging, and so I want to commend Mayor Richard Hickman and Chuck Walker for going the extra mile to reach an agreement that benefits all sides,” says Indiana Attorney General Greg Zoeller.
“At a time when Hoosiers are concerned about the economy, I am pleased that we can preserve jobs in Angola. At a time when Hoosiers are concerned about the environment, I am pleased that we can start the process of removing a source of pollution without the burden of footing another bill,” he says.
The City of Angola was happy to get the property cleaned, as well as keep Univertical in the area.
“I am extremely appreciative of all the hard work and the collaboration of ideas that has brought this project together,” says Mayor Hickman. “This was truly a public and private partnership in solving this problem that allows us to clean up an environmental problem and keep a viable company in our city.”
Walker expects his company to grow to more than 70 employees from the 55 it had in 2010. “The issue with the contamination certainly held us up, but now that it’s being completed we can finish the expansion and get things moving here,” Walker says. “We’re excited to get everything behind us and move forward.” n
For more information on Univertical, call 260-665-1500, or visit Univertical.com.