Creating a process that requires a “mirror finish” is a daunting task, to say the least. Whether you are working with brass door hardware, beautiful hunting or kitchen knives, zinc plumbing hardware, aluminum light reflectors, truck running boards or aluminum high-end wheels, it is challenging to get a metal surface to the point where you can see a reflection. Thankfully, there is an entire industry that achieves this goal each and every day due to its dedication and use of the right technology and tools.

To achieve the desired finish, the part’s surface must first be properly prepared. In some cases, parts start with a very rough surface. Many parts require processing the surface with a series of abrasive belts and other abrasive products. Operators often like to find the finest grit that can be used in order to get to a pre-buffing stage. On some parts, due to their rough starting point, this could still be an 80 or 120 grit product. On parts starting off with better overall surface quality, you can often start with grits in the 220 range, and then follow that with a couple more grits, such as 320 or 400, before beginning the surface buffing process.

Time spent early in the finishing process will greatly improve results and minimize the time required at the end of the process, inevitably reducing the overall cycle time and, just as importantly, improving part quality.

One possible solution is to use coated abrasives, as opposed to trying to “buff through” the problem. Too often, a sisal-type buff is used on a part surface, which is very rough to start, and a massive amount of compound is used each minute (set to spray every 2-3 seconds) in order to cut through the rough top layer of part material.

Alternatively, in many cases, when the part shape/design allows, a flap wheel or flex drum can be used for a faster and more economical approach to the first roughing step. Instead of overheating the surface of the part with sisal and compound, the flap wheel removes that rough layer and allows you to get to a layer that is more in line with the finish that the customer wants. At this stage, you can then buff that layer to obtain the mirror or near-mirror finish, using only a minimal amount of compound in the process. 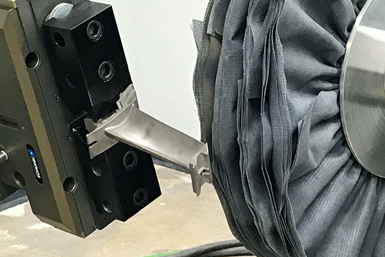 The Fixed Abrasive Buff is produced using a specialized manufacturing process that incorporates the abrasive grain into the buffing wheel cloth.

This is where the new Norton Fixed Abrasive Buff (FAB) is particularly effective. While conventional cotton or poly-cotton buffs are often used for the cut portion of the process, they too require a great deal of compound to achieve the mirror finish with a single-digit Ra. Compound, as nearly any long-term buffer can attest, seems to “go everywhere” except where you want it to go. The air current around a spinning buff is tough to break through, and thus, much of the compound does not make it to the buff.

When it comes to compound, some operators subscribe to the adage — “if a little works then a lot must be better.” This is not always the case. Compound does not like to stick to compound, so, when too much gets on the buff, the excess will simply end up getting flung off and become a clean-up issue.

The Fixed Abrasive Buff (FAB) technology is produced using a specialized manufacturing process that incorporates the abrasive grain into the buffing wheel cloth. This allows the FAB to give a greater rate of cut while using noticeably less compound during the process. Some users report that they have reduced their compound usage by 80% on some small buff operations. This not only saves upfront costs on the compound, but it also reduces downstream costs for the pre-plate or pre-anodizing operations.

Benefits of Norton’s FAB technology include cost savings from using less compound, longer abrasives life, less clean-up and, in many cases, the ability to shorten cycle times because the buff always has cut to it. While FAB has no claims to be a color buff, it is able to achieve a single-digit Ra finish on nearly all substrates. FAB is designed to provide users who have automatic, semi-automatic or even robotic buffing systems with an alternative to the conventional heavy compounds used with airway buffs