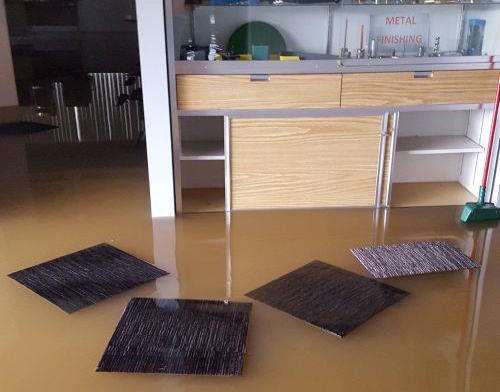 The last time Microfinish and its owner, Bill Stock, went through a natural disaster, it was over in a matter of minutes. A tornado struck his St. Louis electroplating shop in 2010 and tore the roof and doors off his building and collapsed a 40-foot wall.

The latest disaster to strike Microfinish came in late December and took its time. Flood waters had swollen a nearby creek after more than 13 inches of heavy rains sent the Mississippi and Meramac rivers over their banks.

“The water came in the door on a Tuesday and left on a Thursday,” says Stock, whose company was a Products Finishing Top Shop last year. “The authorities told us we would be safe by 2 feet, but it just kept coming and coming.”

The water went 40 inches high inside Microfinish offices and plating operations, damaging carpets, walls and several pieces of equipment. Luckily, the shop had loaded its tractor trailer and hauled away customer parts and other equipment.

“It flooded us on December 30 and 31, so the good thing was that most of our customers were shut down, and we could work to get back up,” Stock says. The company re-opened its doors on January 5 and was fully operational.

“My staff was just amazing,” he says. “The employees and the manager jumped right in to help. My wife came in, and one of my managers, Eric Weidler, had his wife and kids come in. They were just incredible.”

Stock estimates it will take three to four months for the insurance to kick in so that he can replace flooring and walls that were destroyed. He also has noticed some motors have malfunctioned from the grit deposited by the water.

Stock says his customers were understanding, but the holiday break did help. Even competitor Commercial Plating chipped in to help him.

“I know this is weird to say after this latest disaster, but I am a blessed man.”

Originally published in the March 2016 issue.