Mother and daughter team up to run a Brooklyn finishing shop that focuses on the medical sector.
#plating #medical

The company also offers pickling and passivation services in addition to electropolishing.

Control Electropolishing employs tanks that are 10 feet long and 4 feet deep, capable of handling a wide variety of part sizes and shapes.

Nancy Zapata is the president and CEO of Control Electropolishing in Brooklyn, New York, but she also has given herself a less glamorous title, of which she is just as proud.

“I am also the head bathroom cleaner,” she says. She keeps this title as a tribute to where she started in this company three decades ago and as a reminder that she isn’t above anyone else in the 20-plus-employee company. 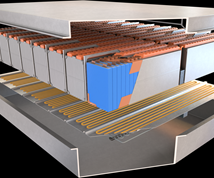 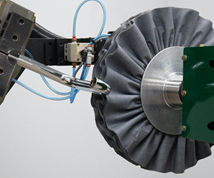 Her daughter and Control Electropolishing’s vice president of operations, Lina De La Cruz, has been involved in the company ever since she was an infant and her mom took her into work with her every day. She, too, knows that she is part of a large team of employees that has helped grow the business.

“I’m the junior bathroom cleaner,” De La Cruz says. “Everyone here does what needs to be done to make us successful. The focus is on the customer, and we do whatever it takes to make sure we are delivering the best we can.”

In 2017, Zapata was honored with the National Association for Surface Finishing’s Award of Merit for her “dedicated work in the industry over the past 26 years and establishing her company as a Minority Woman’s Business Enterprise.” The NASF also noted that she has been training her daughter to take over the company and “has provided a foothold where women can be part of the surface finishing industry, too.”

Control Electropolishing, the modest operation in one of New York City’s toughest boroughs, is bustling on a recent morning as parts are unloaded from trucks coming into the shop along a crowded, narrow street populated by parents walking their children to school, and commuters zipping through in cars and cabs.

Soon, however, growth in Control Electropolishing’s business may dictate a move to a bigger location.

“We won’t be in this location for long, I don’t think,” Zapata says. Although the industrial finishing shop has been here since 1972, she acknowledges that it also probably no longer fits into the surrounding community, which is now populated by co-ops and other housing, of which there is a huge shortage and pressure to construct more.

“We will definitely move our offices very soon, and maybe in the next two years we’ll have found someplace else to set up shop,” says Manuel Acosta, Zapata’s husband and the company’s director of operations. “But it will be a positive for us, because we can add capacity and expand for our customers who depend on us.”

Business has been good for Control Electropolishing, one of the few finishing operations in North America that specializes in, as the name implies, the unique polishing application which removes material in order to get a surface smooth and shiny. Thanks to the company's expertise and commitment to customer service, business has been growing about 20 percent per year.

Although the company also offers pickling and passivation services, electropolishing has been its expertise for decades, ever since Charles Morla Jr., a finishing chemicals salesman, started the operation in 1959 after noticing a dearth of electropolishing operations.

“The commitment to customer service has really paid off for us,” Zapata says. “Customers know that we know what we are doing, and they rely on us heavily. Everyone on our team knows that we are here for the customers.”

Assuming ownership had been in the works at Control Electropolishing at least since 1981, when Zapata was just starting out and not certain of where her career would take her. She once wanted to be an architect or engineer, but she went to a secretarial trade school in Brooklyn and learned to type and operate office machines. Morla called the school one day after he and his wife, who was also the office manager, had a spat, as husband and wives sometimes do when they work together.

“She didn’t want to work with Charlie anymore, so he hired me to take her place,” Zapata says. “I had no idea what they did here, but it fascinated me. I would hang around the lines all the time, trying to learn everything I could about the business, because I needed to understand what it is they were doing.”

Zapata grew in her responsibilities from answering phones and opening mail to helping Morla run operations in the shop. A few years later, Morla began developing early symptoms of Alzheimer’s disease, and Control Electropolishing came to a crossroads as to who would lead the company and keep it running.

Zapata and another manager worked out a deal to buy the shop from the Morla family in 1991, just 10 years after she joined the company as a secretary. In 1995, she bought out her partner and became the sole owner.

“It was a little frightening to do this all on my own, but I needed to do it to keep the company going and to keep a job for myself,” she says. “I had some really great employees here, and they supported me. I learned a lot from Charlie, and I tried to treat all of our customers like they were the most important part of our business, because they are.”

Electropolishing, also called electrochemical polishing or electrolytic polishing, is utilized by manufacturers to polish, passivate and debur metal parts, and may be used in lieu of abrasive fine polishing in microstructural preparation. It commonly is used to finish medical, surgical and dental instruments; boating, fishing and swimming pool accessories; pharmaceutical research equipment; meat and fish hooks; stampings; and wire goods.

In 2007, Control Electropolishing expanded its process lines, adding a pickling and passivating system. This growth was made possible by funding from the New York State Department of Economic Development’s Environmental Services Unit. The shop also replaced the use of nitric acid in its passivating line with more environmentally friendly citric acid.

“We are a conformance-to-requirements organization,” De La Cruz says. “We established a climate favorable to quality, so those conditions that are averse to quality are prevented or receive early detection.”

But in 2014, Control Electropolishing had its livelihood tested when a former employee exposed environmental risks in the company’s processes to regulators. Zapata says it nearly put her company and its employees out of work.

“But we fought back and put ourselves right back on our feet,” she says, adding that they turned a negative situation into something that helped them in the long run. The shop re-evaluated its environmental operations and has since become cleaner and greener, she says. Since 2014, Control Electropolishing has been able to boast zero discharge of industrial waste.

Recently the shop also validated all of its equipment and processes to comply with Code of Federal Regulations Title 21 Part 820, which is the standard for medical devices subcontractors. It also replaced all rinse tanks, “which increased our capacity by 20 percent, in order to continue to satisfy our metalworking customers,” De La Cruz says.

In the next year, Zapata says the shop will remove older, less-effective machinery to expand treatment areas. The Rochester Institute of Technology, in conjunction with the Industrial Technology Assistance Corp. (ITAC), is conducting an environmental study to reduce the shop's solid waste to its minimum exponent in a quest to reduce its footprint on the planet.

Changing of the Guard

Zapata has dedicated her professional life to growing her electropolishing business, but she has tried to branch out as a person, as well. While running the company, she earned a master’s degree in education, another passion of hers. She is also president emeritus of St. Nicks Alliance, a nonprofit community development organization serving low- to moderate-income North Brooklyn residents. She is an avid reader and dedicated tennis player who lives in Queens with Acosta and their son Alex.

Zapata’s goal is to turn over operations to her daughter when she and her husband step away from the business in a few years. De La Cruz, who currently is vice president of the Masters Association of Metal Finishing, the NASF chapter in New York, looks forward to continuing the work.

“I really love being in the metal-finishing industry,” she says. “I like the work we do, and the people we are working with, both inside and out.”