Bales discusses growing up in the electroplating business, her experience as a woman in leadership and the value of industry associations.
#leadership 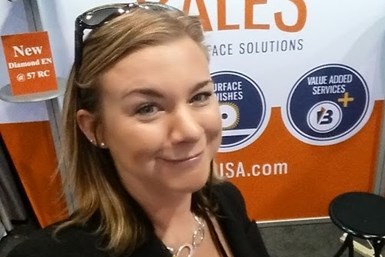 Bales Metal Surface Solutions (Downers Grove, Ill.) was started as a small polishing service by brothers Steve and Mike Bales in 1978. The company grew into a finishing operation offering chrome, nickel and composite electroless nickel (EN) coatings and more than 40 years later, the family business is carried forward by Steve’s daughters, Stacey Bales and Sara Mortensen. In 2009, Stacey Bales became president of the company at the age of 27 when her father unexpectedly passed away. In the following interview, Bales discusses growing up in the business, her experience as a woman in leadership and the value of industry associations.

PF: Describe your experience growing up with the family business.

How Artificial Intelligence Will Revolutionize Your Business

SB: We grew up about two blocks away from where our current shop is now, and I remember vividly in the summers when my sister and I needed a few dollars to go get ice cream, we would ride our bikes down to the shop and hang out with dad for a little bit. When we were about 12 years old, we started cleaning offices and that kind of thing. We grew up here. We knew all the employees. Our family worked here. So it’s the home away from home. I worked in just about every position, made my way up to the front office and kept going from there.

PF: Can you talk a little bit about taking over the business when your dad passed away?

SB: It was totally out of the blue. There was no illness there or indication that something like that would happen. We were fortunate that he built up such a great team here at Bales.

He was very open-book management and over the years really did a lot to make sure that when he was out of town that we were capable of handling things without calling him every five minutes. He was so patient and encouraging about everything. There was just no stupid question. He was so thorough in his explanation of why you do this or that and gave you the meat behind it so that you could understand so that maybe next time you could make the decision on your own. He set the example of how to treat people around you and how to encourage them and help support them. He was just a huge mentor.

My sister Sara came on full-time at that point. She and I have been able to get a really good support team around us from outside associations and mentorships in addition to the employees — people that have been doing their jobs for 20-30 years. It’s really been a group effort.

PF: Can you talk a little bit about how the industry has changed since you started your career?

SB: When I first started out we had a very basic ERP system — it was mainly just to handle the financials. In the last 20 years that I've been here, it has been amazing to see how much the technology has changed. Plating has been around for so long, and the science of it doesn’t seem to evolve very much, but there are still so many opportunities for technology in our industry for more robust ERP programs and honing in on the metrics to measure and define processes.

PF: Can you talk a little bit about your experience as a woman in what might be seen as a male-dominated field?

SB: Growing up here at the shop, everybody here kind of takes you under their wing and being kind of a tomboy myself, I just didn’t really see those defined gender roles. I didn’t feel growing up that a man should do this and a woman should do this.

I think women sometimes don’t give themselves enough credit. If you are in a position, it’s because you’ve earned it. I think women definitely tend to compare themselves not only against other women, but against men as well. But, you’ve just got to straighten your crown and walk tall. I think sometimes even just portraying confidence and having other people see you as confident makes you more confident.

PF: What advice would you give to people who are just starting out in the industry?

SB: Don’t give up. It’s hard with some of our apprentices; everybody kind of wants to go from zero to 60 in 3.2 seconds, and it can be a tough trade to learn. I don’t think people realize how much goes into actually physically plating a part or the science and chemistry involved. It takes a little while to learn the basics and it takes even longer to be skilled enough at it to where you're finally settled into your career and making the dollars that most people want to make. So just stick with it and keep pushing forward.

The biggest thing for me has been utilizing the associations. The National Association for Surface Finishing (NASF), here in this area is amazing. The Chicago branch is awesome. Reach out to them and the AESF foundation for training courses and also just for mentorship. Meeting other people that are doing similar things that you’re doing, and really understanding the different career opportunities and the different positions available within the industry, is critical to achieving success.

Listen to an interview with Stacey Bales as she discusses her experiences as a woman in leadership as part of Products Finishing’s On the Line podcast at pfonline.com/podcast.