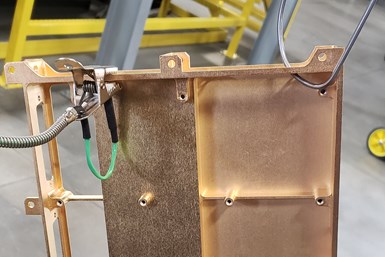 Andrews Powder Coating Inc. (APC, Chatsworth, Calif.) has been one of Product’s Finishing’s Top Shops three years running. Founded in 1980, the company is the oldest job shop powder coating facility in the greater Los Angeles area, and owner Scott Andrews has been at the helm of the APC for 30 years. Andrews got his start in the industry at the age of 28 as a self-proclaimed gearhead who spent the early years working on car and motorcycle parts. But he had even bigger aspirations for the business with sights set on growing into the architectural and aerospace markets. In those days, there wasn’t a lot of powder coating used for high-performance applications.

“In the early days, there just weren’t enough specs for powder coating,” says Andrews. “Engineered drawings that came out in the 60s, 70s and 80s all had liquid paint specifications. So even though we had a certification, and we wanted to do that work, the real specialty work was still really out of touch.”

The company is a first-tier supplier to Gulfstream, Teledyne Brown Engineering, Aerojet Rocketdyne, Aerovironment and other progressive aerospace and military companies covered by NDA’s. It has worked with Boeing, Saffran and Raytheon.  True to form, APC keeps pushing into new territory and the 40-year-old company has been doing some very specialized work the past few years.

In 2016, Andrews got a call from a major defense contractor interested in using MIL-SPEC powder coatings for an upcoming project for a classified military satellite program. The project came with a caveat: progress would be slow-moving at first, but then gain momentum as it approached testing and qualification. Andrews was all in. The inquiry set APC on a three-year project to get MIL-SPEC powder coatings certified for space flight. 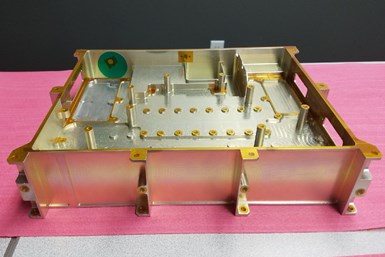 Hard anodizing had proven difficult for the intricate masking that the complex parts required.

The basis of the project was to find a replacement for hard anodizing on power supplies for satellites. In the past, anodizing had proven difficult for the intricate masking that the parts required. In addition, more electrical resistance was needed than the hard anodizing was providing. Andrews started out with a few test samples and sent them back to the client for evaluation and testing. The early tests included electrical resistance and outgassing tests. As promised, the process was slow going at first.

“The gap between these talks and test submittals was sometimes months,” says Andrews. “The next call would come, and the process would start up again. Our contact had warned us that this was like a slow-moving elephant that would pick up steam as it got closer to the test schedule deadline.”

As the work continued, APC conducted side-by-side material evaluations of powders from different manufacturers in hopes of zeroing in on what they were trying to accomplish. Some powders that performed well for the intricate maskings proved to offer too much electrical resistance.

“We had to get the right powder to fit the right application at the right thickness and apply it according to the manufacturer,” says Andrews.

As promised, pressure began to get very intense as the scheduled Quality Review Board (QRB) review date drew closer. APC had many sample parts coming in both from the client and an associated contractor.

“The testing was exacting and critical; the timing was also tight as we got closer,” says Andrews. “We used our in-house laboratory, our client’s facilities and also third-party laboratories to assist in this rigorous process.” 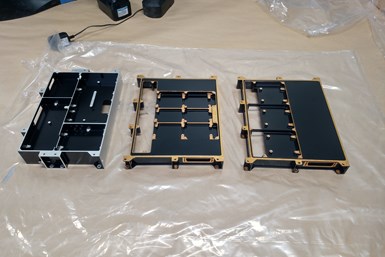 During the course of testing, APC evaluated different pretreatments (clear and gold chem film shown here), as well as different﻿ times between pretreatment and coating of the parts.

During the testing phase, APC tried micro blasting on gold-plated aluminum to see if it could pick up adhesion benefits. It evaluated different pretreatments and times between pretreatment and coating of the parts. Andrews says all of the testing allowed APC to iterate and try different things.

“It was interesting,” Andrews explains. “Here in Southern California, because it’s so dry, we saw no difference between pretreated parts that we coated within 24 hours and parts we let sit for two weeks. These were the kinds of interesting things we learned as we did all these tests.”

Once all the testing was complete, APC had chosen a powder and had figured out the substrate pretreatment. At that point, the client sent the actual (non-flight) parts for coating. These would be the parts that would face evaluation before the QRB. Ultimately, APC passed the QRB engineering review and have now been granted MIL-SPEC fight certification. Most importantly this powder coating MIL-SPEC certification will apply to all divisions of this manufacturer. This allows APC to provide MIL-SPEC powder coatings, pre-approved with no further certification required.

“The good news is that powder coatings have now taken a giant leap for the powder coating industry in space,” says Andrews. “This market will only keep growing and we aim to be a major supplier to those first (and second) tier government and private contractors as the demand increases.”

Powder coating is gaining a fair amount of attention for space applications. NASA and the University of Central Florida (UCF) have been working to develop a new high-performance polyimide powder coating.

When Andrews thinks back to those early days of powder coating, he seems a bit amazed and delighted at how far things have come. Powder coating didn’t have the same kind of acceptance that it does now. He recounts a conversation from his early days with a company around the corner who made rocket parts.

“I was told by an engineer that you can't use powder coatings in space,” says Andrews. “He told me they outgas too much.”

Through the years, Andrews questioned what had at one point seemed like gospel from a rocket scientist. How could powder, which is a 100% solids product, outgas more than a liquid coating? One of the early tests for APC’s satellite project was an outgassing test and Andrews says the powder passed with flying colors.

“So, that was an area that the powder performed very well and one that I had questioned,” says Andrews. “It confirmed my real-world thinking, based upon what I understood about how the powders are made.”

Having a MIL-SPEC certification for space flight is a big feather in APC’s cap for sure, but the implications reach further than that. The qualification means that the powder is pre-qualified for a range of high-performance applications. APC is using it as jumping-off point for further growth in this area. The company is now working toward AS9100 certification, which Andrews says should be complete mid next year.

“We're doing more and more work for these types of first-tier and large second-tier contractors,” says Andrews. “We want to be able to play the game on their level.”

It’s obvious talking to Andrews that he’s excited about what the future holds for powder coaters. From aerospace and space applications to coatings for additively manufactured parts and ever-evolving advanced materials, the possibilities continue to grow.

“It's an exciting time for me because I can see that the world is catching up to our industry. For so long, we languished in the shadow of the liquid paint world,” says Andrews. “And finally, the powder coating world is being recognized as an alternative that has many benefits beyond what you can get from liquids — especially environmentally. I'm really happy to be part of that movement and to try to push our coatings out there into the world.”