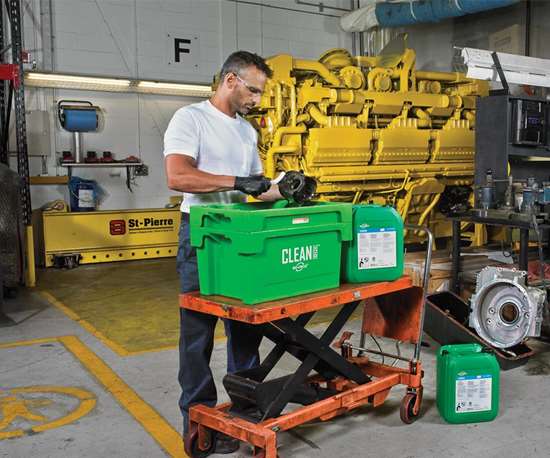 For more than a century, manufacturers, maintenance and repair operations and armed forces have used toxic solvents to clean contaminants from metal parts. However, trichloroethylene and other solvents have come under increased scrutiny for their health and environmental risks. As a result, solvent users are seeking greener alternatives as more companies are beginning to understand the benefits of safe and sustainable operating practices.

What Is Aqueous Cleaning?

Through the years, manufacturers have used a variety of hydrocarbon/organic solvents to clean and degrease metal parts. Some of the most commonly used solvents include trichloroethylene, methylene chloride, toluene, benzene, mineral spirits, methyl ethyl ketone and other hydrocarbons.

While chemical solvents are effective at removing grease and other fluids from metal parts, many are harmful to workers and the environment. For example, perchloroethylene and trichloroethylene—two commonly used industrial solvents—are volatile organic compounds (VOCs) linked to a number of health problems, including an increased risk of cancer.

In sharp contrast, aqueous cleaning solutions, which use water as the primary solvent, contain no VOCs. Unlike many petroleum-based solvents, aqueous cleaners are nonflammable and overall, are less toxic than solvents. Commonly used methods of aqueous cleaning include:

Although their cleaning methods differ from solvent-based systems, aqueous cleaners have proven to be just as effective. And because they’re safer to use, aqueous cleaners offer a number of other advantages that can benefit the bottom line.

In one example, Inner-Tite Corp., a manufacturer of tamper-resistant security products for utility company devices, switched from a vapor-degreasing parts cleaning process to an aqueous cleaning system. The Holden, Massachusetts-based company was able to eliminate its use of trichloroethylene (TCE) entirely. The factory became safer because the employees no longer were exposed to TCE—a suspected carcinogen—and the company saved nearly $2,500 per year in TCE purchasing costs.

By eliminating the annual use of 2,675 pounds of TCEs, Inner-Tite no longer had to report its TCE usage to state environmental authorities, saving an additional $1,100 in annual regulatory reporting fees. While reducing air emissions below the threshold for a minor-source generator, removing TCE from the facility also reduced the amount of time dedicated to preparing for emergency response and complying with OSHA and environmental regulations.

Bio-remediation is another twist on aqueous cleaning. The bio-remediation process has naturally occurred for millions of years, and has been recently harnessed to provide a safe, effective alternative to solvent-based cleaning systems.

In the bio-remediation process, live microorganisms within aqueous cleaning fluids break down oil, grease and other organic contaminants. Typically, the process takes place in a parts-cleaning sink, and the bio-remediating fluids require heat for optimal performance.

In much the same way that humans live by eating, breathing and producing waste, the microorganisms consume and digest the contaminants and convert them to harmless byproducts—mostly water and carbon dioxide.

“It’s a very simple chemical equation,” explains Patrick LaPointe, Vice President of Research and Development for Walter Surface Technology, which makes Bio-Circle aqueous cleaning products. “The microorganisms break the chemical bonds in the complex hydrocarbon chain, they derive some energy from the process, and the molecules take on a simpler chemical form as water and carbon dioxide. It’s a totally natural process.”

During bio-remediation, live microorganisms within aqueous cleaning fluids break down oil, grease and other organic contaminants

By converting oil, grease and other contaminants into harmless byproducts, bio-remediation can help companies reduce their chemical-waste footprint—and not just on the factory floor. Bio-remediation has been used to help clean up large-scale environmental accidents, including the 2010 BP Deepwater Horizon disaster, which discharged nearly 5 million gallons of oil into the Gulf of Mexico.

In LaPointe’s experience, most manufacturers shift to aqueous cleaners because they want to adopt products and processes that are safer for their workers and the environment. However, new customers are pleasantly surprised to learn that bio-remediating fluids (and aqueous cleaning fluids in general) maintain their full cleaning power longer than solvents.

“The beauty of bio-remediation is that it is self-renewing,” LaPointe explains. “When you ‘feed’ these microorganisms with hydrocarbons, the microorganisms live on, and their initial cleaning power stays the same for several weeks.” Also, the cleaning agents in the solution will saturate at a slower rate than solvents. While solvent cleaners begin losing strength soon after first use, requiring users to replenish their supplies after eight to 12 weeks, bio-remediating cleaners maintain efficacy over the course of one to two years, according to LaPointe.

The use of solvents can lead to potential additional costs, such as:

Aqueous cleaning products, which are nontoxic, nonflammable and emissions-free, remove these costs from the equation.

Howard Case, maintenance manager for Leesta Industries Ltd., a Montreal-based manufacturer of aerospace components, says that one of the key benefits of aqueous cleaning liquids such as Bio-Circle is that employees can use them without wearing burdensome personal protective equipment such as respirators. “It’s an excellent concept,” Case says. “The [Bio-Circle] liquid leaves no residue on the parts. It’s environmentally friendly. It’s warm, instead of leaving a cold feeling on the hands, so it’s easy to use. Its health rating is excellent so you don’t need to take special precautions.”

By making the workplace safer, aqueous cleaning systems also mitigate the hidden costs associated with exposure to harmful solvents (such as the missed workdays and lost productivity resulting from chemical-related illnesses and injuries). Through the years, high-performing organizations have demonstrated that strong environmental, health and safety programs are linked to higher employee productivity, morale and job satisfaction as well as lower turnover.

“When you switch to an aqueous cleaning system, you’re not exposing your workers to a hazardous solvent anymore,” says Jason Marshall, laboratory director for the Toxics Use Reduction Institute’s cleaning laboratory in Lowell, Massachusetts. “Their stress levels will be a lot lower. Their PPE requirements will be a lot less. They’re going to feel a lot of the psychosocial benefits [of safety] that you really can’t put a price tag on.”

Even harder to quantify, but no less important, is the business value of investing in technology that supports workplace safety and environmental stewardship. As investors, customers and suppliers are placing an increasingly higher premium on environmental-friendly business practices. Maintaining a robust safety and sustainability program can be a competitive advantage.

No Longer a Niche

Aqueous cleaning has evolved into a mainstream technology over the past two decades. Walter Surface Technologies, whose product portfolio includes bio-remediating and bio-renewable cleaning liquids and parts washers, now operates in seven countries. “Green cleaning isn’t a niche anymore,” LaPointe says. “We’re not talking about the early stages of technology here. This is mainstream, and more and more companies are adopting this technology as it’s proven to be a reliable, safe and cost-effective method to clean parts.”

As regulators and corporations ratchet up expectations for safety and sustainability, the role of the EH&S leader will continue to grow in importance. Here are steps they can take to make an immediate positive impact with aqueous solutions:

For more information about Bio-Circle from Walter Surface Technologies, call 860-298-1100 or visit biocircle.com.

Originally published in the November 2016 issue.