Blisters in the Powder Film

What is causing the coating defect that randomly shows up on our parts, and how can we cure this problem? 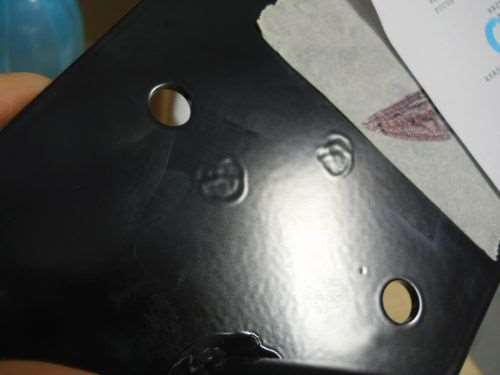 Q. We have to scrap more parts than we like because of the defect shown in the image and described below.
1) Have you ever seen this defect before?
2) What do you think causes the defect?
3) How do other people cure this problem?
4) If others are not having this problem, what is different about my process that causes it?

Over the past several years, we have had this coating defect resembling a crater randomly show up on coated parts. After examining countless number of these defects, no substrate abnormality has been found under the paint on the part, including scale, gouges or substrate craters. Paint adhesion in the defect area also has been excellent. If it were not for the coating disfigurement and color shade difference on lighter parts, no one would know there was a cosmetic defect. 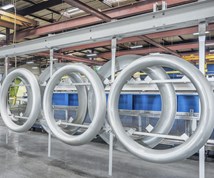 2020 Top Shops for Electroplating and Anodizing 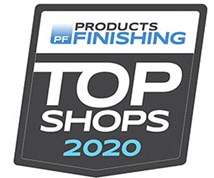 The material is 11-gauge hot-rolled, pickle and oiled, temper-rolled steel. Parts are sprayed with a solvent degreaser made up of 13 percent dipropylene glycol methyl ether and 87 percent petroleum hydrocarbon. A dwell time of five minutes is allowed to break down the molecular composition of the soil, and then a solvent-saturated towel is wiped across the part to loosen the soil. Next, a clean, dry towel is used on each part to remove the loose soil and solvent. The oil/grease-free, dry part is then sanded to remove any metal defects or contamination, including defects such as weld splatter, rust, weld burn, polymerized hydrocarbons, surface scratches and surface gouges. Parts are then sprayed again with a solvent and the first step is repeated to remove any tenacious soil that may be a byproduct of the sanding process. (Contaminates such as silica, metal fines and environmental shop soils could produce a paste-like soil from the heat and rotation action associated with the sanding process.) Parts finally are placed on a monorail conveyor line and passed through an 11-stage washer that is 160 feet long.

The MSDS sheet on the rust preventative included a vague description that it is formulated from petroleum-based mineral oils. When the steel is being cut or welded, the amount of smoke and color suggests the formulation contains a higher carbon content than 17 carbon atoms per molecule. Additionally, the oil slightly strings when tested between the finger tips, which could indicate the presences of polymers in the rust preventative.

Parts are dried at 275°F for 20 minutes, and a polyester TGIC powder is applied by an automatic paint booth. A manual paint booth is used for paint touch-up. Parts are then cured in a long-wave infrared oven for 60 seconds followed by a convection cure time of 60 minutes at 400°F.

We never see this type of problem on heavier-gauge material, only pickled and oiled material of 11 gauge and higher. Cold-rolled material has not shown this problem.

The job we ran prior to the pictured defect part was fine as were the jobs directly behind it, however, 12 out of 20 parts processed on this job displayed the pictured disfigurement to some degree. Therefore, we ruled out the washing and pretreatment process and determined that the source of the problem had to be the material the part was made from. This type of defect has never shown any bare metal. The surface tension of the part was not compromised prior to the powder application or the jelling process in the oven. Therefore, we believe the material could potentially become the source of the problem during the cure cycle.

We also ruled out trapped water as a potential cause because there were no areas to entrap water on the pictured part. Furthermore, the duration of dwell time and heat in the oven should evaporate any water. Although other liquids like petroleum-based oils may not evaporate, the deformity showed no characteristic signs of organic contamination like pits or “fish eyes” that are normally associated with hydrocarbon-contaminated coated surfaces.

I believe the problem could be sub-surface or capillary contamination in the steel, based on the assumption that the steel was pickled and oiled prior to the temper-roll process. Reducing the steel thickness by 0.5-2.5 percent (industry standards) to elongate and hide surface defects could trap oil in the steel. Manufacturing processes associated with making the part can produce heat that transmits to the part’s material. Furthermore, the drying and curing processes apply more heat with higher dwell times, possibly pressurizing the oil and reducing its viscosity at the same time. The low-viscosity pressurized oil would potentially seek an area of least resistance for pressure relief, and the surface of the part would be the most conducive area for the liquid to travel to. The pressure exerted by the liquid may not be enough to permeate the jelled skin portion of the uncured powder, but the center and lower portions of the powder layer may not yet be fully cured. The potential elasticity of the semi-cure portion of the coating could allow the oil solution to move it until the pressure was diminished.

The end-product of this theory would be a crater-like defect in the part. However, the change in the color shade (especially yellow colors) may indicate the presence of contamination. Then again, it may be as simple as an area of thinner coating on the surface.—D.K.

A. I have seen similar defects before where trapped moisture, usually oil, creates a blister in the film. I think you have some residual oil on the surface before you apply the coating. As the part heats up in the cure oven, it releases trapped air with residual oil under the film. The coating is actually curing from the inside to the outside, so the film is too firm at that point to allow the evolving material to release out of the film. The film raises and the material gradually dries out, and then the film collapses back onto the substrate. You may have good initial adhesion, but that area of the part is probably vulnerable to moisture penetration and coating failure in the future.

Given the preparation process, it is hard to imagine that anything is left on the surface. However, that is almost certainly moisture bubbling up in the coating, based on the appearance. It is also informative that you do not have this problem with CRS or with heavier-gauge steel. That would indicate that the pickle and oil process associated with the lighter-gauge material leaves porosity and trapped oil that is hard to remove with chemicals.

You may be able to relieve it by using a hotter dry-off oven. It is releasing in the cure cycle, so heat does cause it to evolve from the substrate. A hotter dry cycle may relieve it before coating. Try some parts with a 400°F dry cycle to see if the problem can be solved with a thermal cleaning.

You may also want to eliminate the degreasing/sanding process and just have some parts blasted to remove laser and most of the oil. It is possible that the solvent is wetting the surface but not removing all of the oil, and the sanding operation cannot dig oil out of pores in the steel.

You could have the defect inspected by a good lab to find some elemental evidence of what is on the surface. The elemental nature of the surface of the steel and the back of the coating defect could be the missing clue to the oil that is bubbling during cure.