Appears in Print as: 'The Importance of Conductivity '

Measuring the conductivity of your hard chromium plating bath can help to determine how to best optimize its performance.

Why conductivity is important 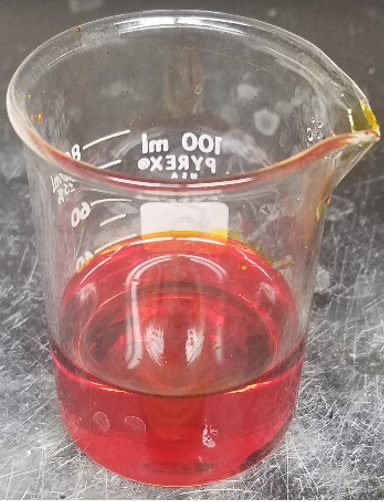 Here is a new chrome bath. Notice the pinkish-red hues. The conductivity of this solution is at its peak.
Photo Credit: MacDermid Enthone 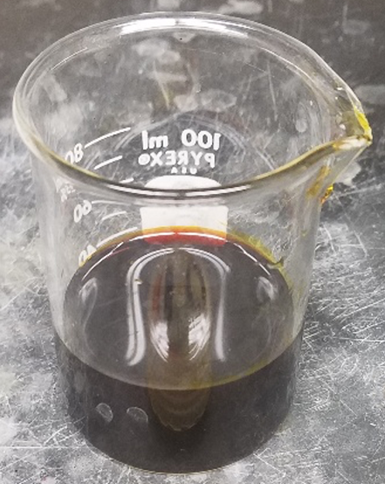 Here is an old chrome bath. Notice how dark it has gotten. This is due to contamination mainly from tri-chrome, iron, nickel, copper and other standard tramp metallics. The conductivity would be dramatically lower in this solution compared to the brand-new solution.
Photo Credit: MacDermid Enthone

Once the bath begins to build up tramp metals (typically tri-chrome, iron, copper, nickel, aluminum, zinc and hard water salts, like calcium and magnesium), the conductivity will begin to suffer. Why does it matter if the conductivity is less than ideal? In every bath, the conductivity determines how efficiently and effectively the current or amperage travels through an electrolyte. Therefore, if something is inhibiting that movement, it will inevitably have a major impact on throwing power, covering power, roughness and other important facets of plating quality.

Throwing power refers to the ability of an electrolyte to evenly distribute thickness along the current density spectrum, from the HCD (high current density) to the MCD (mid current density) and the LCD (low current density) regions. Conforming and auxiliary anodes, along with robbers and shields, are quite common with hard chromium electrolytes to prevent their natural tendency to build thickness in the HCD areas and to skip plate in the LCD regions (leading to nickel show or poor coverage).

This tendency affects both decorative and functional/engineering hard chromium formulations. Deposits from these electrolytes can often fail to cover an entire Hull cell panel more than 50-60%. Parts with a current density below approximately 40-50 ASF (amps per square foot) may not receive chrome plating at all, leaving the substrate exposed or the underplate (often bright nickel) bare and unprotected. Unplated areas are susceptible to corrosion, which increases pollutants in the bath, and they also damage the integrity and quality of the base material and/or the deposit underplate, leading to an increase in rejects.

If a clean and well-maintained hard chromium bath is notoriously poor in both throw and coverage, imagine how much worse it can and will become when the bath is contaminated with excess tramp metal ions and other impurities that impact conductivity.

Recall that conductivity is merely a measure of the level or degree of efficiency of the movement of ions through an electrolyte. Secondary and tertiary catalyst systems that utilize fluoride and other proprietary constituents and ingredients will promote better coverage, but their benefits can often be obstructed and restrained by the presence of elements like aluminum and iron that tie up the fluoride ions and weaken its effectiveness and potency.

Anytime the conductivity is altered due to chemical pollutants, the likelihood of burning in the HCD area is also increased, which makes sense since the distribution of current is hampered. Burning is a function of excessive current density outside the standard range that is required to form a smooth plated layer. Burning typically manifests in a discolored, rough and often nodular crystal orientation. The manifestation of a burn begins modestly enough but can quickly grow exponentially due to the exaggeration of the HCD areas once a microscopic asperity or protuberance begins to form and accumulate to the construction of larger and larger examples.

Some plating baths, like acid copper, are designed to fill in or level out small, microscopic projections or protrusions and scratches, but chrome does the opposite in that it highlights, amplifies and embellishes these imperfections and blemishes.

This is most clearly the case when the base material has been poorly machined and polished, which produces high RMS (root mean squared) value, meaning it lacks smoothness and often contains metallic slivers or shavings. These dendritic splinters can act as small lightning rods, like those featured on old buildings like churches. Lightning rods are designed to artificially extend the height of a building so that the lightning during a storm strikes the rod, not the building, and is then sent into the ground via grounding rods. Lightning or electricity is lazy and therefore prefers to take the path of least resistance, which is why lightning rods work.Electricity highly favors both the macroscopic (those points that can be seen by the naked eye on the part) and microscopic (those which are indiscernible to the naked eye) HCD areas (areas closest to the anode), ignoring, or barely accessing, the LCD areas. These inclinations are compounded when the electrolyte’s conductivity is further decreased in the various ways already mentioned, and therefore the presence of roughness in the form of these micro/macro filaments of chrome deposit are quite common.

Treating the bath after reaching a tolerance limit

What should an applicator do when the contaminant level has reached its apogee? There are several available ways to treat a hex-chrome bath with metallic adulterants. One method available for treating tri-chrome specifically is to subject the bath to electrolysis at high cathode current densities (CCD’s) and a low anode current density (ACD) with vigorous agitation and high temperatures. Porous pot technologies use ceramic membranes to remove contaminants and re-oxidize tri-chrome ions back to hex. Electrodialysis uses a heavy-wall polyester membrane, like the porous pot, and some utilize ion-exchange resins to treat their solutions. Oftentimes, increases to the chromic acid figure and increases to the overall chromic acid-to-catalyst (sulfate) ratio can help immensely to improve conductivity.

Water composition plays a crucial role in conductivity that is often overlooked. DI (deionized water) generally has a TDS (total dissolved solids) rating of 0 ppm whereas RO (reverse osmosis) water generally can be classified as very soft water since its hardness levels range below a TDS of 50 ppm. The hardness of tap water can vary considerably based on location, therefore, some operations may need to treat incoming water to maintain conductivity values in hard chromium baths. Even those plants that treat their water can still accumulate high levels of TDS, calcium numbers as high as nearly 70 ppm and magnesium numbers as high as 60 ppm, in the case of a recent example I encountered.

Some of the most significant sources of impact to the conductivity come from the presence of tri-chrome, iron, and nickel at around 10-12 mS/cm for every gram of contamination. A diagnostic analytical profile on a fairly new, well-maintained hard chrome bath showed a total of 10,200 ppm or around 1.4 opg of trash in the form of calcium, chloride, copper, iron, lead, magnesium, nickel, silicon, sodium, titanium, trivalent chromium and other metals. The cost to the customer with this much refuse was a full 100 mS/cm of conductivity, or approximately 25% of total possible conductivity. Imagine what sort of impact that might have on the throwing and covering power of a hex-chrome plating solution.

To combat these effects without a major treatment procedure would require a chromic acid addition of approximately 70-80 gpl or ~10 opg. A good rule of thumb is to lower the total tramp metals to under 1 gpl, or 7,500 ppm, provided the level of nickel, iron and tri-chrome is kept under tolerable limits, since these are the biggest conductivity offenders.

Hard chrome platers can learn a lot about the health of their plating bath by simply checking its conductivity versus analyzing for a myriad of various possible contaminants. Adjustments and modifications can then be made to the bath in the form of chromic acid additions, dilutions, electrolytic treatment methods or membrane ion exchange systems. If issues arise in the form of poorer-than-usual covering or throwing power, or high levels of roughness, poor conductivity may be the culprit. It is easy enough to test this theory quickly and reliably, so please take advantage of this simple but powerful measuring method when diagnosing what ails your bath.