Often, what sets one cleaning machine and its OEM apart from another is the service that comes with it. 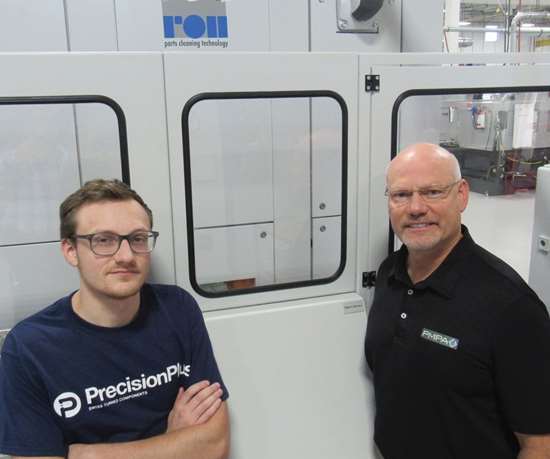 Precision Plus President Mike Reader (right) and his son and assistant production manager Ryan Reader stand in front of the Roll hydrocarbon-based cleaning unit their company purchase last October. They say they have realized many benefits from its utilization.

The Roll system was custom-built with adapter frames to accommodate the use of baskets from Precision Plus’ previous cleaning unit. Two baskets can be used at the same time, doubling throughput.

A benefit of using the Roll unit is that its oil is recyclable; Precision Plus reuses it in its screw machines. The oils are separated from the solvents using the unit’s distillation system, which continuously cleans the solvents.

Sometimes it’s not as critical to focus on a piece of equipment’s capability as it is the type of customer service received from that equipment’s manufacturer or supplier. Often, different brands of equipment can get the same job completed equally well, but what sets one machine and its OEM apart from another is the service that comes with it and that stands by long after the initial setup.

When a system fails, whether because of operator error or any other reason, it delays production of parts for a shop’s customers, the machine is deemed inefficient, and it causes stress (at the very least) for all involved. Equipment that comes with solid customer service from a supplier that understands a shop’s urgent need for service is what any shop hopes for when purchasing equipment.

Precision Plus of Elkhorn, Wisconsin, has been fortunate enough to find a parts cleaning system that comes with reliable customer service, and one that saved the company a lot of downtime when its previous cleaning system ceased production as a result of operator error in October 2017.

“I knew I would have to wait three to four weeks for service when this machine went down, and I couldn’t afford to do that,” says Mike Reader, Precision Plus president. Recognizing his desperate need for clean parts, Reader decided to take another route to solve the problem. He called on Roll, a maker of parts cleaning machines that are manufactured in Germany and headquartered locally in Indianapolis, Indiana.

Founded in 1982, Precision Plus has expanded from a startup precision machined parts shop to a successful business. The company owns 24 CNC Swiss-type lathes, nine Miyano CNC turret lathes and 70 Tornos cam-actuated machines for very small, close-tolerance work. The shop machines parts as small as 0.030 inch in diameter to parts that are 2.5 inches in diameter, using materials including stainless, carbon, alloy, aluminum and brass.

“We do a lot of work in the hydraulic and pneumatic controls area,” Reader says, “as well as a number of items for dental, medical and aerospace industries—components with a lot of tiny holes and intersecting features, where the use of the Roll machine to clean inside those nooks and crannies has proven to be beneficial.”

Reader had quickly realized he made the right decision when he chose to contact Roll for a new machine. The manufacturer had a unit on the showroom floor in Indianapolis at the time he called.

“I asked them, ‘If it came down to it, how long will it take to pack up that unit and send it here?’” he says. “They said, ‘We can have it on a truck tomorrow and to your place the following day, and likely running the day after that.’ There was no haggling about the cost, either.”

Given that Reader only wanted clean parts for his customers in a timely manner, he took Roll up on the offer, and he says the manufacturer’s word was solid. “I gave him the green light on Monday, and sure enough, that Wednesday, the truck was here, and Wednesday night, the trainer was here, educating us on how to run the new system,” he says.

The Roll Advantage model is a hydrocarbon-based cleaning unit and a larger machine than the company’s prior cleaning system. According to Reader, using the new system doubles the shop’s throughput and allows it to cue six times the quantity of parts that it had been able to handle in the prior system.

Although Precision Plus is pleased with the Roll’s performance, company management continues to also focus on the excellent customer service it is receiving with this machine.

“We can text or email the tech guys right away when there’s an issue or a question, and they get back with us within the hour,” says Ryan Reader, Mike Reader’s son and the assistant production manager at Precision Plus.

When the shop first implemented the Roll unit, one of Reader’s concerns was the fact that he had purchased expensive baskets to go with the old cleaning unit, and he didn’t want to have to purchase new baskets. Roll had a perfect solution for that: Build an adapter frame that works as a carrier and fits every kind of basket the shop already owned.

“Fifty percent of Roll machines are customized,” says Roland Schmidt, VP of sales at Roll. “We make frames for this reason all the time. We want customers to not only use our new baskets but to use their existing baskets as well.”

These adapter frames in the unit also have allowed use of two of the old baskets in the work chamber at the same time, doubling throughput.

Another concern after purchasing the new machine was preventing operator error. “We had human error with the old machine, and it put a lot of parts in places they shouldn’t go in the unit, and messed up the valves and seals,” Reader says. The Roll machine’s design naturally prevents this from happening.

“For times when the customer forgets to close the lid on a basket, Roll put an automatic basket lid inside the work chamber,” Schmidt says. He explains that another preventive measure built into the Roll consists of a second screen in front of the work chamber, so if a part is placed in the work chamber, it can’t travel to the pumps, which would cause damage.

Another benefit to the Roll machine’s implementation in the shop is that its oil is recyclable—Precision Plus reuses it in its screw machines. The oils are separated from the solvents using the Roll unit’s distillation system.

“In order to meet cleaning specifications, the unit has a second distillation tank that is separate from the system and continuously cleans the solvents; the solvents are kept at a very high level of cleanliness,” Schmidt says.

“The oil in the system is 5 percent solvent or modified alcohol/hydrocarbon, because it needs to be liquefied enough to flow out of the distillation unit. The oil is then put in a bucket or 55-gallon drum in order to be reused,” he says.

Not only does Precision Plus benefit from oil reuse from the system, but longer life of the solvent, as well. According to Schmidt, the solvent can stay in the system for a long period, since it is continuously being cleaned.

“I have customers who have not added or changed the solvent in more than two years,” he says.

Overall, he says, the Roll unit has fast throughput while also reaching the highest cleanliness specifications. “Two reasons for this are the unit’s ultrasonic system and the pressure flooding technology,” he says. “We induce up to 180 psi of solvent in the work chamber from 40 to 50 spray nozzles in order to enhance the cleaning effect while the parts are submerged.”

Cleaning Up with Time/Labor Savings

Reader describes the Roll unit, Precision Plus’ only cleaning system, as a batch processing system with an automatic conveyor heat system that allows the company to cue three baskets at a time. This permits an operator to walk away from the system for a few minutes while it is operating.

“We have seen a lot of savings in labor using this new unit,” he says. “Someone doesn’t have to be sitting there watching every basket, which frees up time to do other important tasks. It has the ability for the service team to ‘dial in’ to run diagnostics and troubleshoot the issues remotely, saving valuable time and travel expense.”

Two Precision Plus operators know the machine well and spread their time out over 16 hours, or two shifts a day, five days a week.

The smallest parts that the shop cleans in the unit are around 0.030 inch in diameter to 2.5 inches in diameter, according to Ryan Reader. Batch sizes can be from 500 to 5,000 parts, with parts either randomly placed in the basket or placed in fixtures that Schmidt describes as click-and-snap plastic inserts. They can be easily rearranged or taken out of a basket, another time-saving feature. He says there are different inserts for different types of parts as well.

The Roll parts cleaning system is the type of equipment a company typically only has one of. Therefore, it must run continually, day in and day out, reliably and efficiently, with good customer support behind it that will address a problem immediately.

“When you have catastrophic failure, as we did with our previous supplier, it creates a lot of anxiety,” Reader says. “But when you know there’s a problem and you have immediate support—you have centrally located service personnel that can be here in short order—it means a lot.”

Reader says he not only found excellent customer service when he called Schmidt; he has continued to experience it beyond the initial purchase of the Roll parts cleaning unit. Along with a custom cleaning machine that doubled Precision Plus’ throughput, the company received error prevention and “green” cleaning technology, as well as other benefits.

The Roll parts cleaning unit is a sealed system that features three mechanisms that ensure it remains leak-free, Schmidt says: