How using a stabilizer can extend your bath life and help you avoid costly system repairs.
#vacuum-vapor 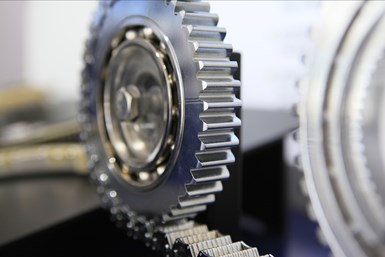 Using a stabilizer consistently can prevent problems with organic acids or sulfur compounds from occurring in your vapor degreasing system. Photo: Hubbard-Hall

Industrial parts cleaning is certainly important in the manufacturing process, as the removal of unwanted contaminants such as oil, dust or dirt from workpieces will make things go more smoothly. Although that sounds simple at first, achieving successful cleaning results takes a lot of requirements that need to be met.

There needs to be safe and proper handling of the parts and chemistry involved and an assurance that all environmental compliance issues are met. On top of that, there is usually a very high requirement from the OEM to avoid quality issues, and also a process must be in place to meet the high throughput required to meet a facility’s production goals.

There is no question that vapor degreasing is one of the best and most efficient ways to clean parts that may have oils, lubricants and other contaminants on them. Just imagine how many miles these parts have traveled since they were manufactured and you have received them, and then you can appreciate just how much the parts need to be thoroughly cleaned.

Modern equipment can be used to clean a vast diversity of parts, from small parts to pipes up to several feet long. It can usually operate a number of different cleaning programs that are tailored for the application. The machines are equipped with a side or top entry/exit, together with protected loading/unloading zones. Additional technical features ensure low emissions and increased efficiency: the abatement loop, for example, reduces the solvent concentration in the cleaning chamber before unlocking the unloading door.

A typical cleaning includes pre-washing, immersion/spraying and vapor degreasing. Within the latter, pure solvent vapor generated by the distillation unit is sent to the cleaning chamber and condenses on the cooler parts. The residual oil film is then removed; this step usually allows a very high precision cleaning.

Many studies have shown the effectiveness and savings achieved by utilizing a closed cleaning system. Examples show that modern cleaning equipment combined with chemical product services can reduce solvent consumption by up to 99.5%. This reduces overall costs while providing high-quality results and therefore maintains competitiveness.

But as the oils, greases, emulsions as well as other substances are removed from the parts, they will be transferred into the cleaning machine, and that may have a negative effect on the bath life. As is the case with all distillable cleaning agents, there is the possibility that the acid content of the medium will increase which can lead to corrosion and process challenges.

If this is happening with your vapor degreasing system, then there is a very good way to combat that from occurring with the use of stabilizers to alleviate many of the organic acids and sulfur compounds that can arise from the vapor process.

Since late 2019, Hubbard-Hall has begun working with SAFECHEM, who have enabled customers to manage those challenges as well in non-halogen solvents, such as modified alcohols.

Non-contact stabilizer can be added to the sumps and do its magic there, instead of being added onto your parts. It is added to the steam generator and takes effect in the areas where potentially harmful substances could develop. As the stabilizer remains in the distillation residue and counteracts the development of acids and sulfur there, it does not come into contact with critical components of the cleaning machine.

If you use a stabilizer consistently, it can reliably prevent problems with organic acids or sulfur compounds from happening in your system; better yet, the stabilizer can also help to extend the service life of components in your system that are delicate, such as seals, shut-off slides, valves and the copper cooling units.

More importantly, the stabilizer system is designed to help increase the life of your solvent bath, too. And if you have to consistently shut down your vapor degreasing system and refresh the solvent, you know how much time that takes, and time is money when it comes to efficiently cleaning parts. Just think of the money (time) that can be saved from not having to replace the cleaning bath so often, as well as the time and costs of having to repair the vapor degreasing components.

Another big consideration of using a stabilizer is that it can help reduce those unpleasant odors coming from the system caused by the sulfurized oils, which essentially smell like bad eggs. And no one wants to smell that in a workplace. The sulfurized oils can also cause some non-ferrous metals cleaned in the vapor degreasing machines to become discolored and sometimes tarnished, so the stabilizers also help prevent that from occurring.

Aside from the organic acids or sulfur compounds that the stabilizers help reduce, you should be aware that chlorinated oils that may be on the parts when they are brought into the vapor degreasing machine can often cause hydrochloric acids and chlorides to form during the distillation process. Hydrochloric acid can lead to corrosion of critical machine parts, which in turn results in high machine maintenance costs, or worse, complete machine failure. Hubbard-Hall began working with SAFECHEM to offer customers the MAXISTABTM S-Series stabilizers that expand the possibilities of modified alcohols by overcoming the potential challenges mentioned above.

Specifically developed for the DOWCLENE 16 Series of modified alcohol solvents, the MAXISTAB S-Series counteracts the effects of organic acids, sulfur compounds, hydrochloric acid and chlorides. Through the innovative stabilizer systems, even the cleaning of highly chlorinated oils is now possible with modified alcohols, where a more stable, more predictable and safer process is ensured. The preventive stabilization helps applicators lower cost-in-use thanks to reduced solvent consumption while protecting their cleaning systems and preserving the value of their installations.

A few of the benefits of MAXISTAB S-Series stabilizers that we have seen with applicators who use them:

In fact, one of SAFECHEM’s customers recently told them: “For about the last 11 months, we have not made any more bath changes and not cleaned the distillation either. Compared to the quarterly bath changes, this is naturally a huge saving in effort, costs and downtimes. Since the system runs continually in two-shift mode, we are talking about big savings here.”

Combining more than 25 years of experience with modified alcohols and the break-through innovation MAXISTAB S-Series, SAFECHEM developed a new pre-stabilized modified alcohol, DUALENE 1601 S. With an included alkalinity-buffer from the very beginning, the product is designed for demanding applications with high-stability requirements.

Overall, vapor degreasing is a great closed-loop system that can deliver high-quality cleaning results. Just make sure to have the supplier of your system check for the presence of organic acids, sulfur compounds, chlorinated oils and other contaminants that may occur. Properly treating these conditions with a good stabilizer will solve many of your problems, extend your bath life and avoid costly repairs to the system itself.