In an effort to satisfy the changing demands of its customers, Fleetwood RV - one of the nation's largest makers of recreational vehicles - recently opened a pair of state-of-the-art paint facilities...
#automotive #pollutioncontrol

The starkness of the unpainted RVs are in sharp contrast to the elaborate designs and sophisticated color schemes found on the finished products.

Temperature and humidity controls not only offer Fleetwood complete control over paint color and application, they also provide employees a safe and comfortable environment in which to work.

The Pace Arrow is one of 11 models manufactured at Fleetwood's facility in Riverside, CA.

If you're looking to gauge the popularity of recreational vehicle industry these days, you need to look no further than eBay®. According to the online auction giant, "RV" was its number one search term in 2004, beating out "gold," "BMW" and even "iPod."

That's good news for Fleetwood RV, one of the nation's largest makers of gas and diesel-powered recreational vehicles. Founded in 1950 and headquartered in Riverside, CA, the Fortune 100 company has enjoyed unparalleled growth in recent years thanks primarily to the emergence of the baby-boomer demographic (the median age of all RV owners is 49 years old). Also influencing the industry's expansion is the introduction of younger, wealthier buyers to the market and a desire on the part of many Americans to stay close-to-home in lieu of traveling abroad. In 2004 alone, more than 370,000 RVs were sold in the United States, industry-wide. 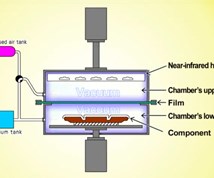 Not only are RV buyers growing in number, they are demanding increasingly sophisticated features. Flat-screen televisions, sliding walls, computer workstations, stainless steel sinks and other plush amenities have become the norm in Class A models like Fleetwood's Pace Arrow and the Southwind.

Such improvements are not limited to the vehicle interiors, either. On the outside of the RV, where gel-coat fiberglass and decal graphics used to be standard issue on all but the most luxurious models, consumers are now demanding something much more akin to a high-quality automotive finish. "As RV buyers have become more educated, they've started asking for better-quality, corrosion resistant coatings," says Brian Sheehe, operations general manager for Fleetwood. At the same time, RV manufacturers are attempting to appeal to prospects by offering greater color and design options.

It's this combination of industry growth and consumer demand that prompted Fleetwood to begin construction on a new $13 million paint facility in Riverside where 11 of the company's gas-powered brands (including the Pace Arrow and Southwind) are manufactured and painted.

Ground was broken on the new facility in February 2004. With a target open date set for just five months later - to coincide with the start of the new model year - construction was put on the fast-track. (To complicate things just a bit further, an identical facility was being built in Paxinos, PA at the same time.) For assistance in meeting the challenging deadline, the RV-maker sought help from industry suppliers Tellkamp Systems, Inc., Spray Systems Inc. and DuPont Performance Coatings.

Fleetwood and its supplier partners recognized early on that there were a number of factors unique to the RV industry - as well as the company's geographic location - that would play roles in dictating how the new facility and its choice of paint processes would take shape:

The paint lines and prep areas would have to be large enough to accommodate the largest of Fleetwood's gas-powered
RV's. That meant designing the facility around a vehicle more than 45 ft long and eight ft wide.

In response to these circumstances, Tellkamp and DuPont collaborated to design and install a state-of-the-art facility for the RV giant.

The new paint facility features a pair of identical paint lines. Each line features a mask/prep area, followed by a basecoat booth, topcoat/graphics booth, clear coat booth, curing oven and a de-masking zone. Secondary prep areas are situated in between each of the three paint booths (see Figure 1 for more details). A dedicated touch-up booth is situated off-line.

Each of the paint lines exists within its own enclosed environment. Humidity and temperature controls allow Fleetwood control over paint color and application. "Regardless of what's going on outside these walls, we have complete control over the variables within the system," says Sheehe. "Since we control the environment and the process, we don't have to worry about changing the formula of the paint."

The three-stage coating system, which uses DuPont materials, yields a finish with excellent paint adhesion, high-gloss retention and paint durability. A DuPont paint specialist works on-site at the Fleetwood facility on a full-time basis in order to assist with paint mixing, troubleshooting and other tasks.

"Our three companies collaborated to provide Fleetwood with what I think is the best environment to paint in that I think you'd find anywhere," adds Scott Bogut, director of sales for Tellkamp Systems, Inc.

Installing traditional VOC equipment sized to handle the full paint system exhaust flow volume would have proven to be cost prohibitive because of the high capital equipment costs and high hourly operating costs. "The traditional approach wasn't really practical," says Sheehe. "We'd have been looking at the prospect of moving 440,000 cfm of exhaust. The operating expenses were enormous."

Instead, Fleetwood opted for the air recirculation technology that had been proposed by Tellkamp. With that method, only a small portion of the air volume (approximately 15%) is sent to the oxidizer at one time. Consequently, much less "new air" (approximately 80,000 cfm) needs to be reintroduced to the paint booths (Table 1). And because the solution allowed for smaller oxidizers than would have been needed with the traditional approach, Fleetwood also realized a significant savings in capital equipment costs.

Worker safety is extremely important to Fleetwood. "The safety of our employees is something we're not willing to compromise on," says Sheehe. Consequently, the recirculation system completely changes the air in the paint booths - which are approximately 16,000 cu ft in size - every 90 seconds, providing the paint teams with a safe and comfortable environment in which to work.

According to Bogut, the system - though based on established technology - was something new to the RV industry. "The general idea behind the system is something that we'd been extremely successful with on smaller systems," he says. "But as far as adapting the technology for use in the RV industry? That was a whole new deal. Fortunately, Fleetwood was forward-thinking enough to say 'we know it has never been done in this industry, but we believe it will work.' That attitude is why they're a leader in their industry."

Fleetwood Enters the "Circle of Trust"

If the photo of the Fleetwood Pace Arrow on page 92 looks strangely familiar, it may be because the vehicle had a starring role in the recent Robert DeNiro comedy, "Meet the Fockers."

In the sequel to "Meet the Parents," Robert DeNiro's character - a former CIA agent - is driving his family to Florida so that they can meet their future in-laws. His vehicle of choice is a modified Pace Arrow.

Fleetwood provided the makers of "Fockers" with three Pace Arrows for use in filming. One of the RVs was cut in half for use in filming interior shots. The other two were returned to the company after filming commenced.

Of course, the filmmakers did take a few liberties with the Pace Arrow's design. For instance, the company is not currently offering screens - like the one used by DeNiro's character when he wants to have some "private time" with his future son-in-law - as an option. And some buyers may be disappointed to learn that the real Pace Arrow does not feature mobile command centers under the beds.