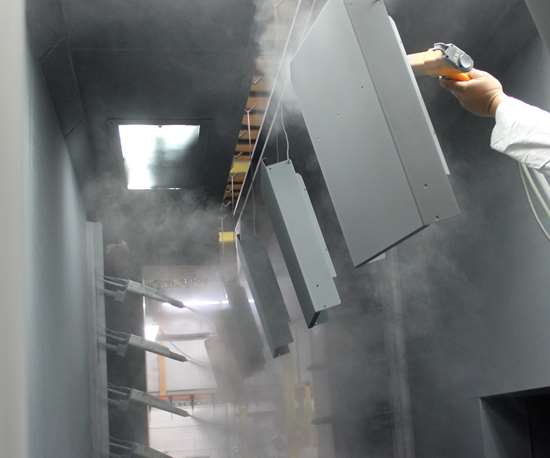 Zinc-rich primer is applied to a Miller welding machine.

Gas catalytic pre-gel ovens are designed to be placed just in front of convection ovens to gel the powder before the coated part enters the conventional convection oven.

In the gel stage, the film solidifies from a liquid to a solid (gel).

The topcoat powder is applied while the zinc primer is still at the gel stage.

Disruptive technology in manufacturing comes along rarely, but when it does, it can have a huge impact. The use of infrared (IR) in curing powder was pioneered around 25 years ago and prompted a major rethink within the entire finishing industry. Many described that technology as disruptive, and it is fair to say that there has been pushback from various corners of the finishing industry, some would say to the fear of fear itself.

Now, as manufacturing technology continues to improve and after years of practical experience, clever thinking is still being applied, and new applications are still being found for old disruptive technologies. In the case explained here, three companies working together have developed an improved coating process that provides a highly corrosion-resistant finish to ferrous substrates.

It Starts with a Zinc-Rich Primer

The story begins with Miller Electric Manufacturing Co. of Appleton, Wisconsin, the world’s largest manufacturer of arc-welding products. If you ever come across a blue-arc welder, it is probably from Miller. As the equipment is utilized in many industries and applications, its mild steel casings and panels need to be as corrosion-resistant as possible.

Focused on continuous improvement, Miller needed to improve the efficiency of its finishing plant. It was using a two-cycle process that necessitated running the parts twice through to apply and cure both primer and topcoat.

Soon, the powder supplier and IR supplier started working together, exchanging ideas and carrying out some testing. One solution involved the removal of a separate final cure process from the priming stage, and the results were dramatic. Removing just this single step enabled the reduction from a two-pass to a single-pass process, and this reduced the overall cycle time by 50 percent.

How can the removal of full primer curing be a smart move? Take a look at what is going on through the whole process: First, the parts are coated with the zinc-rich powder. Then, in a usual powder curing process, the parts go through five stages in the oven. However, when zinc powder-coated parts enter the IR pre-gel oven, they only go through four of the five stages:

Normally, in stage five, the “gelled” primer would then be left in the oven to fully cure before being topcoated and sent through the IR oven again for final cure. Some smart thinking, research and testing by the team in this story showed that a new, improved process could continue as follows:

This process would not be possible without gas catalytic IR. From a manufacturing perspective, the removal of the final cure stage of the zinc primer saves time, energy and space. But gas catalytic IR helps in four more ways:

The use of IR in industrial thermal applications has proven to be ground-breaking over the years since it was first introduced. Even now, new, innovative ways of using IR are still being discovered. In the past, powder manufacturers have understandably been reluctant to embrace IR, mainly due to fear of warranty issues. Every powder comes with a well-tested cure schedule, based on curing performance in a conventional convection oven. This forms the boilerplate instructions upon which any warranty is based. Any deviation from this potentially offers a get-out clause for the powder manufacturer.

However, the advantages of IR are such that the technology is now widely accepted across many manufacturing industries. The case outlined here shows how forward-looking powder manufacturers are embracing the technology and finding innovative ways to improve the performance of their products to the benefit of manufacturers and end users.

Chris Chapman is a technical consultant in gas catalytic IR for Heraeus. For information on Heraeus, visit catalyticovens.com.