Heating Up a Chilly Business

Black and white, which account for about 55–60% of all powder sprayed at Kysor/Warren, are still applied using automatic guns in spray-to-waste booths.

Use of dense-phase powder transport technology and an automated color-change system has led to a decrease in color change time by as much as 70 percent. Non-reclaim color changes that previously took from 1.5 to 3 minutes now take about 30 seconds.

Each display case is manufactured and powder coated based on a custom order, which means 90 to 100 color changes on average during each two-shift day. Kysor//Warren’s goal is to produce 1,000 cases per week.

Buy a pound of deli meat, a gallon of milk or a carton of eggs from just about any grocery store, and chances are, you’re purchasing product displayed in a case produced by Kysor//Warren (Columbus, GA).

The company, a manufacturer of frozen, medium-temperature and heated display merchandisers and mechanical refrigeration systems used by major national and regional grocery chains, has been in business for more than a century. Kysor//Warren differentiates itself from the competition by offering quality products customized for each order at a price with the shortest possible lead time. 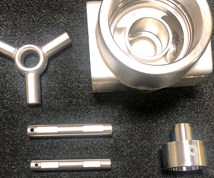 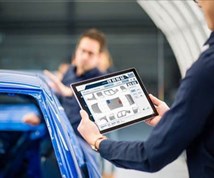 The switch to powder proved to be a shrewd move in terms of display case production, especially because Kysor//Warren gives its customers a choice of a very wide selection of standard and custom colors. “We have roughly 200 colors we’ve applied before, and we change colors 90–100 times over the course of two shifts during our peak season,” Goodson says.

According to Goodson, peak production runs roughly from April or May through October to satisfy the needs of the company’s grocery store customers, he explains. “A lot of store construction and remodeling takes place over the summer, because they want to be up and running before the Holidays,” he explains.

Kysor//Warren doesn’t paint just large, flat panels and similar parts—every painted component of a display system receives the same powder coating, according to Goodson. “Thousands of part numbers run across the line, ranging from 12 × 2 ft panels to pieces about an inch square,” he says. “The majority of them are galvanized steel, but we finish some aluminum parts as well.”

All parts receive a multi-stage, non-phosphate pretreatment consisting of an alkaline cleaner, four fresh water rinses, pretreatment, fresh water rinse, non-chrome sealer and RO water rinse. Parts are then dried in an oven for 10 min before spraying with TGIC hybrid powder material to a nominal film thickness of 2.5 mils. After coating, components spend 20 min in a curing oven at 400°F. The line runs at 18 fpm, and total paint cycle time is about 1.5 hr.

For several years the company did fine with three spray-to-waste booths—one for black, one for white, and one for all other colors. But, as business improved and Kysor//Warren moved to incorporate lean manufacturing processes to improve material flow throughout the plant, the powder coating line, and especially product density on the line, came under scrutiny.

At the time, manual color changes took roughly three minutes to clean the guns, purge the hoses and get ready to spray the next color. The three-minute color changes resulted in 90–100, 56-ft gaps between parts on the line over the course of a two-shift day—an unacceptable situation given the company’s emphasis on lean manufacturing.

By 2005, paint line managers had a target: to increase powder coating throughput by 70%. “We had to improve throughput, and we had to improve line density,” Goodson says. “Wasted space meant wasted time and money.”

The company also was looking for improved control over film thickness and less powder waste, he adds.

Kysor//Warren found the solution to its throughput and other issues in Prodigy high-density, low-volume (HDLV) application technology supplied by Nordson Corp. (Amherst, OH). Paint line managers were initially skeptical because the technology, which uses high-density powder and low-velocity air, was so new. But data from an in-house test comparing the new gun to the older technology revealed the dense-phase powder coating technology (see sidebar) did in fact lead to increased capacity and less wasted powder.

“The guns basically push less air through the system,” Goodson explains. “Our previous guns had so much pressure coming through the guns that they were basically shooting powder out and blowing a lot of it past the parts. These guns produce a softer, denser powder cloud that hangs in the air longer, and the parts basically travel through the powder cloud.”

Early in 2006, the company replaced guns in its manual booth with two Prodigy guns as well as HDLV pumps and controllers. Now, two automatic booths with reclaim capability are dedicated to black and white—very common colors for display cases, according to Goodson. “The vast majority—more than 90%—of all our cases get either a black or white interior, and we have some with black and white exteriors as well,” he says. “So probably 55–60% of all our spraying is black or white.”

All other colors run in the manual booth using the HDLV application technology, which has led to a decrease in color change time of as much as 70%. Color changes that previously took up to three minutes now take about 30 sec.

According to Goodson, the faster color changes are achieved by an automatic purgable design in both suction and transport directions in the guns. “Rather than ¼-inch rubber hoses like our previous system, which were porous and trapped a lot of powder, this system has smaller hoses that are easier to clean,” he explains. “The system purges the hoses automatically—we just push a button rather than blowing air through the lines.

Shorter color changes resulted in fewer large gaps on the line: gaps created by color changes were cut from 56 to 18 ft. The increased line density means Kysor//Warren essentially picked up an additional three hours of production time each day, all while increasing the number of color changes on the line, according to Goodson.

“We’ve increased the number of color changes, which goes against what you’d normally want when focusing on lean production,” he says. “But when you cut color change time by 70%, it works really well toward increasing production.”

The lower volume of air blowing through the system also helps. “Of course, less overspray means faster booth cleanup,” he continues. “The booth design also improves color-change speed through evenly distributed airflow and a powder-resistant canopy, so airborne powder can be evacuated quickly during color change while eliminating cross-contamination.”

The switch to dense-phase powder transport has enabled Kysor//Warren to realize its other goal of more consistent film thickness. “The HDLV technology makes it easier to consistently get between 2 and 3 mils,” Goodson says.

It has also reduced powder usage by nearly 25%, an improvement Goodson attributes to the lower air pressures used in the HDLV system. “The part passes through the powder cloud and the electrostatic charge attracts the powder to the part,” he explains. “Before, powder would hit the part or blow by it.”

Reworking parts has also become easier, an important consideration when you’re building and shipping custom display systems to order. “If a panel on a refrigeration case gets scratched, it has to be repainted immediately to ensure customer shipments are not delayed,” Goodson says. “We can spray the part right in our ‘color change kitchen,’ then hang it in a gap on the line, which allows the part to be touched up and done in one-third of the time it would take if it had to run the entire line.”

In its first full year in operation, the enhanced powder line saved Kysor//Warren approximately $225,000, including the increased capacity through greater line density and 25% in powder savings. According to Goodson, the cost savings and improved throughput would not have been possible without HDLV technology. “We knew going in that our business was going to be growing over the next several years,” he says. “We knew that if we didn’t improve line density—get more parts on the line—we wouldn’t be able to meet our production goals.”

Goodson believes the new powder system, together with Kysor//Warren’s lean manufacturing process, gives the company a clear competitive advantage. “We now have one of the best lead times in the industry, as well as top-to-bottom quality from assembly to paint and everything in between.”

As for the paint line, the future look bright. “Where we used to have gaps in the conveyor line, we now have parts,” Goodson says. “We’ve already gone from producing and coating approximately 375 refrigeration display cases per week to 565 cases per week. The plan is to produce and paint 1,000 cases per week. By combining other lean manufacturing principles with the Prodigy system, we will have the capabilities to achieve that goal,” he concludes.

Dense-phase powder transport technology is not a new technology—it was developed and commercialized about three years ago. But the method of moving powder from a conventional fluidized hopper or locally fluidized vibratory box feeder to spray guns can provide multiple benefits, according to Nordson Corp.

The company trademarked the term “High Density, Low Velocity” to describe operation of its Prodigy line of application systems, which combine pumps and guns to facilitate “dense-phase” powder delivery. Nordson says dense-phase technology reduces the amount of conveyance air required, reducing overspray and other issues associated with excessive compressed air use in a conventional system.

In a gun pump application, conveyance air is also dramatically reduced, producing a very low-velocity, highly dense spray pattern from the gun, the company says. This results in faster application capability, more complete coating coverage, and higher transfer efficiency among other benefits. The system in use at Kysor//Warren also includes a quick-color-change manifold and control system said to provide automatic color changes in less than 20 seconds.

Nordson says its latest version of gun for the system, the Prodigy Generation II manual spray gun, is nearly 20% lighter than its predecessor. A new automatic gun is also said to provide more consistent, repeatable performance.