Long-shaped parts are cantilevered over the crest during processing. Machine vibration bounces the part against sharp media edges, which can be another source of part surface damage.

Ribbed liners are typically utilized in applications where flat parts are being processed or flat media must be used.

Media adhering to the inside wall of a vibratory bowl. 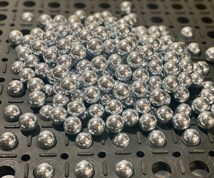 Because hardness values of elastomers, rubbers and plastics vary, indenter pins of varying widths and shapes are employed. For example, a sharp-pointed pin would be unsuitable for a gel-like substrate as it would penetrate, rather than deflect, its surface.

The unit of measure for the hardness reading is known as Shore Hardness, honoring inventor Albert Shore. The most commonly used Shore Hardness scales are: Shore 00 Scale for gels and elastomers; Shore A Scale for rubbers; and Shore D Scale for plastics.

At some time during ownership, the equipment will require a reline. This is expensive with a price tag of $3,000-10,000, depending upon the size and channel complexity. Additionally, relining is done off-site which entails shipping costs and production downtime. Therefore, it is beneficial to run the equipment in a practical fashion to complete the job at hand while understanding the consequential liner degradation that is occurring. Use of the least-abrasive media possible will extend liner life.

Ribbed liners are typically utilized in applications where flat parts are being processed or flat media must be used. With a flat liner wall, small flat-shaped parts or small, flat-shaped media will adhere to the outside diameter wall due to liquid surface tension. Adhering parts are removed from the refinement action during processing.

In applications where small flat parts (such as coin blanks) or where small, flat media is required, a ribbed wall liner will break the surface tension that is keeping the parts in the mass.

Heavy, highly polished 300 lbs/ft3 steel media is used in peen polish processing. During peen polishing, surface asperities aren’t cut away with an abrasive media, but are pounded flat and laminated onto the part’s surface. The final finish is cosmetically attractive and the soft alloys are more favorably peen polished.

Steel media presents a unique complication in the vibratory bowl. Table 1 shows that a 90 durometer Shore A hardness is typical for a supplied polyurethane liner. When this hard liner is matched to the polished steel media, the media can gain little traction — imagine a hockey puck on clean ice.

Therefore, vibe bowls intended for steel peen polishing are typically supplied with Shore A 60 durometer hardness rubber liners. The weight density of the media mass above the lowest layer of media in the vibe bowl channel will indent the softer durometer rubber liner to momentarily form a cup-like depression beneath the steel media. The momentary cup formation gives the steel media stable traction to initiate a vertical rolling motion.

Ramped-channel bowls greatly facilitate part unloading. Imagine one thread around the circumference of a bolt and you can envision this affect. Flat-channel bowls are more commonly hand or magnetically unloaded. A bowl ramp spirals around the hub to a crest where parts fall over the edge to the channel bottom. Parts at the ramp bottom then become impingement damage targets. Parts weighing one pound or more are impingement endangered in ramp-bottom bowl processing.

Falling Part Impingement Damage: Parts cresting the ramp and falling atop other parts is an invitation to part-on-part damage. Ramped bowls are a better consideration for hardened steel parts.

Changing Media Volume on the Ramp: Media not only refines the parts but it also keeps them separated during processing. As media depth decreases with ramp height, there is less mass present to keep parts separated and impingement can increase.

Cantilevering of Long Parts: Long-shaped parts cantilever over the crest during processing. Machine vibration bounces the part against sharp media edges, which is another source of part surface damage.

Separation Deck Damage: If the ramp empties onto a separation deck, then parts bouncing along the deck are subject to mechanical damage. This is a less attractive option for metallurgically soft parts manufactured in zinc, brass or copper.

In vibratory departments where numerous machines operate simultaneously, the noise level may need to be attenuated. This is accomplished using a sound cover lined with sound-absorbing foam. Sound covers come in two varieties — hard covers and soft covers.

Hard-Style Vibe Bowl Sound Cover: Hard-style vibe bowl sound covers are typically of a clam-shell design manufactured in steel or in lighter weight fiberglass. The cover is lined with sound-absorbing foam and is mounted on a pedestal from which it is raised or lowered into position by means of pneumatic pistons.

Soft-Style Vibe Bowl Sound Cover: Soft-vibe bowl sound covers (typically known as bonnets) are a circular-shaped tubular frame covered with a nylon shell and lined with sound-absorbing foam. The cover is suspended over the vibe bowl by an “L”-shaped flag pole and is raised or lowered by means of a clothesline. More economical in design and cost, the bonnet-style sound cover affords the same degree of sound protection at a more budget-favorable price point.

Heat Retention from Sound Covers: When sound covers are in use, it should be noted that they will retain frictional heat in the bowl. It may be desirable in such situations to increase the flow rate of the compound being pumped into the vibe bowl.