A centrifugal fan in a steel plant is often exposed to abrasive dust, which results in material loss and a shortage of running time for the fan.
#vacuum-vapor

Centrifugal fans in the steel industry are often exposed to rough and challenging conditions, such as vibrations, high temperatures and abrasive particles. While vibrations can mostly be avoided by balancing measures and temperature resistance achieved by the right choice of material and dimensioning of cooling discs, a resistance against abrasive particles is still a challenge for many centrifugal fans. The dust load in the air (as well as the size, speed or hardness of the particles) determines the running time of a centrifugal fan in a steel plant. That was the main incentive for TLT Turbo to invest great efforts to considerably increase the running time of centrifugal fans in dust-loaded conditions.

In 2014, a new materials laboratory was planned and has been successively extended. Next to high-precision devices for determining an exact weight loss, coating thickness, microscopic examination of surfaces and more, the particle jet test stand was also upgraded. TLT-Turbo is now able to perform particle jet wear experiments with original customer dust and different speeds of the blasting particles. Thanks to the results of over 650 particle jet wear experiments, TLT-Turbo has been able to gain an even deeper understanding of the influence factors and mechanisms of wear on centrifugal fans. Various approaches to master a combination of particle-induced wear and corrosion or wear during sintering can also be investigated on a scientific basis in the new materials laboratory. 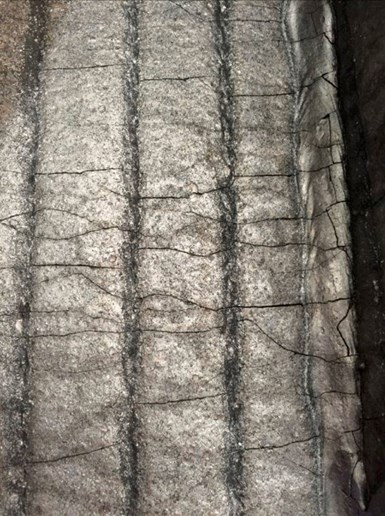 This figure shows an example of a typical surface of a welded coating.

In different applications in the steel industry, welded coatings on centrifugal fans have been used since the 1980s. So, in between hardfacing is a well-established and standardized process (robot-based, automatic coating of impeller blades) and the cost per square meter is comparatively cheap. Another advantage is that if wear-induced local damages occur in the coating, the customer can repair it directly at the affected area in the impeller. By increasing the number of welded layers on the most exposed areas, the running time can be further increased. The only obstacle is the accessibility of the area in the impeller when it is integrated in the customer plant.

On the other side, hardfacing also has some disadvantages. If applied on fine grained steel, the incoming heat into the base material will impair the mechanical properties of the material. On a rotating part, such as an impeller, exposed to high centrifugal forces and vibrations, TLT-Turbo is not willing to risk insufficient mechanical properties. Instead, TLT-Turbo welds in hardfaced plates of uncritical base material that get attached to the impeller of fine grain steel by plug welding or screwing (if replaceable wear protection is required). The necessity of the uncritical base material contributes to the impeller weight. That disadvantage is further increased if the weight of the hardfacing itself is taken into account. The hardfacing has a thickness of 3-4mm that adds to the thickness of blades, partially on the center disc or even on the cover discs. Because centrifugal fans operate below their first resonance frequency and the resonance frequency gets determined by the stiffness of the shaft and the impeller weight, additional weight of the impellers requires a higher stiffness of the shaft. This gets implemented by a higher shaft diameter and, by that, higher weight. Also, bigger bearings or heavier substructures might become necessary. So, additional weight on the impeller also causes considerable additional weight for the rest of the rotor and, consequently, additional costs. 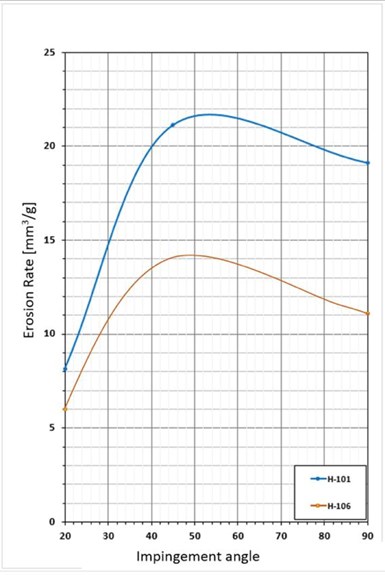 Another disadvantage of centrifugal fans with hardfacing is the rough surface. This coarseness causes aerodynamic disturbances and has a negative impact on the efficiency of centrifugal fans in steel industry. Furthermore, the risk of caking (adhesion of dust particles on the surface) on blades or hardfaced areas rises.

For a couple of years now, thin layer coatings have been a special focus of TLT-Turbo’s Anti-Wear research. Experiments on TLT-Turbo’s particle jet test stand showed that especially high velocity oxygen fuel (=HVOF) coatings proved to have superior erosion rates. This is a more costly, but high quality way of flame spraying. Especially in the steel industry, TLT-Turbo’s HVOF coatings (such as H-101) are increasingly established. Table 1 shows an example of the extension of operating time by usage of different HVOF coatings for a centrifugal fan in a European steel plant.

Table 1 shows an example of the extension of operating time by usage of different HVOF coatings for a centrifugal fan in a European steel plant.

Table 1 shows H-101’s erosion rate compared to typical welded coatings. However, further particle flow experiments with new chemical compositions revealed even better coatings. The most promising coating now is H-106. In addition to the improved erosion rate of H-106, it is also possible to achieve a higher thickness of up to 1mm. However, due to price pressure for centrifugal fans and a slightly reduced coating quality at high thicknesses, 1mm is only recommended on areas with extreme wear. A further advantage of the HVOF coatings is their smooth surface. In contrast to hardfacing, HVOF coatings have a hydraulic smooth surface for superior aerodynamic efficiency. Additionally, the lack of cracks and the low porosity of TLT-Turbo´s new HVOF coatings prevent local wear and chipping, and protect the underlying base material from corrosive undermining. 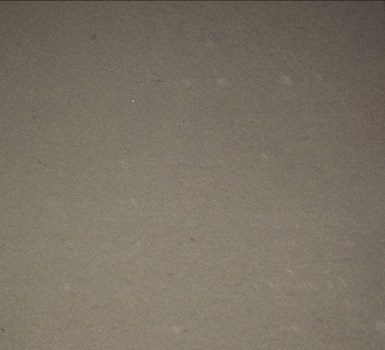 Close up view of HVOF surface.

However, HVOF coatings also have a few disadvantages. The main disadvantage is the price per square meter which is higher than a typical price of a common hardfacing in CAPEX-oriented markets that often prevent the choice of a HVOF coating. Another disadvantage of HVOF coatings is that their robustness (for example, against major mechanical impacts such as a blow of a hammer) can’t compete with hardfacing yet. That means it is advisable to handle a HVOF coating with more care than a welded coating or else you risk a crack in the coating which is a starting point for further chipping and exposes uncoated surfaces to abrasive dust.

Reasons for the crack might be a mechanical impact on the backside of the screw, a too strong tightening of the countersunk head screw or preloads caused during the welding-in of the screw into the plate. Also, a repair of a HVOF coating in the steel plant is expensive and difficult due to the installation situation. 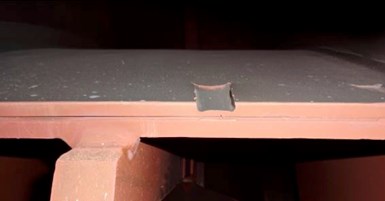 Finally, a direct coating of an impeller is often not possible due to the accessibility of the areas to be coated. The individual geometry of the impeller and the position or the definition of the coating areas determines that possibility. It it also possible to coat plates, such as radial blades or exposed areas on the center disc, before welding. However, the welding of the separate parts together after coating impairs the coating quality in the intersection areas between the blades and the center disc. 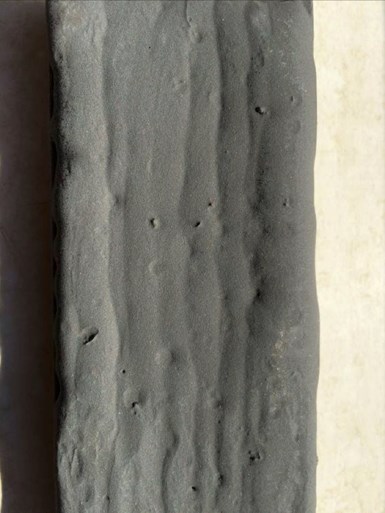 Because both approaches – Hardfacing and HVOF – have their justification and are established in steel industry, TLT-Turbo searched for ways to combine their advantages. In order to add HVOF coatings such as H-106 on a typical welded coating, some research was done. Finally, the efforts to merge these coatings together were successful. So TLT-Turbo is able to provide new wear protection possibilities for centrifugal fans in steel industry. The most reasonable approach for TLT-Turbo now is to offer a cost-efficient and robust hardfacing on the entire pressure side of blades and on the areas of center disc and cover disc that suffer most from wear. An evaluation of typical wear zones of centrifugal fans revealed that the wear is typically distributed unevenly on the blades of an impeller. Often, the leading edge and the outer area of a radial blade are the most exposed parts and have the highest material loss. On these comparatively small areas, therefore, an additional coating such as H-106 is applied. The thickness of that coating can also be adapted, depending on the wear pattern within the blade.  With that measure, a typical running time without wear-induced stops in the steel plant can be more than doubled compared to solely hardfaced impellers. 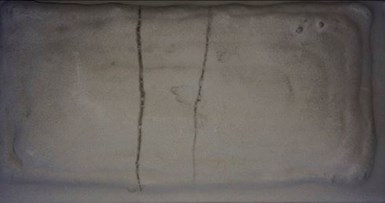 Cracks in a welded coating, partly filled with H-101.

A further advantage of the solution is the comparatively cheap price for the blade with only slightly higher costs than a pure welded coating. This, of course, presumes that the entire blade does not get the hybrid coating, but only those areas that are most prone for wear.

Also, the customer will benefit from the robustness of the wear protection in the impeller. Mechanical impacts on the surface of the hybrid coating would only have a small effect on the HVOF surface. If local chipping occurs, it will be limited until the next crack of the underlying welded coating. If small local damages emerge, they won’t leave the base material exposed. In the previous example with the solely HVOF coated blades, an underlying hardfacing would have absorbed the impact and no crack would have occurred.

In contrast to a pure HVOV coating, local damage to a hybrid coating can also easily be repaired in a steel plant. Measures to repair a hybrid coating would only be taken if the hardfacing had already been damaged or vanished. All that needs to be done when local damages occur is to weld a new layer of hardfacing over the affected area. This can be done on site and even by the customer.

Furthermore, at least at the hybrid coating areas, the surface is smooth and aerodynamically beneficial. Small cracks get filled by the overlaying HVOF coating and only big cracks might stay open.

Also, the additional weight caused by HVOF is quite limited due to the local hybrid areas and their thickness of mostly only 500µm. So the total weight roughly equals that of common wear-protected impellers. If, however, a pure HVOF coating will be replaced by a hybrid coating (for example, at exchangeable wear blades), the thickness of the base material of the wear blade needs to be reduced to compensate for the additional weight by the welding.

A centrifugal fan in a steel plant is often exposed to abrasive dust that results in material loss and a shortage of fan running time. With TLT-Turbo’s new approach of hybrid coatings, even the most challenging customer requirements can be met. With the inclusion of H-106, an increased running time is now possible for the most wear-exposed surfaces at the impeller.

A superior robustness, which is often demanded by a steel plant, is possible as well as the customer’s option to repair damages on site. The cost for the new hybrid coating are also only slightly higher than those of a common hardfacing.