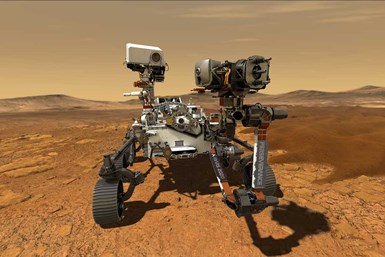 Curtiss-Wright’s Surface Technologies Division (Parsippany, N.J.), a global provider of highly engineered surface treatments and analytical services, has announced that its proprietary Microseal impingement lubricant coating process has been used on numerous components for NASA’s Mars 2020 Mission, many within the Sample Caching System on the Perseverance Rover.

According to Curtiss-Wright, the Microseal process results in an ultra-thin self-limiting and firmly adherent solid film that only fills voids on the surface. The film is designed to perform in hard vacuums and in extreme temperatures ranging from -423˚F to 2000˚F (-253˚C to 1093˚C). Static, sliding and rolling load-bearing modes are all compatible with the process and application will not affect the base material’s hardness, temper, flexibility or other properties.

The company says the process creates a continuous lubricating surface that reduces friction and prevents galling and seizing. It also dissipates heat, remains stable under extreme environmental conditions, and does not attract contaminant particles. The process can be adapted to a wide variety of substrates.

NASA’s Mars 2020 Mission is scheduled to launch on July 30, 2020 from Cape Canaveral Air Force Station, Florida. Perservance’s mission is to seek signs of past microbial life and collect rock and soil samples for potential return to Earth.