When using three-component paints, a proportioning system comes in quite handy. Ramsey Winch has found one that has made its operation more efficient and cost effective... 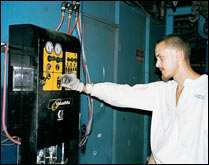 Painters use HVLP spray guns to apply a two-component urethane. The paint is supplied from two Graco ValueMix sprayers.

Painters use HVLP spray guns to apply a two-component urethane. The paint is supplied from two Graco ValueMix sprayers.

Ramsey Winch Co. (Tulsa, OK) manufactures pull winches for industrial and commercial applications. Before a plant-wide drive to improve efficiency was initiated last year, it was spraying an automotive paint on the winches to protect them from rust and corrosion. The paint was a three-component coating and required a proportioning system to meter and mix the material.

According to Vic Stephens, quality engineer, there were a number of problems with the material and the system. “The material was a very slow curing paint. If the humidity in the plant was high, as it often is during the summer, the parts could still be tacky when they were unloaded from the overhead conveyor. The assemblers and packers had to be extremely careful because the parts were susceptible to scratches and fingerprints. This would result in rework. On extremely hot, humid days, rework could reach 50%. If they waited for the parts to dry properly, it created a bottleneck. Both of these situations were unacceptable.”

Also, the automotive paint was costly. “We realized that while we wanted a high quality finish, we could retain finish quality, reduce cure time and improve the protective qualities of the coating with a less expensive, more durable material.”

Finally, maintenance on the proportioning system was extremely high. It was costing us thousands of dollars in repair parts to rebuild the system every time we had problems. It was a complicated, time-consuming, labor-intensive chore and, quite frankly, overwhelming,” he said.

In an effort to improve production in the finishing area, Ramsey authorized a team of employees selected from the affected work areas to find a solution. Their first task was to tackle the paint problem. After discussing options with material suppliers, the team recommended a high-solids two-component urethane with a cure time of less than 45 minutes. They selected colors that matched American MIL-STD-595B and European RAL standards and reduced the number of standard colors from six to two.

Next, the team tackled the proportioning and delivery system. On a recommendation from the company’s equipment supplier, the team tested Graco Inc.-Industrial Products Division’s ValueMixTM proportioning system. The system is a simple-to-use sprayer designed to meter and mix two- and three-component paints accurately and reliably. Ideal applications for ValueMix include a 5-25 gpd user, spraying HVLP or air spray, using plural component paints up to an 8:1 ratio with viscosities less than 500 cps. These features met Ramsey’s requirements exactly.

“We were impressed with the system,” stated Mr. Stephens. “It proportioned and sprayed the high-solids urethane without a hitch, and it took less than 30 minutes to train our painters to use it. After two days we took it out of our test lab and installed it on the finishing line. It’s been running full production days since that time.”

Within 30 days, another ValueMix system was installed in a second spray booth, completing the production team’s efforts to eliminate the bottleneck on the finishing line and increase efficiencies. “We’ve received significant benefits from the sprayers,” said Mr. Stephens. “In fact, ROI on the two sprayers was less than six weeks.”

According to Mr. Stephens, the sprayers are an integral part of the finishing operation. The metal housings and parts to be painted are loaded onto an overhead chain conveyor. They travel through a three-stage washer and into two back-to-back dry filter spray booths. The units supply correctly proportioned paint to painters in both booths using DeltaTM HVLP spray guns. The painters strive for a 2.5-mil dry film thickness. Color changes are easy to make and take less than five minutes. From the spray booths, the winches travel through another oven and are unloaded further down the line.

“When the parts arrive at the unloading station, the paint is cured now,” explained Mr. Stephens. “The new paint and proportioning system has put an end to our major bottleneck. We’re all proud of the production team’s efforts to eliminate the problem.”

Since the changes were made almost a year ago, maintenance on the two sprayers has been minimal. “It’s a clean system and easy to maintain,” said Roy Floyd, maintenance. “I can tear down the pump and have it operating in a half-hour. The old proportioning system took half a day, and we would have to shut down production while the pump was being repaired.

“It’s a very simple system to operate and maintain,” stated Mr. Stephens. “We’re very satisfied with the material and equipment changes. We’ve eliminated a potential production bottleneck and virtually eliminated rework attributed to our finishing application. All of these have made us more efficient while maintaining our quality.”