The new barrel plating line at Chilo allowed the company to increase production dramatically while decreasing water use and sludge generation . . .

Chilo Manufacturing and Plating, (Chicago, IL) manufactures steel lighting components—tons of them, including wire parts, ferrules, clamps and wire stampings. In 1997, the company brass plated 890 tons of work in 2,258 production hours. However, in 1999, the company brass plated 1,596 tons of fittings in 2,077 production hours. This is a 79% increase in work plated and a significant reduction in man-hours. Expressed in tons/hr, productivity improved from 0.39 to 0.77 tons/hr. 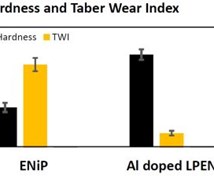 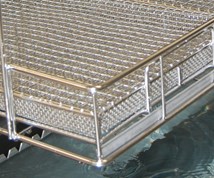 During the first 4 months of operation, the old and new lines ran in parallel. The new line ran 30% faster, averaging 10.7 loads per hour compared to 8.2 loads on the older line.

The system was designed to be brought on line and debugged in a couple of months. However, Chilo could not seem to overcome its "pink brass" plating problem. The problem was with the bath chemistry.

New chemistry was developed to work with the new equipment to increase production. Within 3 months, Hardwood had re-timed the plating line hoist to permit adequate barrel drainage, allowing the line to run in full automatic mode.

CBP Inc. developed and installed the line's chemical system. The new electrocleaner EC107P and acid salts AS216P were compatible with the balanced brass plating bath so that the bath was not affected by dragin. The cleaner surfactant package acts as a brightener in the brass plating bath. The acid activator is also compatible with the bath. Using these non-chelated, non-emulsifying chemistries, supplied by RIN, Chilo was able to eliminate the need for a soak cleaner. Instead, it employs an electrosoak cleaner with an oil skimmer attached to remove floating oil.

The cyanide brass bath is maintained at a ratio of 2:1:2 copper to zinc to free cyanide, and the pH is maintained around 10. Monoethanolamine is used instead of a less stable ammonia. Carbonates are held below 10 ppg.

One RinseMaster water miser system is engaged after the cleaning process. A second system is employed after the acid activator, and the third is stationed after the second rinse after brass plating. The RinseMaster is a seven-station counterflow rinsing system. Simultaneously, spray rinses strategically located around the perimeter of the tank rinse the exterior surfaces of the plating barrel. The rinsing sequence recycles the rinse water, whereby the first stream is released to the wastewater stream and the second stream replenishes the first canister, the third stream replenished the second and so on.

This particular rinse system also allowed Chilo to trap dragged out chemicals and recycle them to process tanks. Chemical and metal consumption rates were cut by 50%.

CBP studied the plating line to determine standard daily additions based upon statistical consumption rates. Bath samples are submitted weekly to the chemical company for analysis. Depending on the results of the analyses, supplemental additions may be prescribed.

After plating, all work is burnished/polished to produce a bright, smooth gold luster. Burnishing is a form of micropolishing using a soapy solution with steel shot. Chilo also replaced the chelated chemicals used on its polishing/burnishing line with BP167P. This shortened the polishing cycle and cut water demand from 2,656 gal per ton of work to 1,250, down 53%. Also, because the chelators were replaced, sludge generated from treated effluent dropped from 5 cu yd/month to less than 1 cu yd/month.

Hardwood Line and CBP refined Chilo's pollution control system, developing simple operating procedures for each step of every process. Chilo's personnel are periodically audited to verify proper maintenance and operation of the entire system. Chilo is now in full compliance with all sewer discharge limits. And its product yield continues to rise while operating costs continue to decline. Now you know why production increased while costs decreased.