La Shirl Turner, head of the Stellantis North America Advance Color and Materials Department, talks about how she got there and what they do in one of the auto industry’s most imaginative creator of colors.
#automotive

In 2020, what was then still-FCA North America (now Stellantis) sold 795,313 Jeeps, 624,642 Ram trucks, 110,464 Chryslers and 267,328 Dodges. And every single one of those vehicles is painted with a color that may be considered “core” — like a white, black or silver — or, more likely than is the case at any other automotive OEM, an “impact color,” whether it is a Chrysler 300 in Canyon Sunset, a Wrangler in Hella Yella, a Ram TRX in Ignition Blue, or a Charger or Challenger in Sinamon Stick.

And those colors come out of the Stellantis Advance Color and Materials Department in Auburn Hills, MI, which is headed by La Shirl Turner.

Turner, who grew up in Detroit, attended the College for Creative Studies (CCS), where she pursued studies in fashion and textiles. She’d learned to weave when still in elementary school, and that set a direction for her. “I thought I was going to be a starving artist,” she admits. “I’d be weaving textiles and making wall hangings.”

But then there is the Detroit influence. “I also had a passion for cars.”

From school to the studio

Car seats interested Turner, so she took a summer class learning how to draw them, which also led to classes in exterior and interior design.

As CCS is one of the preeminent automotive design schools on the planet, it isn’t entirely surprising that Turner got an internship with a textile supplier that worked with OEMs. She was assigned to work with FCA, where she interacted with the people in the vehicle manufacturer’s Advance Color and Materials Department.

The function of that department, Turner explains, is to deal with everything from exterior colors to the headliners in vehicles.

Upon graduation, she went to work for the supplier. “It was one of the best experiences ever,” she recalls, “because I learned how textiles work in automotive and I even got to see how the machines work in the company’s plant.”

But then one day she got a phone call from the head of FCA Advance Color and Materials, who asked if she’d be interested in an interview. She, of course, got the job.

She started out as a designer. One of her first assignments was on the Dodge Viper. She worked her way up to senior designer, manager, senior manager, to director of the department. 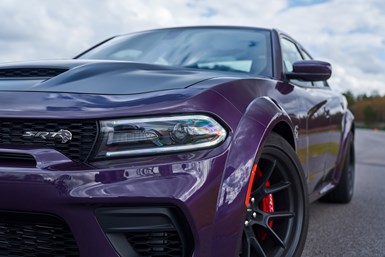 2021 Dodge Charger SRT Hellcat Redeye in Hellraisin with a Satin Black hood, roof and decklid. Given that it has a 797-hp engine, making it the fastest mass-produced sedan in the world, makes the paint name appropriate.

So where do the colors come from?

There aren’t many OEMs who are putting colors like Snazzberry and Nacho on offer. Yet this is part and parcel of what can be expected to come out of the Auburn Hills studio.

Turner acknowledges that they offer the “classic core colors,” which they work to individualize, but they also work to offer “impact colors that are fresh and new — that you don’t see anywhere else.”

“I hope we’re the trendsetters compared to our competitors,” she says. “Of course, they might say the same thing. But it is always our job or our goal to push the envelope with exterior colors and interior materials.”

There are a number of inputs that go into color development. They attend the yearly color trend shows that are organized by PPG and Axalta. (The most recent, virtually, of course.) The team members do their own research. The paint supplier may have a color of interest. The Stellantis team is likely to “tweak it for a vehicle line we want to place it on.”

She says that customer input — especially for the enthusiast vehicles, which the company has more than its fair share of (e.g., Wranglers and Rams, Chargers and Challengers) — is very important.

For example, there is an annual event held in southern California, Spring Festival of Lx, which is restricted to owners of 300s, Chargers, Challengers and Magnums. They’ll let owners of SRT8 variants of the Jeep Grand Cherokee and Dodge Durango in. These are people with a deep commitment to muscle.

Turner says that a couple of years ago (good timing, as the 2020 event was postponed) the Advance Color and Materials team had 10 colors they were thinking about using. So they painted speedforms — a 3D rendering of the shape of a body (what Turner is looking at in the accompanying photo) — and created a ballot. They setup a tent at the event and had some 1,200 people pass through and vote. “What better way to hear the voice of the customer?”

Colors including Frostbite and Hellraisin came out of that exercise.

Of course, the company’s leadership team as well as the brand and program teams are also involved in making decisions about what colors will become part of the pallet for a particular brand. 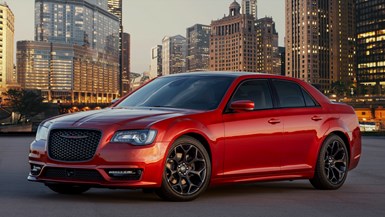 2021 Chrysler 300 in Canyon Sunset. A more sedate—yet surprising—color for the executive sedan.

Of course, the factory

“Would we love to run 30 colors at one plant?” Turner asks. “Of course we would. Can we do that? Absolutely not.”

Yes, there are also the practical considerations of production.

Because the plants are constrained in terms of the number of colors they can run, she says “We’re very strategic in our color placement.”

That said, there are still vehicle characteristics that are taken into account. For example, at the Brampton Assembly Plant, the Chrysler 300, Dodge Charger and Dodge Challenger are produced. While all three vehicles are offered in Frostbite, only the Challenger and Charger are available in White Knuckle (as well as TorRed, Smoke Show, Go Mango and others that look appropriate on muscle cars, not stately sedans). 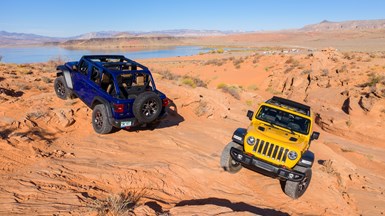 A pair of Jeep Wranglers — Hydro Blue and Hella Yella — in their natural environment.

And about those names

Turner says that coming up with names of the colors “may be the most fun part of our job.” The Advance Color and Materials studio members come up with ideas, as do the people in the vehicle design studios, as well as the people on the brand.

After all, while a Sarge Green — in both name and hue — may be appropriate for a Wrangler, somehow it wouldn’t resonate so well on a Chrysler Pacifica minivan (and Ocean Blue Metallic going in the other direction).

Vehicles have their own colors, Turner says. “We wouldn’t put Mojito” — a recent Wrangler color — “on a Ram truck.”