A MicroCare (New Britain, Conn.) industrial fabrication customer needed a solution to remove a variety of synthetic greases from gears and bearings. The company’s technicians were originally cleaning parts by hand by soaking and scrubbing in flammable, hydrocarbon solvents for several hours. The company worked with Emerson (Danbury, Conn.) to select a vapor degreaser and a cleaning fluid to upgrade from a manual to a more automated cleaning process. After initial vapor degreaser testing using the customer’s contaminated parts, Emerson recommended their Branson B950R vapor. After one week of using the new system and various degreasing fluids, the engineers noticed that the cleaning was not complete. The specialty degreasing fluid removed the petroleum components of the synthetic greases but left a thick, heavy, white residue behind. 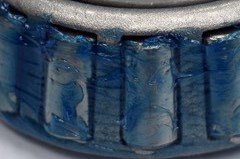 Emerson reached out to MicroCare to conduct a cleaning evaluation in their Critical Cleaning Lab to solve the problem. Engineers brought new samples of bearings coated with the synthetic greases for a full cleaning evaluation. The MicroCare Critical Cleaning Lab chemists conducted an initial cleaning trial using the same methods and fluids as the customer.  The results were the same as those the customer found; a coating of thick, white residue remained on the parts after cleaning.

Initially referred to by a prototype number, this new cleaning formulation soon became known as MicroCare Synthetic Grease Remover. This custom cleaning fluid met the synthetic grease cleaning challenge by breaking the grease down into its parts: the solvating agent cut through the organic components while the other ingredients lifted the inorganics and salts.  All of the customers’ parts were then returned to the customer for evaluation. Satisfied with the results, the customer has selected MicroCare Synthetic Grease Remover as the solvent for their vapor degreasing system.

All parts were visually evaluated before and after cleaning.

The amount of mass removed during cleaning is measured by weight.

The MicroCare Synthetic Grease Remover solubilized all of the grease and left minimal white residue behind which meets the customer’s cleanliness specifications. The grease remover holds at least 9.3% wt./wt. of grease in solution while remaining a homogenous solution. All of the test parts were cleaned in under an hour with minimal residue. A minimum of 20 minutes was suggested for boil immersion in order to remove the contamination. Longer boil times may be required for larger parts or heavier grease contamination. A rinse time of 5-10 minutes was suggested for any size part. Vertical agitation of the parts will also help break up any grease trapped in tight or interior areas of the parts and help promote thorough cleaning.

While the customer’s primary motivation in this study was to ensure parts cleanliness and to limit any residue that might impact further coating or finishing,  the selection of MicroCare Synthetic Grease Remover has led to additional benefits.

The other new process improvements include:

Through rigorous testing and focusing on the chemistry, the custom-formulated MicroCare Synthetic Grease Remover successfully cleaned the greases without any detrimental impact to the parts material or subsequent finishing processes. By matching the chemistry of the cleaning fluid to the parts substrate and the unique grease to be removed, the MicroCare Critical Cleaning Lab found a customized, yet simple and fast cleaning solution for its customer.