In the harsh sun and salt environment of South Florida, aluminum reigns supreme for its ability to resist rust when it comes to metal building materials. And in the South Florida coatings market, PTF Industrial Coatings near Miami is a pioneer with its ability to mask, liquid paint, powder coat and sublimate any architectural and commercial project. Jerry Cabrera bought PTF in 1998 and quickly changed its focus to enter a new, more promising market — aluminum extrusions for the architectural market.

Founded in 1992, PTF Industrial Coatings had been mostly catering to OEMs by powder coating sheet metal parts. Entrepreneur Jerry Cabrera bought the company in 1998 when it had a handful of employees. He quickly changed PTF’s focus to enter a new, more promising market — aluminum extrusions for the architectural market (primarily used in windows, doors, railings and building curtain walls). Cabrera moved PTF to a larger 55,000-square-foot building to enable expanded operations, even creating an area for a unique eight-stage, fully automated pretreatment process. He invested heavily in PTF’s equipment to be able to powder coat long aluminum extrusions and hasn’t stopped investing in the company since then. 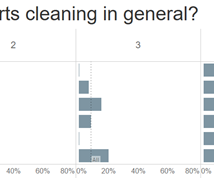 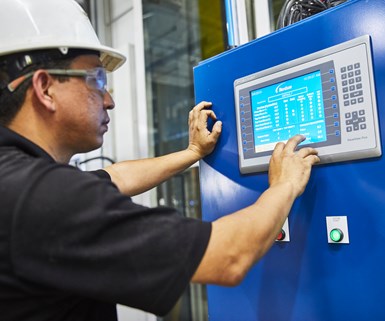 PTF can program all colors in the Nordson system, with the operator able to select a different color from one bar to the next, changing colors in as fast as 20 seconds, which decreases line gaps.

Recently, Cabrera recognized a new opportunity to continue growing his business. “The biggest need in South Florida is for liquid PVDF architectural coatings for their high-performance durability for metal building materials, especially to get into really large jobs such as high-rise buildings or stadiums,” Cabrera says. “There were only a few coaters in Florida with that capability and none as far south as Miami, which meant most materials were being trucked north to be coated.”

In the South Florida market, architects on large jobs often require finishes to meet AAMA 2605 performance, the most stringent requirement for extrusion coating performance in the region. 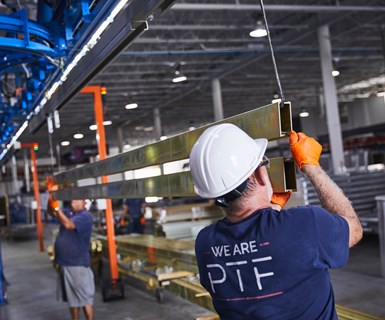 The biggest need in South Florida is for liquid PVDF architectural coatings for their high-performance durability for metal building materials.

“Powder has made great strides in color retention and durability, but here in South Florida, liquid is a must. We couldn’t serve our customers [requiring AAMA 2605] and continue to grow our business without liquid capabilities,” Cabrera says.

Cabrera knew it was time to invest in a liquid coating line. Despite the enormous opportunity this new capability offered, installing a liquid line proved to be a major challenge for several years and for several reasons, ranging from difficulty obtaining permits and the expense of adding the line to a lack of floor space.

“The size of our facility was one of the main roadblocks. It usually requires around 100,000 square feet to install an effective liquid line and we just didn’t have that kind of room,” explains Cabrera. 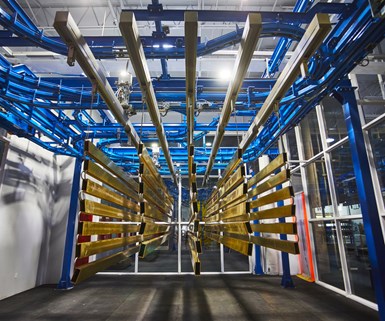 Cabrera was familiar with Nordson Industrial Coating Systems, so he decided to reach out. PTF made two visits to Nordson’s Ohio facilities to coat a customer’s extrusions, meeting the customer’s specifications.

Through the validation process, PTF gained confidence with the RA-20 rotary atomizer. The RA-20 delivers painting efficiency, superior finishing quality and operating safety for a wide range of finishing applications. When the team added a fan pattern control kit to the RA-20, Nordson and PTF realized they could better penetrate recessed areas and use less equipment. This meant a lower capital investment, as well as reduced long-term operating costs.

A Hybrid Coating Line That Meets Every Need

After nearly two years of planning, designing and installing the new line, PTF began full liquid coating production. Because powder coating is still an important part of PTF’s business, the new line had to accommodate both liquid and powder. The hybrid line has one powder booth and three liquid booths – one each for primer, base coat and clearcoat ­– taking advantage of an innovative conveyor solution from SEF Italia Power and Free Conveyor. In just one pass through the line, primer, base coat and clearcoat (if needed) can be applied, cutting the time in half for jobs that require a clearcoat.

PTF uses eight RA-20 rotary atomizers between its three booths, with four in the topcoat booth that have instant four-color change capability. The RA-20 rotary atomizers have no minimum sparking distance, so they can be positioned close to parts for optimal coverage and minimal overspray, plus precise film-build control through atomization.

The conveyor system and the Nordson systems interact seamlessly, using a customized control package and Nordson pumps. This allows PTF to program all colors in the Nordson system, with the operator able to select a different color from one bar to the next, changing colors in as fast as 20 seconds, which decreases line gaps. 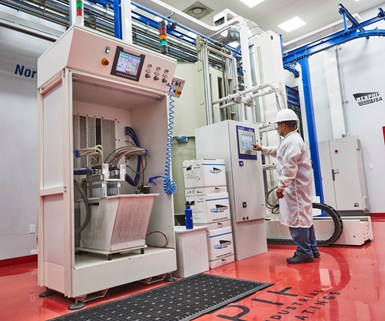 With the hybrid line, PTF can easily run jobs that are liquid, powder or sublimation while also running a variety of colors.

For powder coating, the line includes an environmental room with a quick color change powder booth and a Nordson iControl 2 Integrated Control System with Encore powder coating guns. PTF can now run liquid coatings on the line for several hours and then, within a matter of minutes, switch to powder coating.

“Our hybrid line fits into about 20,000 square feet. We can apply three coats of liquid paint or powder on the same line. There is nothing like it in the entire country, as far as we know,” says Cabrera.

Jim Akins, Nordson’s North American liquid sales manager, was impressed by the knowledge Cabrera brought to the process. “It’s unique to have an owner so intricately involved and be able to offer so much valuable input,” Akins says. “It was a collaborative effort all around to develop a solution for such a small footprint, including between all vendors to ensure all systems would work together.”

The risk of installing the new hybrid line and the associated investment that came with it has never been lost on Cabrera. “This is not just equipment. It is realizing our dream to take a big step, grow the company, and establish our position as a technical market leader,” Cabrera says. “Nordson understood we were a small company with limited space and resources putting everything on the line. They were willing to bend over backward to work with us to test all of the different business parameters and equipment to ensure when we turned the key on day one, the system would work as planned.”

It took about 18 months to design and install the new conveyor system and all equipment on the line. It has taken much less time than that to start paying off the investment. PTF planned to get the liquid line up and running in the first few months before taking on jobs. Because of demand in the area, the liquid line was put into action almost immediately. 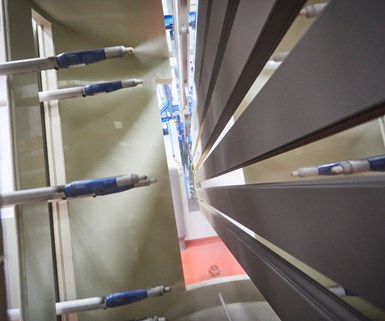 PTF uses eight RA-20 rotary atomizers between its three booths, with four in the topcoat booth that have instant four-color change capability.

Already, PTF has liquid coated aluminum extrusions for several high-profile projects, including the Hard Rock Stadium (home of the NFL’s Miami Dolphins) and the guitar-shaped Hard Rock Hotel in Hollywood, Florida. PTF’s liquid business has been growing 20% each month in the five months since the line went live. Thanks to decades of exceeding customers’ needs, the new capabilities and a results-driven management team, Cabrera expects sales for the entire company to more than double in 2020. The PTF team has grown to nearly 50 employees and has room to grow.

While the larger, high-profile jobs grab more attention, PTF Coatings is still a job shop that coats many types of products for a variety of customers, which means flexibility is critical. With the hybrid line, PTF can easily run jobs that are liquid, powder or sublimation while also running a variety of colors.

“Flexibility and speed are built into the line. We don’t have to group jobs by color as a job shop normally has to do. We can run many colors and get them out quickly, back-to-back. As a job shop not knowing what’s coming, that’s essential,” Cabrera says. “Within the same overhead and same cost structure, we are growing very fast with 2019 set to be the highest grossing year in PTF’s history.”