Pryority Powder Coating finds a home in a vacant Piggly Wiggly store in the middle of a  shopping strip.

There is more than one way to solve a coating problem. Sometimes you just have to go shopping for the solution. 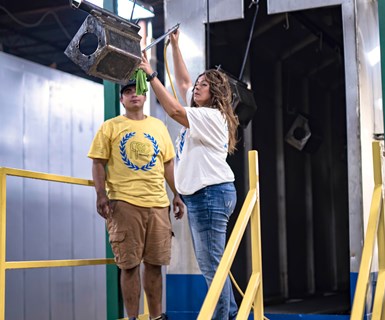 That was the case when Covered Wagon Trailers in Fitzgerald, Georgia, wanted to explore adding a liquid coating line to its manufacturing capabilities at its facility manufacturing trailers for all types of industry, including hauling and food service trucks.

Col-Met and one of its distributors, M&K International, visited the Covered Wagon facility in 2017 to talk to the company about adding a coating line to finish the sheet metal panels that make up the trailer sidewalls. At the time, Covered Wagon was building the trailer frame, outsourcing the panel coating and then bringing those panels back into the facility for installation. It was an inefficient process that Covered Wagon wanted to eliminate.

Covered Wagon Trailers in Fitzgerald, Georgia, manufactures trailers for all types of industry, including hauling and food service trucks.

Once the team assembled by M&K visited the shop, the discussion quickly turned to the possibility of adding a powder coating line instead of a liquid line, which took the conversation in a different direction. At first, Covered Wagon didn’t think a powder line would be feasible, given the limited space it had at its facility. However, a few weeks later, the company had a change of heart and asked M&K and Col-Met to offer a solution. 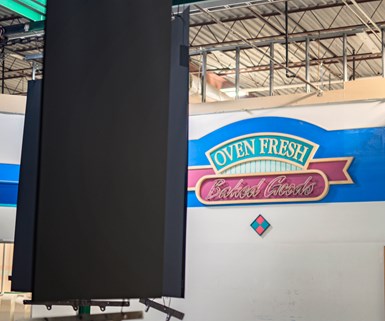 Covered Wagon explored the idea of starting a separate business in the former Piggly Wiggly, a standalone powder coating shop that could do Covered Wagon’s metal panels.

That’s when the team took a drive around the Covered Wagon factory and found the perfect location for its new powder coating line — a vacant Piggly Wiggly store in the middle of a nearby shopping center.

“They looked at us a little sideways when we suggested the old grocery store,” says Gerald Ellison, of M&K. “But  with the assistance of Col-Met, we drew up seven or eight different floor plans and showed them that the facility would work for them.”

The proposed system had more capacity than Covered Wagon’s current production demands required. Covered Wagon explored the idea of starting a separate business in the former Piggly Wiggly, a standalone powder coating shop that could do Covered Wagon’s metal panels, as well as contract work from around the Fitzgerald area. 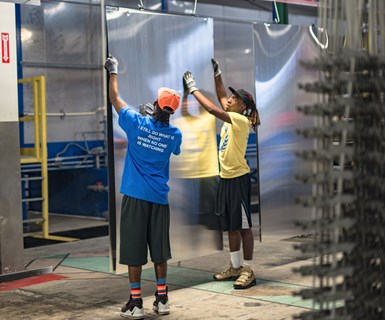 Workers hang sheet metal panels that make up trailer sidewalls on the finishing line to be cleaned and pretreated.

“We believed the facility could serve several purposes, including taking care of their coating needs,” Ellison says. “But, more importantly, it could serve as a profit center for the company, too. There was definitely a need for a powder coating facility like this in the area.”

Covered Wagon owners were convinced, and purchased the 35,000-square-foot property. They immediately sought someone to run the facility, which included overseeing the remodeling, construction and installation of the facility and equipment.

They found her about three hours up the road when they hired Angela Everett, a seasoned veteran who spent the last 10 years running an in-house Caterpillar liquid and powder coating line. Everett was running a similar type of system — in-house work coupled with coating parts from outside companies — in Griffen, Georgia, when Covered Wagon came calling.

Everett had to take a 1,000-foot monorail system that can hold pieces up to 30 feet in length, and snake it around columns holding up the ceiling in order to get the line in the building.

“They made a significant investment on a new line and oven, and needed someone to run it, and that was what excited me,” she says. “I wasn’t looking for a job, but when they called I just knew this is what I wanted to do. Starting the entire operation from the ground up was pretty cool.”

Covered Wagon incorporated the new facility as a separate business unit and called it Pryority Powder Coating, named after owner Gerald Pryor. In addition to Col-Met’s ovens, washers and environmental room, M&K worked with Wagner on the automated coating system, as well as getting the demolition completed and the facility up to specification.

That was easier said than done, says Chet Sweatman, Col-Met’s regional sales manager, because an old Piggly Wiggly wasn’t lending itself to easily setting up as a powder coating facility, especially with lower-than-normal ceilings for such an operation, and an abundance of columns and pillars throughout the complex.

“It was a challenge, given the footprint,” he says. “But we knew it just needed to be configured right.”

On top of getting the line installed, Everett was also tasked with hiring a crew to run the operation. That process began in May 2018 when she moved to Fitzgerald and it has been an ongoing process, which has been made even more difficult by the low unemployment rate in the community.

She first hired two employees to help her with the demolition of the existing interior. Because the facility changed from a retail zoning to an industrial one, more fire code rules had to be followed and new walls constructed according to additional building code guidelines. It also included digging pits for the prewash, cyclone and collector in the powder system.

The biggest headache was fitting the system around the many pillars and columns. 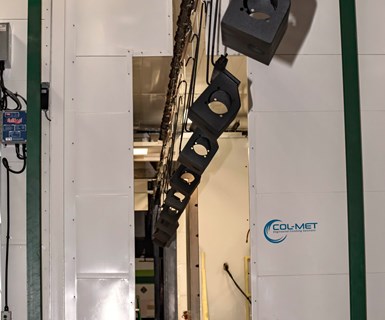 “We have to take a 1,000-foot monorail system that can hold pieces up to 30 feet in length and snake it around these columns holding up the ceiling,” Everett says. “That can be a bit of a problem sometimes and we had to move some things an inch left or three-quarters right. But we made it fit.”

Col-Met manufactured a stainless-steel parts washer, dry-off oven, environmental room and cure oven for the Pryority project, while M&K coordinated with additional suppliers to provide powder coating equipment in addition to installation and startup support. The installation of the new powder coating system was conducted by Shawn Ellis’s team from Paint Booth Installers.

John Owed, director of sales and marketing at Col-Met, said the company’s stainless-steel washer systems were designed in conjunction with various chemical suppliers to assure they meet the supplier’s standards.

“They have also been designed around minimizing maintenance and increasing machine life,” Owed says.

A sloped roof design allows condensed water to run down the side walls and away from any parts, Sweatman says, and a four-stage washer with one heated stage was provided for this project. The washer has a length of 154 feet.

“For added strength, the design was structural steel reinforced with angle stiffeners in tank walls,” he says. “We also added a continuous pitched grill under washer tank.”

Calvary Industries supplies the pretreatment chemicals, and Pryority is using its Cal Clean 11307 alkaline cleaner and its Advantech P610A for the pretreatment. Chris Berger, Calvary’s vice president and director of product development, says this process is set up for all metals and is entirely phosphate free. It is also approved to military TT-C-490F and Caterpillar 1E4093A, and can be certified to AAMA 2604/2605.

Everett fell in love with the pretreatment system when she saw it.

“The one thing I know is that it doesn’t matter what coating you are using, liquid or powder, it all starts off with a good pretreatment system,” she says. “That was something we took a lot of time to make sure we had designed right and that we had the right chemistries to give us good adhesion. The quality starts and stops right at the pretreatment system.”

Col-Met provided a pass-through, dry-off oven and cure oven for the project. Both ovens were constructed with 6-inch insulated panels, and were designed with ceiling-mounted plenums and air seals at the entrance and exit to contain the heat. The dry-off oven is 40 feet and the cure oven is 130 feet long.

“At the designed system conveyor speed, this allots five minutes for dry off and 20 minutes for cure,” Sweatman says.

Both ovens also feature the Col-Met Smart Touch control system which provides a touchscreen interface for the operators. Owed says the control system offers intuitive, menu-driven control systems that allow parameters to be stored and recalled in recipes. It also has on-screen trouble shooting and diagnostics capabilities.

To ensure a consistent and repeatable powder application process for Pryority, Col-Met designed a custom-fabricated, 28-foot wide by 50-foot long by 14-foot tall environmental room. The room was sized in conjunction with the powder equipment supplier and was constructed using 2-inch thick, double-skin insulated, powder-coated white panels. The room also included a space-saving rollup door, with patented sealing technology by RollSeal. The HVAC or air makeup unit for the room was provided by a local supplier.

Everett is more than pleased with the Wagner system, which is a quick color change system that, at first, they were concerned it would work like advertised, meaning there may be color contamination between changes.

“It’s perfect,” she says. “We’ve been changing colors numerous times a day for the last three months and there hasn’t even been a speck of the previous color in the system. Black to white, red to yellow. It’s truly remarkable and it’s a 10-minute color change.”

Everett first hired two employees to help her with the demolition of the existing interior. Because the facility changed from a retail zoning to an industrial one, more fire code rules had to be followed and new walls constructed according to additional building code guidelines. It also included digging pits for the prewash, cyclone and collector in the powder system.

Covered Wagon is still coating the trailer frame at its factory with a liquid coating, but Everett says the plan is to eventually move that coating operation to Pryority Powder Coating.

“We are truly revolutionizing this industry,” Everett says. “Before, everything came in from China. Now we are making it right here in the U.S. and coating it. There’s about 30 other manufacturers like this around us, and I think you’ll start to see them doing the same thing or we’ll do it for them. But it has changed everything for our industry.”