Metal finisher worked with several architects and consultants in designing new facility, and then called in CJI Process Systems to design, fabricate and install the anodizing lines and equipment.

What started out as a disaster for Geoff Folkes has turned into a true love story, both personally and professionally. 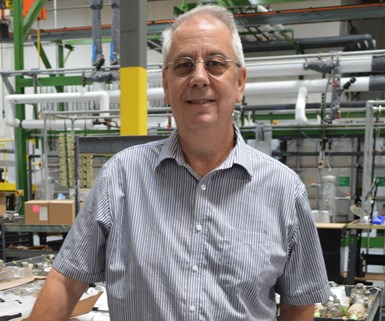 Geoff Folkes, executive vice president at Nasmyth TMF, had to deal with a multitude of regulators in order to get the company’s new facility up and running after the 2015 fire.

The executive vice president at Nasmyth TMF in Valencia, California, is a tried and true Brit, having grown up in the Shortlands area of Bromley in London, and graduating from Brunel University in Middlesex.

Folkes’ route to the U.S. and to Nasmyth TMF was circuitous. After a 40-year career in engineering and industrial management in London, he was the go-to guy when parent company Nasmyth needed someone to put out a fire at its California facility — or rather clean up after an actual fire when its Burbank plant burned to the ground in 2015.

“I flew over on three days’ notice to start sorting things out,” Folkes says. “Not the ideal way to start off.” 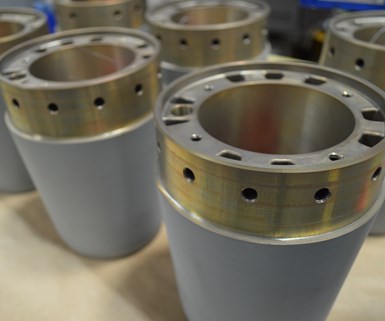 Nasmyth Group is a worldwide supplier of precision engineering products and services, especially in the aerospace sector.

In between scouring Southern California for a new location for the shop and dealing with a magnitude of regulators in order to get the doors open, Folkes also managed to find the love of his life one day while sipping a hearty pint at a British-themed pub in Los Angeles after a long day of work. It just so happened that the Southern California lass was born just a few towns over from Folkes in Bromley. Talk about your stars aligning.

“It truly is remarkable to come over here to the U.S. and find someone sitting next to you at the bar who grew up near you, and then you get to know them and marry,” he says. “But that is what happens sometimes.”

It just so happens that Folkes is now overseeing a new finishing plant with sparkling new equipment and a new look on life. 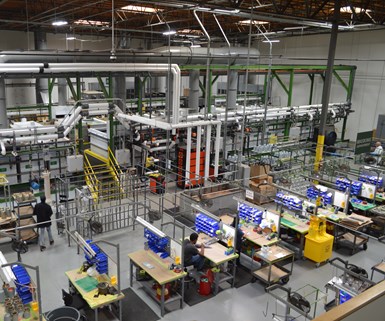 The shop’s parent company, Nasmyth Group, is a worldwide supplier of precision engineering products and services, especially in the aerospace sector. In 2014, the British group purchased Technical Metal Finishing (TMF) in Burbank to create Nasmyth TMF and offer a range of metal surface finishing capabilities to its existing customers, including precision masking, anodizing and chemical film coatings, passivation, painting and nondestructive testing.

Established in 2003, Nasmyth Group comprises 14 precision engineering businesses in the U.K., U.S. and India. It employs over 700 people worldwide in sectors that deal in aerospace, defense, energy, medical, specialist automotive, marine and space. The company provides design and reverse engineering; precision machining and shaping of high performance metals and materials; construction, testing and certification of both simple and complex structures using welding and assembly techniques; and surface treatments and repairs. Peter Smith, chairman and CEO of Nasmyth Group, says the purchase of TMF in the U.S. was an ongoing strategy to strengthen the group’s worldwide presence.

“We needed to provide our customers with continuously enhanced, fully integrated, precision engineering solutions on a global scale,” he says.
The original TMF site was 10,000 square feet, and Nasmyth Group added another 18,000 after purchasing a building next door to give it more room to grow. Unfortunately, within a year of buying the shop, the original space caught fire and burned in June 2015, leaving hardly any working equipment and 74 employees facing job losses.

Folkes was previously assigned to the U.S. by Nasmyth Group years ago to work in the Carolinas at a machining operation, but he regularly returned to his forever home in the U.K. once those projects were completed. Then, he got the call from his bosses to get to Los Angeles and sort things out, which included working with the insurance company in an effort to quickly rebuild and dealing with nervous customers concerned about their parts.

As soon as Folkes landed and got to what remained of the shop, its biggest customer showed up at his door and told Folkes he had one week to figure out what to do with its parts or they would be pulled and sent elsewhere. “What do you do?” says Folkes. “It was a complete mess.” 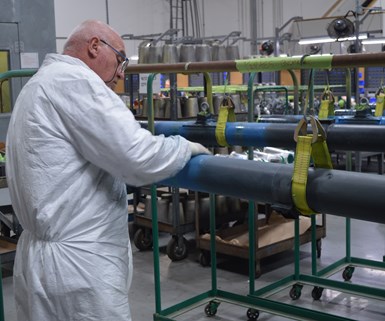 After the 2015 fire, Nasmyth TMF embarked on an uphill journey to find a new location and rebuild.

At the time, the customer base was evenly split between anodizing and liquid coating. About 95% of the work that Nasmyth TMF was doing in the area that didn’t burn was spray painting, so Folkes quickly called a few shops in the L.A. area to see if TMF he could parcel out the work for the anodizing customers or use their booths and lines after hours to get the work done.

Next, Folkes purchased new paint booths and installed them in the newer 18,000-square-foot building that Nasmyth TMF had purchased to expand the operation, which fortunately was not damaged.

“We tried to get permits for a new spray system, but we were next to a school and a hospital, and we could not get the proper permits from the air quality people,” he says. “Then, we determined that, if we used some of the old equipment in the newer building, it would be a retrofit and our current permits would apply. So, we moved over a fan from the roof and that seemed to work for us.”

With some of his operations back up and running in the adjoining building and some work being done by other shops, Folkes then set his sights on finding a permanent home for Nasmyth TMF that fit its needs and could meet its hopefully expanding operations. He spent hundreds of hours working with Burbank officials on plans to rebuild and install new anodizing operations, but the message soon came that it would be an uphill battle to put its lines back in that area.

“After a year or so, it was clear that we were never going to rebuild completely in Burbank, so we started looking elsewhere,” Folkes says. “I was looking all over Southern California and, when we went north to the valley area, people were a little more open for us to come here and open a business.”

In 2017, Nasmyth TMF settled on a spot in an industrial park in Valencia, about 90 minutes north of its Burbank location. It wasn’t easy, as city officials were concerned about the chemicals that the shop would be using, as well as the spraying operations and air quality issues. The fire department was especially concerned and not just because the last Nasmyth TMF burned down. But once city officials were convinced that the chemicals were not flammable, the path to moving in was set. 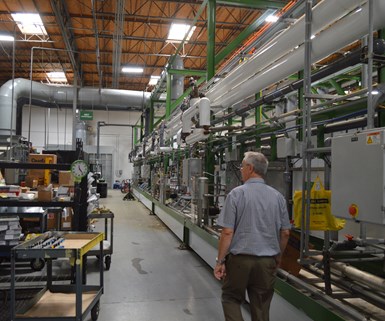 Approximately 19 months were needed to set up Nasmyth TMF’s new system. CJI used much of the time workin to get regulatory approvals from various agencies.

Nasmyth TMF worked with several architects and consultants in designing the new facility, and then called in CJI Process Systems to design, fabricate and install the anodizing lines and equipment.

“We really wanted a partner who could do all the things we wanted with the line, which is design it, build it and then install it,” Folkes says. “We looked at a lot of companies and CJI Process Systems seemed to be just what we were looking for.”

Between design and installation, it took roughly 19 months for CJI to set up the system and a lot of that time was working to get regulatory approvals from the various agencies that needed to sign off on all the requirements and specifications. The system is a sparkling masterpiece with new tanks, hoists, ventilation systems and bright lighting. It has even achieved zero discharge of any potentially toxic waste into the water system, an achievement that sets it apart from other similar manufacturing plants in the region. Nasmyth TMF says it has achieved zero discharge of any potentially toxic waste into the water system — an achievement that sets it apart from other similar manufacturing plants in the region.

Folkes says he is very pleased with how the project with CJI Process Systems turned out. The shop is servicing about 60 OEMs in the aerospace and defense sectors, and he is focusing on growing the business with work throughout the U.S., Canada and other parts of North America. He is even looking at expanding its current footprint and make its facility even larger.

“We plan to double the workforce over the next 10 years as we grow,” Folkes says.

“It’s been an interesting ride,” he says, while at the same time fiddling with his wedding band. “But well worth it.”