One of the factors that convinced Midlake Products & Mfg. Co. to move forward with an in-house powder coating line was a non-reactive pretreatment chemistry from Bulk Chemicals.

Growing your business often hinges on expanding your offerings. Perhaps no one knows that better than Midlake Products & Mfg. Co. Inc. Based in Louisville, Ohio, the company got its start as an industrial and custom hinge manufacturer in 1987. What started as a small family operation run out of a garage has grown into a 65,000 square foot facility that produces more than 650,000 hinges per year. Over the years, Midlake has expanded its offerings to provide its customers with a variety of metal fabricated components and machine parts. The company offers laser cutting, CNC bending, welding, hardware insertion and finishing, and continues to investigate capabilities to add to its roster. After several years of consideration, Midlake recently added a powder coating line.

“We didn’t necessarily aspire to be a powder coater,” says Jeff Rich, president of Midlake. “But over the years, we kind of continued to look back and say, ‘powdercoating is something that we're probably going to need to have in our shop.’”

According to Rich, the company had been outsourcing powder coating for approximately 30 years. Midlake had set the stage for further expansion, but was torn between adding more capacity for existing capabilities and adding something new.

“We had added onto our facility in 2012 with a 20,000 square foot addition,” Rich explains. “At the time we only needed 10,000, but were keeping this other 10,000 square feet available for some new capability. At the time, we weren’t quite sure it was going to be powder — but everything just kept leading back to powder coating.” 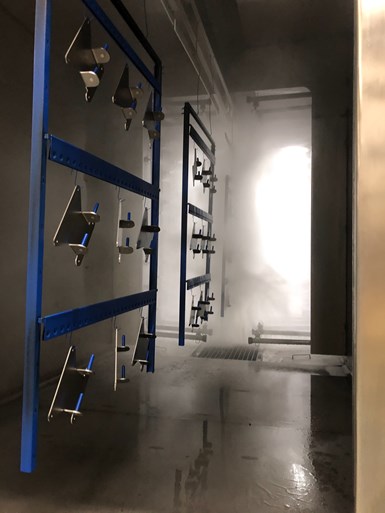 Midlake was searching for a cleaning process that was simple and environmentally friendly.

Rich says that the tipping point in the decision happened in 2018 at the metal forming, fabricating, welding and finishing expo FABTECH. Much of his time at the show was spent investigating powder coating and talking to equipment and chemical suppliers. Rich was determined to glean some details to help make an informed decision and recalls that one of the factors that convinced Midlake to move forward with a powder coating line was a pretreatment chemistry that he learned about at the show.

“As we were exploring the potential of bringing powder coating in-house, the cleaning seemed like the first step of that process,” he says.

One of the keynote speakers at FABTECH 2018 was Sergio Mancini, sales consultant with Bulk Chemicals (Reading, Pa.), supplier of chemical manufacturing services and pretreatment products for the metal finishing industry. Rich caught Mancini’s presentation on non-reactive cleaning processes and it piqued his interest. Due to increasingly strict phosphate regulations in Midlake’s locality, he was concerned about the environmental and waste disposal aspects associated with pretreatment and says Bulk’s non-reactive solution intrigued him.

“It almost seemed too simple to believe,” he says. “Certainly, what caught our attention was the simplicity and the environmental side of things. But we’re also hearing that in the future, phosphate-based systems are likely going to require paying some sort of a surcharge. We figured if we were going to start this line, why not just try to avoid all of that from the get-go and start with the best possible solution from day one?”

Rich stopped by the Bulk Chemicals booth to learn more and soon was convinced that it was something that Midlake needed to try for themselves. With the help of Bulk Chemicals, Midlake installed a small immersion line to start manually dipping parts as part of a test.

“We wanted to test out what Bulk Chemicals was telling us,” he says. “Could we use a cleaner, a rinse, a sealer and dry parts — and avoid having to use some sort of phosphate cleaning? So that’s what we did.”

The company manually dipped parts for about a year and was pleased with the results — but there was a problem. Internally the shop was sending more and more parts to its tiny test lab for processing whenever outsourced parts didn’t come back fast enough.

“We realized this is something we really needed to do in-house,” Rich says. “The cleaning process was working fantastically and Bulk Chemicals was doing a tremendous job of supporting us. So, we took the same process and automated it a bit.”

Rich explains that Bulk Chemicals was instrumental in setting up the pretreatment system, supporting Midlake through its testing and acting as a liaison  to the Ohio EPA as Midlake worked to get permits for its four-stage washer system.

Adding the powder coating line was the natural next step.

Based on the success with Bulk Chemicals’ cleaning process, Midlake began looking for other partners for its powder line.  The company turned to Midwest Finishing Systems (Mishawaka, Ind.) for the installation. Nordson (Amherst, Ohio) supplied the powder coating booth. 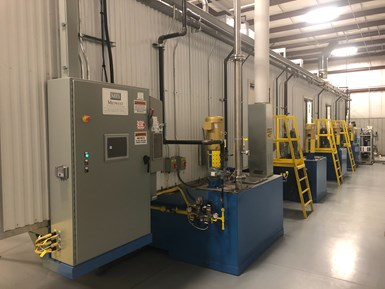 In all, Midlake’s new powder coating line is just over 500' of conveyor that handles up to 75 pounds per hook on 2' centers. The typical line speed is around 5 feet a minute. Parts go through a four-stage stainless steel washer built by Midwest Finishing. The first stage is Bulk Chemical’s E-CLPS phosphate-free cleaner, the second stage is a rinse, stage three is another rinse with RO water (the treatment of the RO water was provided by Midwest Finishing), and the final stage applies a sealer provided by Bulk Chemicals. The parts travel through a dry-off oven, into the Nordson booth and then finally make their way into the double pass cure oven, which was built and installed by Midwest Finishing. 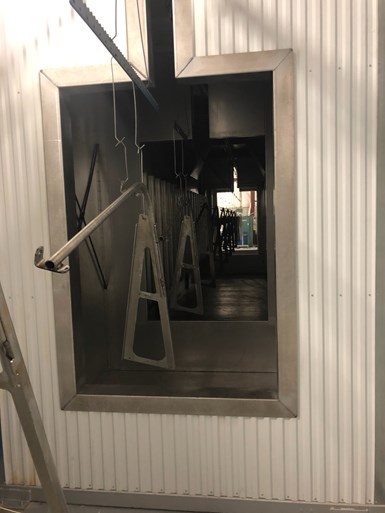 Installation of Midlake’s new powder coating line began in September 2020 and was completed in October 2020. Rich says the company currently has one shift working the line but plans to add a second shift prior to summer of 2021.