Professional Plating's commitment to new technology and equipment not only earned it a Products Finishing Top Shops status for 2017, but it also garnered them special notation for their enhanced technology processes.
#topshops #plating #marketing 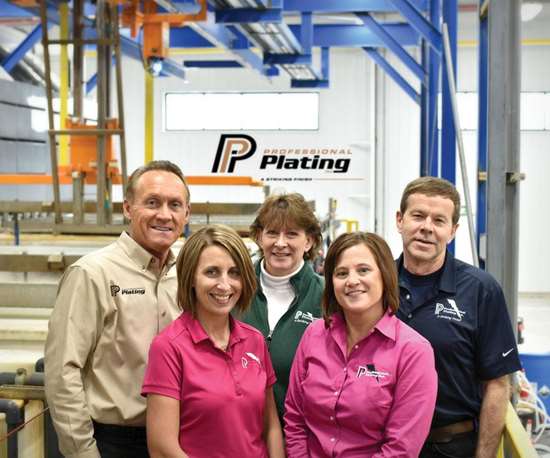 It’s a humorous take on the outstanding growth that Professional Plating has undertaken over the past decade, especially a recent $8.5 million project that result in 60,000 additional square feet of space that includes one of the largest zinc plating lines in the region.

How to Create a ‘Frictionless’ Plating & Coating Supply Chain

“For the last seven or eight years, we had been using two outside plating operations for the additional capacity, and we decided we need to bring that work in house to us,” Dietz says. “We are going two full shifts now, and it’s good to have the work right next to us.”

The company's commitment to new technology and equipment not only earned it a Products Finishing Top Shops status for 2017, but it also garnered them special notation for their enhanced technology processes.

“We told those shops that we would eventually, as the business grew, bring the work back, sort of a ‘Field of Dreams’ approach of building it and then having the work come,” Dietz says. “Like any job shop, it only made sense for us to have the business developed before building for it. We didn’t have to go out hunting for price once we built the line like a lot of shops have to do.”

The new line brought about 20 jobs back to Professional Plating, which happens to be one of the best places to work in the finishing industry, as the company celebrates and empowers its workers and encourages volunteerism and community support.

Professional Plating started in 1979 by Bob and Pat Endries, founders of Endries International, who wanted a dependable source of plating for their fasteners business. Since then, the company had steadily grown and become one of the premier finishing operations in the U.S., offering zinc coatings as well as electrocoat and powder coatings.

The steady growth has mirrored the installation of the latest plating technologies, including automatic lines and equipment that helps improve efficiencies and offers value-added services.

In 2009, they added 65,000 square feet to the almost 90,000 they already had to increase the storage area for finished product and added a fully automated, zinc barrel plating line.

In 2013, one of the rack zinc plating lines was decommissioned to make way for a new, custom-built plating machine to improve efficiency and design enhancements to ensure repeatable and consistent quality. They also added a black oxide production area that allows them to process parts that would be classified as rack or barrel, depending on part configuration.

The new rack line added in 2016 gives them the ability to plate parts as long as 110 inches, up from 72 inches.

“We also have made the change over to trivalent chemistry right in line with the new tanks,” Dietz says. “We are in the process of reviewing and working on adding another new barrel line, too.”

Professional Plating has had continuous improvement plans for years, looking for new technology and equipment. They recently added their first pick-and-place robotic sorting and stacking cell. The need arose, Dietz says, because the shop finishes more than 10 million blades for the sickle section market, and the effort to sort and stack so the parts are orientated correctly for the best racking efficiency is very time consuming.

“The program not only provides key capacity support, but also allows us to re-deploy our production team members to other value adding areas in a better way,” he says.

The improvements have been extremely beneficial for Professional Plating’s customers; the shop reports a 99-percent on-time delivery rate, and over 99-percent first-pass quality, which is especially impressive since the shops spends over 1,400 hours per week dedicated to part inspection.

“We started out 2016 about 10 to 15 percent up in sales in a lot of areas, and then things flattened out for us, so overall we are pretty happy with how things went,” Dietz says. “Considering we spent $8.5 million on new projects and we were able to maintain our sales and our customers, we are very happy. We are excited about where we are positioned for 2017 and beyond.”