There are many factors to consider when choosing an industrial paint booth for finishing large equipment. You want a booth that is best for your application and suitable for your production volume — both today and in the future.

Choosing the ideal airflow style for your business needs is perhaps the most important decision in the purchasing process of a new large equipment paint booth. The right booth will set you up for success; however, the wrong one could severely hamper your production. 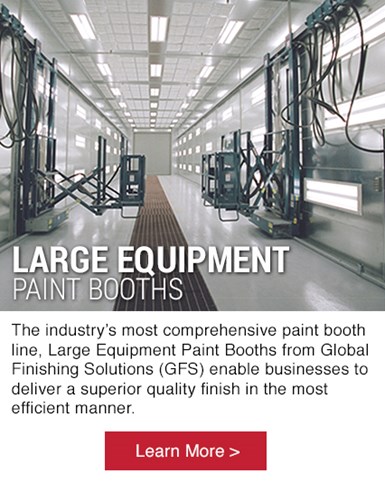 One of the primary goals in paint booth selection is to achieve laminar airflow, in which air moves at the same speed and in the same direction, with minimal crossover of air streams. In contrast, turbulent airflow creates swirls and eddies, depositing particulate matter on surfaces randomly and unpredictably.

Laminar airflow is more easily attained by maximizing the filter quantity within the chamber, which ensures efficient particulate filtration. Fully engineered filter chambers are key to maximizing paint application transfer efficiency and overspray capture. When a booth has laminar airflow, an envelope of air carries overspray and contaminants away from the product being painted, resulting in a high-quality finish and less rework.

Booth balance is another crucial factor in paint booth selection. When a paint booth is balanced, the same amount of air is pulled into the booth as is pushed out.

The most noticeable thing that happens when a paint booth becomes unbalanced is the filters are quickly soiled with paint and particles. As the filters become clogged, the exhaust fan experiences greater resistance and moves less air. The intake fan is less likely to see a change to its resistance and continues to supply the same volume of air.

A paint booth must be pressurized in order to achieve balanced air pressure. With only exhaust fans, non-pressurized paint booths operate like a vacuum.

The result is that the zero point of pressure in the booth starts to migrate toward the center of the booth. Wherever this zero point is located, a cloud of paint is visible when the painter is spraying. To move the zero point back to the intake of the booth, the exhaust fan must run at a faster rate to compensate for the increased static pressure.

A VFD on the exhaust fan allows exhaust fan speeds to be altered to help provide clean, evenly distributed airflow velocities throughout the loading and lifetime of the exhaust filters. This increase in fan speed enables exhaust filters to load more evenly and efficiently to capacity. Air speeds can be adjusted as well to accommodate different size products being painted.

The airflow style you select for your paint booth plays a big part when it comes to contamination control. The following are the three primary airflow styles for industrial large equipment paint booths.

Crossdraft booths are the most popular airflow option for industrial applications because they work for a large number of applications and are cost-effective.

Crossdraft paint booths are a versatile, budget-friendly option for industrial applications, but the risk of cross-contamination is high.

But crossdraft booths have the greatest potential for cross-contamination. Controlling overspray in crossdraft booths is difficult, especially in longer booths. If multiple parts are lined up in the booth, as one is sprayed, the air — along with paint overspray — may be pulled across the second product, affecting the quality of the paint job.

“If you are painting the back of a bus, for example, what you are painting on the air intake side will be pulled all the way down the side of the bus,” says Royce Day, industrial project manager for Global Finishing Solutions (GFS).

“There is a greater chance of contamination and higher potential for dry spray affecting the quality of finish due to the length of overspray travel during application,” he says. “This can also affect non-painted surfaces, as the overspray travels toward the end of a longer product in a crossdraft booth than it does any other type of booth.”

Side downdraft booths are noticeably different than crossdraft booths, as they feature a more uniform airflow. A filtered ceiling, in addition to exhaust plenums that run along both sides of the booth, make the airflow consistent from end to end. The airflow does not draw overspray across the product being painted; it instead flows downward, over the product and toward floor-level plenums. This also provides greater contamination control.

Side downdraft paint booths provide greater contamination control than crossdraft booths, and they are more cost-effective than downdraft booths because no exhaust pit is required in the floor.

Downdraft paint booths are the most expensive type of industrial large equipment booths, yet they are best at controlling overspray and contamination.

Not including pit installation costs, downdraft booths are about 25 percent more expensive than crossdraft booths. In addition to a full ceiling of intake filters and a plenum, pit grating is a large expense.

Weighing the Added Cost of a Downdraft Booth

The decision on whether to purchase a crossdraft booth or spring for a side downdraft or downdraft booth should be predicated on whether the booth is sufficient for your current and future production, as well as for your desired finish quality.

In the automotive refinish industry, downdraft booths are best because the nature of the airflow produces the fewest blemishes, with the least amount of buffing required. Body shops can generally make up the 25 percent added cost for equipment in less than a year, thanks to increased throughput and labor savings, with not as much time needed for cutting and buffing.

A manufacturer’s desired finish quality often plays a large role in determining whether a downdraft paint booth is worth the added expense.

“When you are painting tractor parts, structural steel and modular components, you are not looking for a Maserati finish,” Day says.

If you are finishing something that requires the bottom to be painted, such as an airplane, a downdraft booth can pose challenges. Painting the underside places the painter between the paint gun and the floor. In this case, in a downdraft booth, overspray is pulled away from the object being painted and toward the floor filters, making it difficult to control.

Compared to crossdraft booths, downdraft booths require a significantly higher volume of air — about 20 to 40 percent more. When empty, air velocities in downdraft booths range from 30 feet per minute (fpm) to more than 100 fpm. This is an added expense, both in upfront capital costs and ongoing operational costs. Depending on the application, the increased cost is often justified.

“If you want a Class A paint job out of a crossdraft booth, you are going to spend a lot of time buffing the product,” Day says. “If you can put it in a downdraft booth and cut your buffing labor times, you are coming out ahead.”

ROI Should Not Be Understated

Most large equipment paint booths go into production or repair facilities for larger product and batch-type applications. This includes the aerospace industry and manufacturers of railcars, buses, tractors, trailers and boats, among others.

Regardless of your application, before investing in capital equipment, you need to answer several questions, including:

“It is all about the ROI,” Day says. “How fast can I get it done? Can I achieve the same or better quality? And how much is it going to cost?” 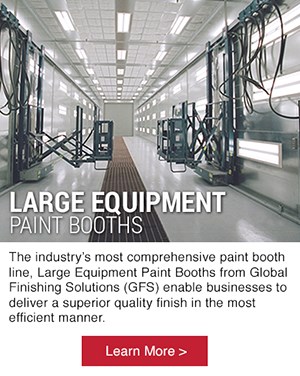