Whiskers are a problem that has plagued the plating industry for several years, and it isn’t something that a good shave and a haircut will solve. However, research is continuing to improve on ways to prevent them.
#plating 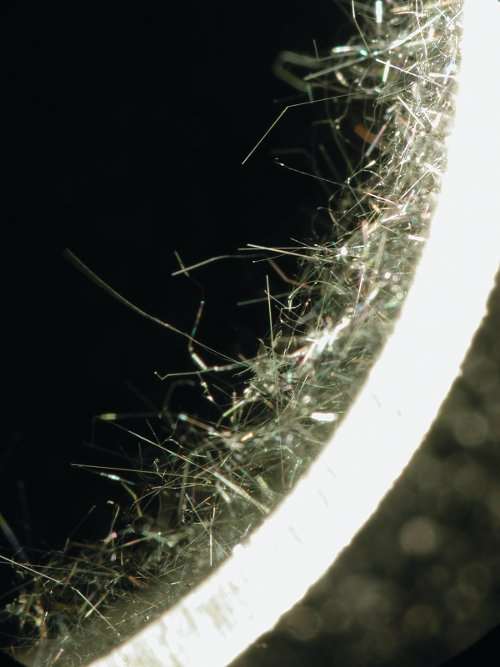 This steel pipe was zinc-coated using a "hot dip galvanization" (HDG) process (i.e., immersed into molten zinc). Despite frequent claims to the contrary, HDG coatings are NOT immune to the formation of zinc whiskers as this specimen clearly shows.

Whiskers are a problem that has plagued the plating industry for several years, and it isn’t something that a good shave and a haircut will solve. However, research is continuing to improve on ways to prevent them.

Whiskers on electroplated parts—especially in the electronic and computer industry—have caused some high-end equipment to fail or to perform erratically because of discrepancies and interference in the finished surface.

The problem has become serious enough that NASA’s Goddard Space Flight Center in Greenbelt, MD,—the largest congregation of scientists and engineers in the U.S. with about 10,000 staff members—has taken on the research and hopeful elimination of the nasty whiskers since it is looking at using tin instead of lead components in electronics.

Whiskers are electrically conductive, crystalline structures of tin or zinc that often grow from surfaces where electroplated zinc or tin is used as a finish. Although smaller than a human hair, they can grow several millimeters, and sometimes in excess of 10mm, causing electronic system failures and short circuits on closely-spaced circuit elements.

LONG HISTORY OF WHISKERS
It isn’t a new anomaly: the first research was written in the 1940s. But the battle to curtail whiskers has endured for several decades.

How bad is the problem? Rich Hill, president of Data Clean, a company that specializes in cleaning and remediation of contaminated facilities, says that zinc whiskers may affect one or more components in 50% or more of the computer racks and cabinets in any given environment.

“As an industry it was generally considered that the only serious source of zinc whiskers in computer facilities was certain types of access floor panels,” Hill says. “How wrong was that assumption? Zinc whiskers have been found on a variety of metal components within all types of facilities, including: steel building studs; electrical conduit; suspended ceiling T-bar grid and hanger wires; and of course access floor panels, pedestals, pedestal heads, and stringers.”

As strange as it sounds, the clean environments that house critical electronic components could be the cause of unexplained equipment failures, says Thomas Tod, an electrical engineer in Burns & McDonnell’s Infrastructure Group.

RAISED FLOOR OFTEN THE CULPRIT
“Electronic equipment performs best at temperatures near 70°F,” Tod says. “Raised floors provide a plenum through which cool air can be forced through the base of equipment and out of the cabinet, cooling components along the way. Since the majority of this equipment is enclosed within a larger cabinet, the construction is generally open to allow more efficient cooling. Zinc whiskers that fall from disturbed floor tiles into the plenum space below often end up in the equipment via the cooling supply.”

Tod gave an example of how the whiskers on finishes can affect electronic equipment. Recently, one of his company’s clients contracted for major structural, ventilation and cabling changes within a critical data center. Some of the changes included floor tile replacement, construction of separation walls, installation of new HVAC equipment and cabling modifications. Each of these changes not only disrupted the plenum space below the 20+ year-old raised floor, but also changed the environment within the space.

Tod says that since a hot-dipped material is less likely to produce zinc whiskers, he recommends to clients to use corrosion-resistant materials other than galvanized steel when building or remodeling facilities.

“This is often more expensive and difficult without sacrificing mechanical protection,” he says. “Hot-dipped galvanized materials have fewer internal stresses than electroplated materials. These internal stresses, coupled with thermal cycling, are the primary causes of whisker development.”

HOW TO PREVENT WHISKERS
So what can platers do to reduce the possibility of whiskers?

Lyudmyla Panashchenko, a researcher at the University of Maryland, wrote in a paper in 2009 that an excessive use of organic compounds in the electroplating bath can lead to higher instances of whiskers.

“The use of low-organics (electroplating baths with relatively few additives) Sn deposition process did not yield any whisker growth even after long-term high temperature and high humidity storage of 95°C/95%RH,” Panashchenko says in his research.

Using higher current densities promotes a lower cathode efficiency of tin deposits, resulting in high hydrogen evolution that has been correlated to higher whisker propensity, Panashchenko says, adding that brass is the most whisker-prone substrate for tin and smoother substrates are more prone to the formations.

The electronic failures – especially in computers and motherboards – are what raised the concern of NASA officials, who fear something bad happening to one of its Space Shuttles or rockets which are heavily driven by technology.

“The drive to eliminate lead from electronics has resulted in an interest in the use of pure tin finishes as an economical lead-free plating option,” says Dr. Mike Osterman, director of technology transfer Center at the University of Maryland’s Center for Advanced Life Cycle Engineering, the largest electronic products and systems research center focused on electronics reliability.

NASA TAKING HARD LOOK
Tod says NASA and other researchers are beginning to take the whiskers problems more serious than ever.

“Temporary glitches may be passed off as a minor problem, but the source is the same,” he says. “A catastrophic event may be around the corner.”

Learn More
Tin Whiskers Revisited
To read more about the trouble with tin whiskers you can Art Kushner’s Plating Clinic by visiting http://www.pfonline.com/articles/clinics/1107cl_plate4.html.

The uncertainties associated with tin whisker growth make it extremely difficult to predict if/when tin whiskers may appear. The following list provides some suggestions for reducing the risk of tin whisker induced failures.
•    Avoid the use of pure tin plated components if possible. Utilization of procurement specifications that have clear restrictions against the use of pure tin plating is highly recommended. Most (but not all) of the commonly used military specifications currently have prohibitions against pure tin plating. Studies have shown that alloying tin with a second metal reduces the propensity for whisker growth. Alloys of tin and lead are generally considered to be acceptable where the alloy contains a minimum of 3% lead by weight. Although some experimenters have reported whisker growth from tin-lead alloys, such whiskers have also been reported to be dramatically smaller than those from pure tin plated surfaces and are believed to sufficiently small so as not to pose a significant risk for the geometries of today's microelectronics.
•    Post Procurement It can be dangerous to rely on the part manufacturer's certification that pure tin plating was not used in the production of the product supplied. NASA GSFC is aware of several instances where the procurement specification required "No Pure Tin", but the product supplied was later determined to be pure tin.  In some of these instances, tin whisker growths were also discovered.  Users are advised to analyze the plating composition of the products received as an independent verification.

When simple avoidance of pure tin plating is not a viable option (such as in cases where its use is discovered late in system integration/test), then the following approaches may also be considered to reduce risk.
•    Solder Dip the plated surfaces sufficiently using a tin-lead solder to completely reflow and alloy the tin plating. Obviously, special precautions are required to prevent thermal shock induced damage, to prevent loss of hermeticity and to avoid thermal degradation. This approach may have limited success since it may be difficult to ensure that the entire surface is properly reflowed. See the April 2004 Photo of the Month for one example of the limitations associated with this particular mitigation strategy.
•    Replate the whisker prone areas. Some manufacturers may be willing to strip the pure tin plate from finished products and re-plate using a suitable alternate plating material such as tin/lead or Nickel.  Caution is advised if considering use of an external plated finish (e.g., Sn-Pb or Cu) on top of an existing pure tin deposit.  There is some evidence that whiskers may still form from the pure tin layer and protrude through the thin external deposit.
•    Conformal Coat or foam encapsulation over the whisker prone surface can significantly reduce the risk of electrical short circuits caused by whiskers.  The choice of coating material, thickness and possible degradation with time/environmental exposure can impact the effectiveness of the coating. NASA GSFC experiments have shown that use of Arathane 5750 (formerly Uralane 5750) conformal when applied uniformly to a nominal 2 to 3 mils thickness can provide significant benefit by containing whisker growth outward through the coating. This coating is also resistant to being penetrated by whiskers attempting to puncture the coating from the outside.