As we head to the Windy City for NASF’s SUR/FIN 2013, let’s take a look at some of the oldest continuous plating operations in Chicagoland.
#plating #pollutioncontrol #nasf 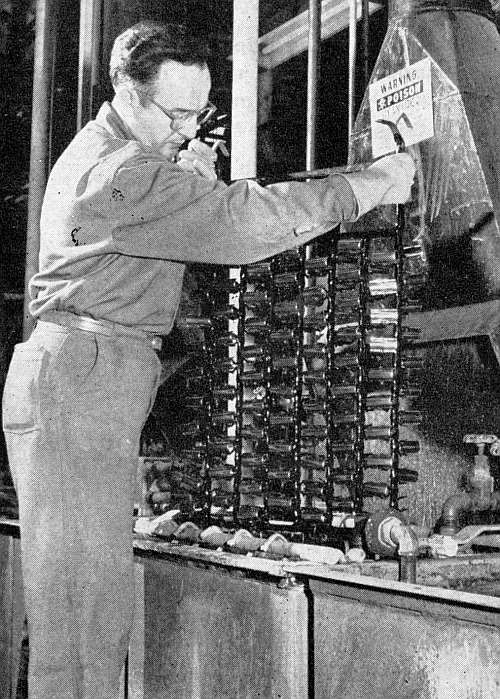 It’s hard to imagine what Robert Zacharias endured in 1904 soon after opening the doors to the finishing shop now known as Precision Plating in Chicago.

Finding his niche in plating picture frames, Zacharias soon added gold- and silver-plated purses and belts to the finishing line before a fire destroyed his entire operation on Clinton Street a few years later. Uninsured but undaunted, Zacharias re-opened his plating shop on South Oakley, only to face the Great Depression of the 1930s that nearly took his business under again.

Inside Zinc and Zinc-Nickel Post-Plating Protective Finishes
Avoiding Adhesion Failure Due to Paraffin For plating applicators, paraffin residue can cause poor adhesion, delayed blistering or other poor-...

“I can only imagine what he went through,” says Jim Belmonti, who bought Precision Plating nearly 40 years ago and whose family still runs it.

But with World War II, Zacharias and Precision Plating took advantage of the demand for precious metal plating on small parts to exacting tolerances, and the company began to soar with both its oblique open plating barrels and horizontal portable barrels lines.

With Zacharias’ sons, Dick and Jim, at the helm a few decades later, the company moved in 1960 into a new 15,000-sq-ft building they designed on Keystone Avenue. They added a continuous plating shop in Skokie, Ill., in 1966 to focus on coil coatings, and that is still a major volume of their work at the existing 65,000-sq-ft plant they built on Peterson Avenue in Chicago in 1971.

Belmonti joined Precision Plating as plant manager when the company moved to that building, having worked for several years at Castle Metal Finishing and Udylite in Chicago. He bought the company a few years later.

“Robert and his sons had a philosophy that I tried to maintain, which was: if you do your damndest for the customer, they’ll keep coming back,” says Belmonti, who is now retired and watches his son, Gary, run the family business.

“We survived through rough times, regulations and every Johnny-come-lately who tried to undercut us and only lasted a few years,” Belmonti says. “There were years that, by December, I would almost collapse from exhaustion. You’ve got to do what you’ve got to do, but it almost kills you to stay open.”

It was in the 1980s that Belmonti and his sales manager, Paul Rathje, started promoting an alternative to gold plating because of its high costs, and palladium-nickel took off for Precision Plating.

The “Dynamic Duo” sold a connector company on the idea of palladium-nickel as a less-expensive alternative, and just over a year later a major contract came their way: plating 1.4 billion contacts for IBM in the first year alone.

“Nothing came easy,” Belmonti says. “But looking back, I’m so proud of what the Zacharias family and we are doing to keep small businesses going. The biggest thing we sold was our reputation, and our customers kept buying. Thank goodness for that.”

As the NASF gets ready to return to Chicago for its annual SUR/FIN conference, we looked at some other long-time Chicago-area plating operations:

Back at the turn of the century, Oscar Smith paid the rent on Nobert Plating’s building by refurbishing gold and silver trays and antiques for the rich and famous living in the city’s Gold Coast neighborhood along the North Side.

“He began working for a plating business called Nobert & Newman around 1857, and eventually purchased the company which is now Nobert Plating back in 1903,” says Smith’s great-grandson, Rob Sickles, who currently runs the company with his mother and sister.

Work began to pick up when Smith got some orders for the Boulder Dam—now Hoover Dam—in the mid 1930s, silver plating electrical components for that project as well as for the Argonne National Laboratory outside Chicago that opened in 1946. Argonne was the first national science and engineering research laboratory in the United States.

By that time, a new generation was ready to take over. Smith sold the business to his son, Robert, after World War II, and his legacy of craftsmanship and quality continue under the leadership of Robert’s daughter, Diann Sickles, who has served as president and CEO of the company on North Ashland Avenue since 2005.

Her children, Rob and Jamie Sickles, help oversee the operations, which include copper, silver, nickel, tin and tin-lead plating on aluminum, and electroless nickel metal plating.

S&C Electric
When S&C Electric began in 1911, the electrical industry was rapidly expanding and fraught with problems, as technologies for interrupting current were inadequate at best. After a fire at a generating station two years earlier, Commonwealth Edison had asked engineers Edmund Schweitzer and Nicholas Conrad to come up with a better way to curtail high-voltage arcing. They invented the “liquid power fuse” filled with a fire-suppressing liquid.

The new company, which opened shop on Wilson and Ravenswood Avenues on Chicago’s far north side, started making and plating parts that were sold all over the world. In 1949, the production and finishing operations moved to a new facility on six acres on Ridge Boulevard. By the mid-1950s, plating had ramped up as metal-encased circuit breakers became more popular, and the plating lines grew even larger. The now-50-acre site is now known as the John R. Conrad Industrial Complex.

The plating quality continues today with advanced solutions for electric power delivery systems all over the globe, and there are offices in Canada, Brazil, Mexico, the United Kingdom and China. n

Aamro Corp.
Founded in 1946 as a deburring shop called Roto Products, Aamro has been family-owned and operated for three generations on South 26th Avenue in Broadview.

Ace Plating
Located on West 48th Place, this shop was founded in 1962 and performs polishing, buffing, lacquering, e-coating, powder coating and a wide variety of finishing.

Al Bar-Wilmette Platers
Al Bar Labs started in the 1880s and merged with Wilmette Electroplaters in the 1940s in its current location on Green Bay Road in Wilmette.

Arlington Plating
Founded in 1945, this company specializes in the automotive and motorcycle industry, including hub covers, step tubes and chrome bumpers for Chrysler, GM, Toyota and Ford. www.arlingtonplating.com

Berteau-Lowell Plating Works
This company on West Fullerton Ave started in 1946 and focuses on copper, nickel and chromium coatings.

Castle Metal Finishing
Located next to O’Hare Airport on North 25th Avenue, this company began in the 1960s and specializes in plating on stainless steels and exotic metals.

Grove Plating
Since 1956, this plater in Fox River Grove focuses on handling specialty and delicate parts.

Jensen Plating
This shop on Western Avenue was founded in the 1890s and is a rack metal finisher specializing in decorative finishes.

Reliable Plating
Started in the 1950s by the Greenwell family, this company suffered a fire in 2008 but has rebuilt and is stronger than ever.