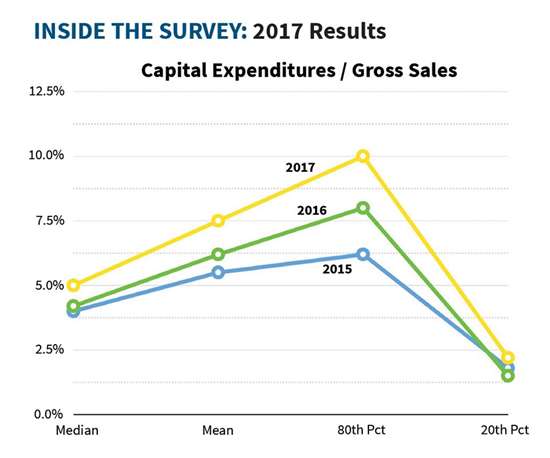 Inside the Survey: The survey trend over the past three years shows capital expenditure investment rate is moving up.

2017 Top Shops Benchmarking Survey: Investments and Profits are Trending Up 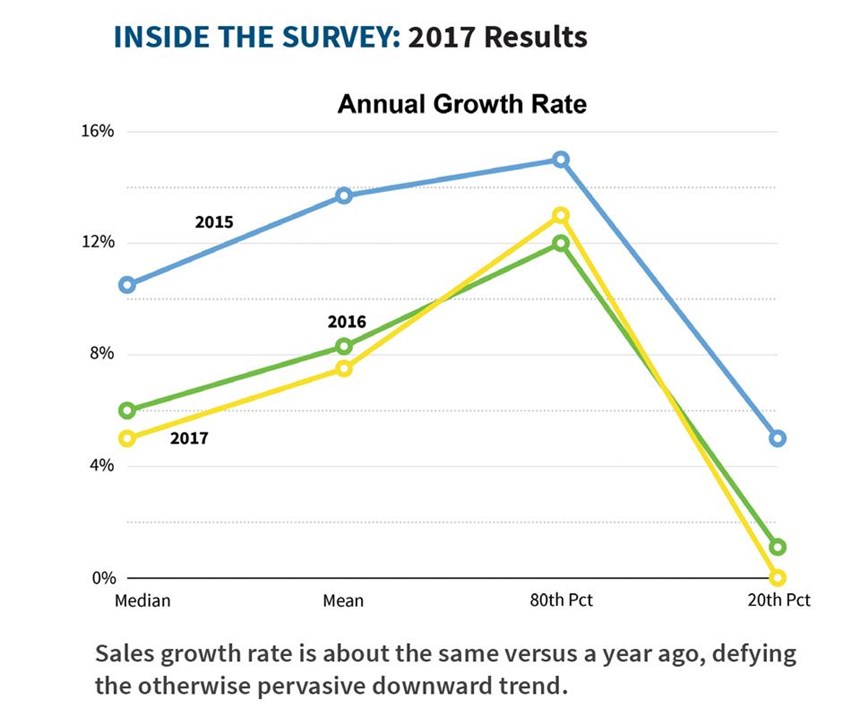 Inside the Survey: Sales growth rate is about the same versus a year ago, defying the otherwise pervasive downward trend. 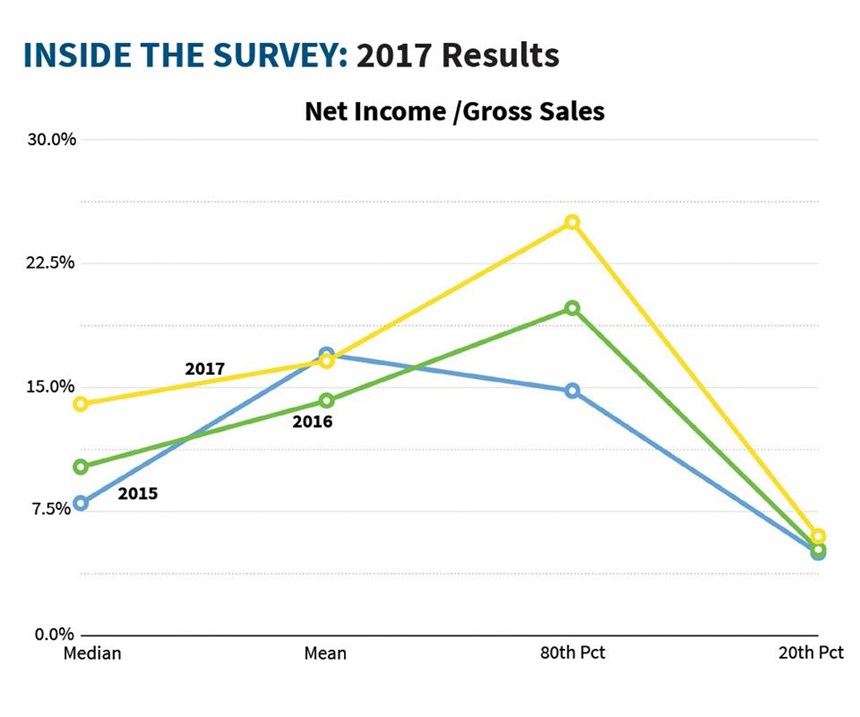 Inside the Survey: Net Income/Gross Sales 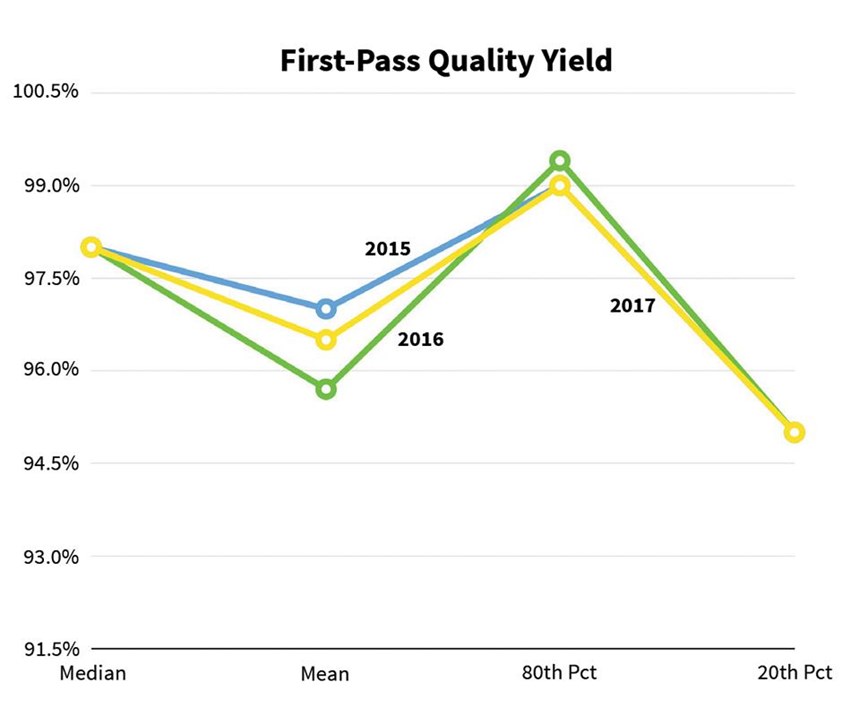 Inside the Survey: First-Pass Quality Yield 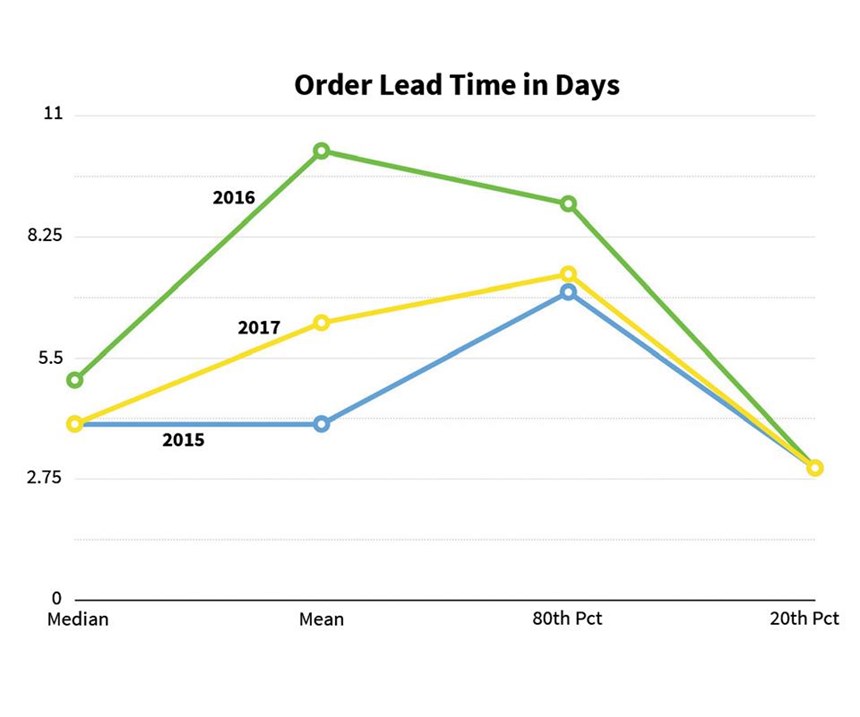 Inside the Survey: Order Lead Time in Days

Jan Schafer has only stepped foot in a few electroplating shops, but she knows a lot about how the most efficient and profitables ones operate.

Each year, Schafer uses data from shops to compute scores and run algorithms that determine which shops place in the top echelon of the plating industry, and thus earn status as a Products Finishing Top Shop. Schafer’s team also tabulates the data to provide a comprehensive benchmarking report given back to participating shops to examine and use in their own operations to improve efficiencies and reduce waste.

This year, Schafer is looking at trends, a first-time analysis opportunity now that the program has been in place for three years. Looking at the different measures across years, she’s seeing a fair amount of consistency in how the values move over time, but is calling out some “departures” as well.

Another observation is that, as a whole, shops are increasing their capital expenditures each year, with shops ranking at the top on this measure spending at an average rate of 10 percent of gross sales. That rate of spending is up almost 2 percentage points from a year ago, and up almost 4 points from the year before. For perspective, average spending on capital equipment among all shops is just half that rate.

Schafer offers a snapshot of what trends she sees in the 2017 report, which takes into account business activities in 2016.

Focusing on shops with values in the top 20 percent on the respective measures:

Shops that completed the Products Finishing Top Shops Benchmarking Survey will soon receive a series of reports that separate the survey data into categories, including type of finishing business (job shop, contract shop or captive operation), number of employees and number of parts produced.

In addition, we send an Executive Summary comparing responses between the Top Shops benchmarking group and the rest of the survey participants. This benchmarking group represents the top percentage of electroplating shops determined by totaling the points assigned to select business- and technology-related questions.

These reports not only serve as a baseline “report card” of sorts, but also provide hard data that will eliminate the need to rely on gut feelings as a method of identifying and prioritizing improvement efforts. The survey for liquid and powder coating shops starts May 1.

How to Become a Top Shop

The survey consists of almost 50 questions about finishing operations, including questions regarding best finishing practices, finishing technology and business operations, as well as employee training and human resources.

All shops that complete the Products Finishing Top Shops Benchmarking Survey receive two detailed data reports that separate the survey data into categories that include number of employees and the comparison between the Top Shops benchmarking group and the rest of the survey participants. This benchmarking group represents the top percentage of shops determined by totaling the points from select business- and technology-related questions.

These reports not only serve as a baseline “report card” of sorts, but also provide hard data that will eliminate the need to rely on gut feelings as a method of identifying and prioritizing improvement efforts.

In the meantime, how can your shop prepare to earn the Top Shop status?

The first step is to compare your shop’s performance with the best in the business using this year’s Top Shops Executive Summary, and then formulate a plan for improvement in areas such as finishing technology, performance and practices, business strategy and human resources.

The best place to go for additional help and training is through trade organizations such as the National Association for Surface Finishing (NASF) and the Aluminum Anodizers Council (AAC). The NASF and the AAC can help captive and job shops that want to increase efficiency, improve their bottom line and work their way toward becoming a Top Shop.

Working with the AESF Foundation, the NASF holds in-person and online electroplating courses to help shops train staff in the latest and most effective processes.

Both organizations offer a variety of training and educational programs designed to help shops improve their performance.