The automated film overlay process is touted as faster, more energy efficient and at least as durable as paint
#vacuum-vapor

Why paint a car body when you can wrap it instead?

Fu-se’s thermoform system starts with the TOM (Three-dimensional Overlay Method) it developed 20 years ago. Its machines are being used in multiple industries to coat everything from electrical appliances and personal electronics to vehicular interior trim, door handles and mirror housings. 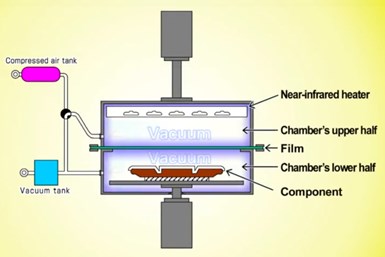 The latest iteration of TOM has been scaled up to coat components measuring as large as about 4x7 feet—or use the same size sheet to coat multiple small parts simultaneously. Fu-se is touting the new system as an alternative to painting body outer panels.

Other companies market films that take the place of paint, of course. But applying them to complexly shaped parts can be difficult. Fu-se says its vacuum system and special film formulation overcomes that issue, while making the application process much faster.

The prototype system loads one or more parts to be coated into the lower half of a chamber that is covered by a secured sheet of film. The top half of the chamber is then lowered to create a pressure-sealed container.

Near-infrared heaters warm the film as a vacuum is formed on both sides of the film. When the proper film temperature is achieved, the top half of the chamber is flooded with compressed air, pushing the film down and onto the parts.

The application itself is completed in less than one second. An adhesive layer in the film anchors the material to the parts and hardens the film as it cools. 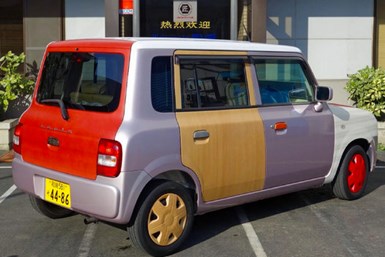 On the other hand, Kyowa notes, its film can be given the texture and appearance of cloth, wood, woven carbon fiber and other materials. The feature offers new appearance options for vehicle exteriors.

Fu-se is showing prototypes of its system to carmakers now, offering to customize it to suit customer needs. The supplier says it also may offer access to its technology for a licensing fee.