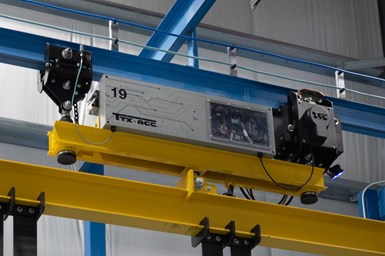 Overhead transport systems are common across most areas of manufacturing, and in the finishing industry, they are nearly ubiquitous. Continuous carrying systems are frequently used to keep parts moving into and out of processes, and they can be a hassle, requiring both space and maintenance to perform. Additionally, many continuous systems lack flexibility, as any adjustment to the speed of the line will change it for every part.

A new system addresses these problems by providing a modular solution. While a chain conveyor and other continuous systems move every part they carry at the same time, the Automated Conveyor Carrier system (ACC®) consists of automated carrier vehicles that move independently along I-beams. According to Therma-Tron-X (TTX), it simplifies transport systems while simultaneously improving the facility’s ability to adjust the line on the fly.

Users can adapt the ACC for any painting or assembly operation. As a modular system, the facility can dedicate different vehicles to different tasks, enabling it to use a single conveyance system for just about every part in its line.

The ACC® is designed to be a flexible solution for moving parts through any painting or assembly operation, or any other part of a facility. It utilizes wireless, independently programmed vehicles that run along I-beams to transport parts of numerous volumes and shapes across a facility. “The ACC® is designed with flexibility in mind,” according to TTX Vice President of Sales Chad Andreae. “It enables users to have a modular, scalable conveyance system that makes it easy to adapt production volumes for all scenarios.” Essentially, this system enables a facility to efficiently move a variety of different parts through different processes without having to dedicate an entire line to each one.

Each vehicle is mounted onto the I-beam like a traditional carrier, using a spring-loaded traction wheel to propel it along the beam and using battery power to avoid cables. Instructions reach each individual unit through a wireless ethernet system. Because each vehicle moves on its own, the facility can dedicate different vehicles to different parts and different tasks, enabling it to use a single conveyance system for just about every part in its line. “If a customer has some very heavy parts and some very light parts, they can all be accommodated,” Andreae says. “Do some parts have longer process times or perhaps need to skip a process? No problem.” 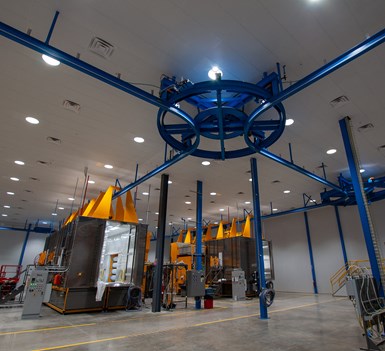 The ACC travels along I-beams that to transport parts anywhere in the facility. Turntables like the one pictured here further increase access to the facility.

Additionally, each ACC® vehicle can accelerate and decelerate independently of the others. This enables you to adjust process times on the fly, and it is simple to divert a carrier to a different destination. On top of that, decelerating at corners can even eliminate part swing. “As a carrier approaches a turn or a stop, it can slow down or ease into the stop, and then resume its speed,” Andreae says. “This controls part swing and drops that occur from jarring and jerky movements that are typical in traditional systems.”

This ability to adjust velocity as needed can make it much safer to move parts, but it is not the only safety feature. According to Andreae, the system is designed with safety in mind. “The vehicles are substantially quieter than traditional conveyors,” he says. “Each unit is equipped with audible alerts, signal lights and a collision avoidance system, allowing for easy situational awareness of each unit.” Additionally, unlike traditional chain conveyors, the torque available to drive the carrier along the I-beam is only enough to drive the individual, not the entire system. This makes it easier to avoid collision risks.

An Economic Solution to Moving Parts

In addition to being a uniquely flexible solution for moving parts, the ACC® is also economical. According to Andreae, the ACC® requires minimal infrastructure, which leads to smaller start-up costs and less maintenance. “There is no chain or maintenance of the chain as in traditional overhead systems,” Andreae says. “Furthermore, each conveyor is powered by 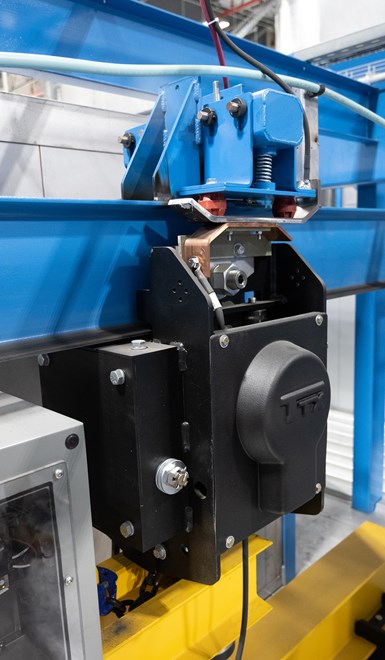 The ACC uses battery-charging stations placed strategically along the I beams it travels. This enables it to charge regularly without having to stop.

batteries, so a complex wired power infrastructure is not needed.”  This means that once the I-beams are installed, the only thing you need to do to increase capacity is purchase additional ACC® units. “You can scale up as needed with minimal disruption to your operations,” Andreae says.

According to Andreae, the ACC®’s approach to power charging minimizes downtime. “Charging stations are mounted throughout the system in locations that take advantage of the time that it takes for parts to pass through,” he says. Essentially, as the ACC® unit passes through the charging station during regular tasks, it charges. Additionally, it is also quite safe. “The power source for each unit is enclosed, but easy to replace, and there is no exposed conductor bar,” Andreae says.

The ACC® system is also quite economical to run and maintain. “Energy is saved throughout the heat-processing sections of the system, as the mass flow in the ovens is greatly reduced in comparison to traditional monorail and Power and Free systems,” Andreae says. This is because the ACC® vehicles travel above the ovens, pretreatment and paint processes while hooks or racks pass through a unique patented slot top design that minimizes heat loss.

The ACC® system provides flexibility and adaptability that many facilities can take advantage of, be they high production or high mix. It simplifies the installation and maintenance of a critical system while it enables the user to adjust their line to the needs at hand. As Andreae puts it, “It takes the complexity out of complicated finishing lines.” 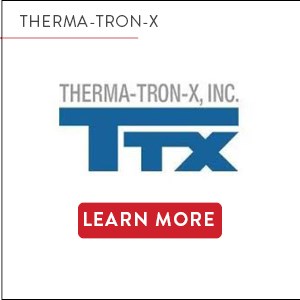 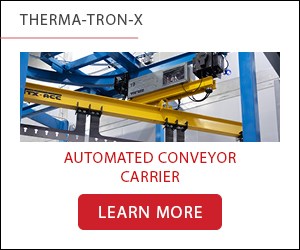