BR&F Spray wanted to eliminate the waste stream from its cleaning and pretreatment system. So the company switched from a five-stage conveyorized system to a two-stage batch system... 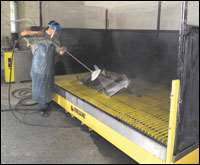 The batch pretreatment system performs the cleaning, phosphating and rinsing operations in one unit. With the addition of an evaporator, the system has enabled BR&F to completely eliminate any waste stream from its pretreatment process.

The batch pretreatment system performs the cleaning, phosphating and rinsing operations in one unit. With the addition of an evaporator, the system has enabled BR&F to completely eliminate any waste stream from its pretreatment process.

BR&F powder coats and liquid sprays a variety of parts for the high-tech computer and medical industries. These coatings was meet exacting standards, which means part cleanliness is extremely important.

BR&F powder coats and liquid sprays a variety of parts for the high-tech computer and medical industries. These coatings was meet exacting standards, which means part cleanliness is extremely important.

Deciding what is the right cleaning and pretreatment system for your finishing line has never been more complicated. Sometimes it seems the options are limitless. Should you hand wipe or use an automated system? Should you use aqueous cleaning chemistry or solvents? Will ultrasonics improve the system's cleaning ability? Do you need a blasting operation? While there are a number of options, choosing the right system will depend on a number of variables, including part volume, part size, substrate, time and level of cleanliness needed.

However, there is one other significant consideration that is becoming increasingly important. That is, what do you do with the waste from your cleaning and pretreatment system? Environmental regulations are becoming stricter at every level of government, forcing finishers to find ways to prevent or reduce the amount of waste they produce. And, there are even some cities that will not take any more of your waste.

BR&F Spray inc. (Santa Clara, CA) is a liquid painting and powder coating job shop located in the Silicon Valley. Because of its location, virtually all of BR&F's customers are in the high-tech computer or medical instrumentation industries. Consequently, most of BR&F's work comes in small quantities with a demand for quick turnaround time.

Also, the parts must be finished to cleanroom standards since they will be used in operating rooms, in manufacturing facilities that make computer chips or on machines that perform laser eye surgery. Therefore, surface preparation is a critical operation at BR&F.

Since its inception, BR&F has used a five-stage cleaning and pretreatment system. Parts were placed on an overhead conveyor and processed through the 900-gal dip tanks. Also, some parts were run through a chromated Alodine tank, which was eventually changed to a non-chromated Alodine tank. After the parts were cleaned, they were taken off the conveyor and coated in batch spray booths.

While BR&F was having no problems meeting its customers' cleanliness requirements, Ron Grainger, company president, was growing tired of dealing with the environmental regulations concerning his cleaning and pretreatment system. "We were under scrutiny from every agency out there," said Mr. Grainger. "We had a lot of inspectors coming in. So, I wanted to completely disconnect from the city. I didn't want to dump into the sewers. Basically, I didn't want them inspecting me all the time. So, my goal was to come up with a system that would be equivalent to or better than what we were doing and would enable me to disconnect from the sewer. Also, we were looking for a method that would enable us to clean aluminum parts and steel parts at the same time within the same operation."

In addition to the scrutiny from various regulating authorities and the hassle of dealing with multiple inspections, Mr. Grainger had a couple of other problems with his five-stage cleaning system. One problem was the number of chemicals that had to be stored on site. These chemicals could only be bought in 50-gal drums, which usually meant that BR&F had more chemicals on hand than were actually needed. In turn, this increased the company's insurance liability.

The second problem was the difficulty in cleaning and pretreating large frames. According to Mr. Grainger, "You just can't do a frame in tank. The frames might be 2 × 2-inch metal with holes and holes and holes. You could spend your life trying to plug up every hole and hope all the welds are good. So, these frames would have to be done entirely by hand, which was labor intensive and not very cost effective."

So, Mr. Grainger began looking at alternative cleaning methods. After some careful research he decided to take out his five-stage system and install a two-stage batch cleaning system from Pressure Island. The 3-in-1 pretreatment system has a single stage for cleaning and phosphating (which uses just one chemical) and a second stage for rinsing; all three processes are performed in one unit. The unit is easy to use with a separate spray wand for each stage. And, the unit has a closed-loop filtration system.

Mr. Grainger took a couple of extra steps as well. First, he installed an evaporator to completely eliminate any discharge from the cleaning and pretreatment system. Second, he put the unit inside of a concrete berm. "We built a specific area for the tank. Knowing the way the city is, we put in the bermed area so that if a spill should ever happen, it would be contained," stated Mr. Grainger.

Disconnecting from the City

With the installation of the new pretreatment system and the evaporator, Mr. Grainger was able to meet his goal of zero discharge. BR&F is no longer connected to the city sewer system, and the company no longer has to worry about disruptions from regulating agencies.

Disconnecting from the city sewer system has also paid off for BR&F because it no longer has to have any testing done on its waste by regulators. "Previously, we were required to have an off-site laboratory come in and randomly take samples of our discharges once a month, which could run anywhere from $300-400," explained Mr. Grainger. "Plus, somebody has to stop working to show the guy around. Then, the city would randomly come in and test the discharge. When we eliminated our five-stage system, we eliminated the city and the laboratory that was doing all of our testing."

Disconnecting from the city sewer system was just one of the many benefits from the installation of the 3-in-1 system. Another significant advantage of the system is that it requires less maintenance than the five-stage system. One reason for the reduced maintenance is that the new pretreatment system uses only one chemical. Less storage space is needed than for the multiple chemicals in a five-stage pretreatment system and the titrating chemicals. And, the plant has less liability because there are fewer chemicals around.

The second reason for the reduced maintenance is that the one chemical is much easier to monitor and adjust. "The chemical addition is very simple," stated Mr. Grainger. "We had a guy that had to titrate all the old tanks once a week. Titrating the tanks could take up to an hour-and-a-half. With the system we have now, you basically stick a pH strip in, and if it's 6, you add x amount of chemical. We were provided a formula by the chemical supplier. My guy that operates the machine said that it's the simplest thing he's ever seen. It's nice having a method of checking the concentration on the tank that isn't drawn out and requires a chemist to perform."

Another advantage of the new pretreatment system is that it takes up less floor space. "We eliminated 50% of the area that was required to do the conventional iron phosphate. So, we went from approximately 800 ft2 to 400 ft2. And, around here, that's money," said Mr. Grainger.

One final benefit is that BR&F has reduced its cleaning time from 35-40 min to 3-5 min. This is a significant advantage when you consider the markets that BR&F is serving and the importance of a quick turnaround.

The addition of the 3-in-1 pretreatment system has provided BR&F with a simple, inexpensive and reliable cleaning method. "We're getting a good finish. So far we have not seen any failures; we've not had any rejects," stated Mr. Grainger. In fact, Mr. Grainger said that if he were starting his company today, he wouldn't consider any other system.