Extreme High-speed Laser Material Deposition (EHLA) provides brake discs with an effective protection against wear and corrosion in a procedure that is both fast and economical.
#plating 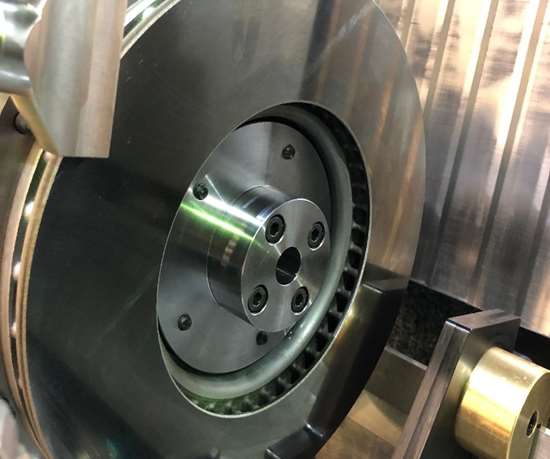 More than many other auto parts, brake discs are subject to repeated mechanical loads. As a result of this continual abrasion, they produce fine particulate matter, which poses a substantial environmental burden.

A new coating process developed by the Fraunhofer Institute for Laser Technology ILT and RWTH Aachen University can significantly reduce this impact. By using “Extreme High-speed Laser Material Deposition,” known by its German acronym EHLA, it has proved possible to provide brake discs with an effective protection against wear and corrosion in a procedure that is both fast and economical.

“The EHLA process is ideal for use in the automotive industry, especially for coating brake discs,” says Thomas Schopphoven, research fellow and team leader of Productivity and System Technology within the Laser Material Deposition group at Fraunhofer ILT. “Conventionally, it’s very difficult to coat brake discs because they have to withstand high loads and there are also economic and environmental considerations. But, with EHLA, it’s now possible to apply coatings that form a metallurgical bond with the base material of the disc and, therefore, adhere very strongly. Unlike conventional coatings, these do not flake and chip.” 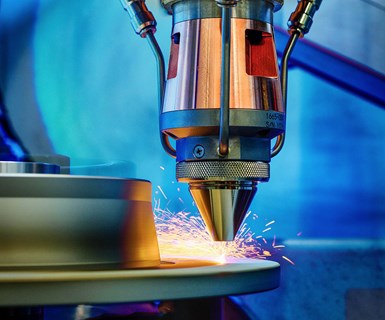 Coatings produced with conventional processes have pores and cracks. With the EHLA process, the coating remains intact and, therefore, provides longer and more effective protection for the component. This increases service life and prevents early failure as a result of damage to the surface of the brake disc. Moreover, the process is suitable for a wide range of materials. Therefore, it is possible to select an environmentally friendly coating for each specific application.

The EHLA process is a new process variant on the well-known laser material deposition, which has proved highly successful in areas such as the repair of turbine blades. EHLA does, however, have a number of decisive advantages.

With the EHLA process, the powder particles of the coating material are melted directly in the laser beam, rather than in a melt pool on the surface of the component. Since the melt pool is now fed by liquid drops of material, rather than solid particles of powder, the coating process is much faster, rising from the 0.5-2 meters per minute with conventional laser material deposition to as much as 500 meters per minute.

This also substantially reduces the exposure to heat of the material being coated. Unlike conventional laser material deposition, where the heat affected zone can have a depth of one or more millimeters, thermal exposure with the EHLA process remains in the micrometer range. This enables the use of entirely new material combinations such as coatings for aluminum or cast-iron alloys (as with the brake discs).

The low heat input prevents the carbon from dissolving from the brake disc into the melt, which would otherwise result in brittle phases, pores, joining defects and cracks in the coating and bonding zone. In other words, it is possible to provide brake discs made of gray cast iron with an effective coating that is firmly bonded with the base material.

With laser material deposition, the coating produced is usually at least half a millimeter in thickness. This consumes a lot of material and also makes finishing substantially more complicated. By contrast, the EHLA process produces very thin layers of between 25 and 250 micrometers. As a result, the coating is both purer and smoother, with roughness reduced to around 1/10 of its previous value.

Moreover, the EHLA process uses as much as 90% of the fed powder material. It is, therefore, extremely resource-efficient and more economical, which is a basic requirement for use in an industrial, mass-production setting.

Indeed, industrial applications could soon be a reality. Initial investigations have demonstrated that the EHLA process is capable of reliably producing coatings — with different material combinations — for conventional brake discs made of gray cast iron. A system that is ready for use in mass production, including a modified grinding process for finishing the components, is currently under construction at the Aachen-based company HPL Technologies.

Meanwhile, the virtues of this new process have persuaded the juries from three different prizes for innovation: the Joseph von Fraunhofer Prize in 2017; the Berthold Leibinger Innovationspreis in 2018; and, in the same year, second place in the Stahl-Innovationspreis, in the category “Steel in Research and Development,” as an environmentally friendly, laser-based alternative to chrome (VI) coatings.

Details on the EHLA process and other current trends from research and development will be presented, September 10-13, at the joint Fraunhofer booth (C12, in Hall 4.1) at this year’s IAA international motor show in Frankfurt.