To improve component finish as well as engine and gearbox performance for its customers, this racing motorcycle rebuild company based in the UK has gears and other components treated with a super-finishing process common to jewelry and aerospace applications. 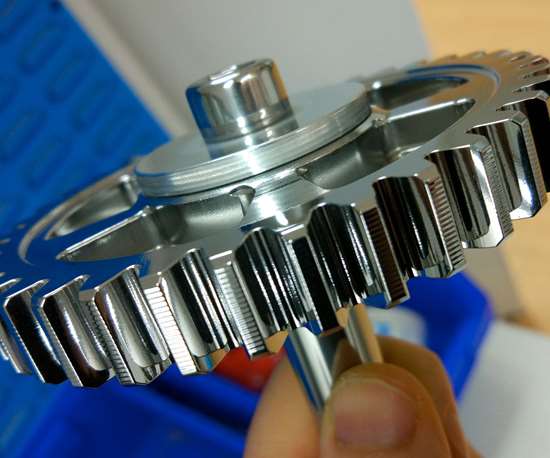 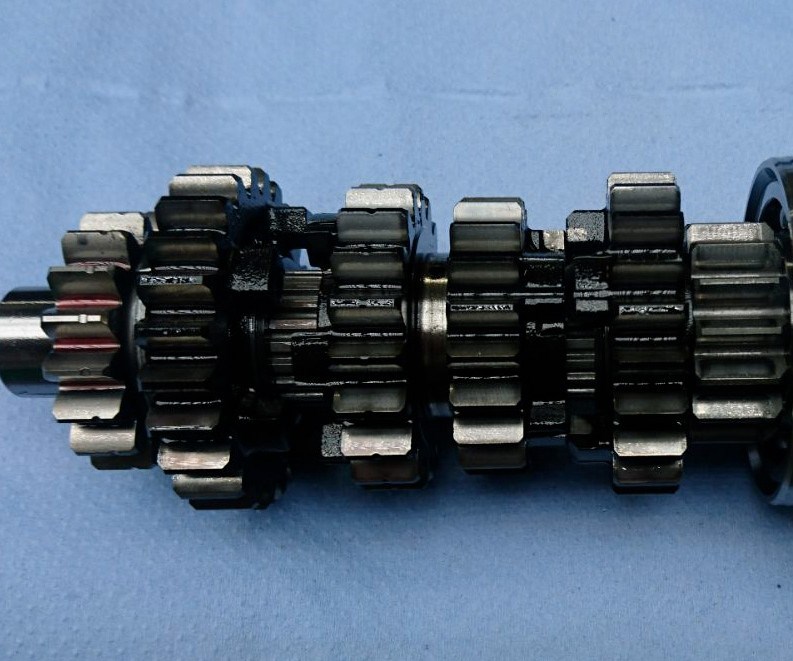 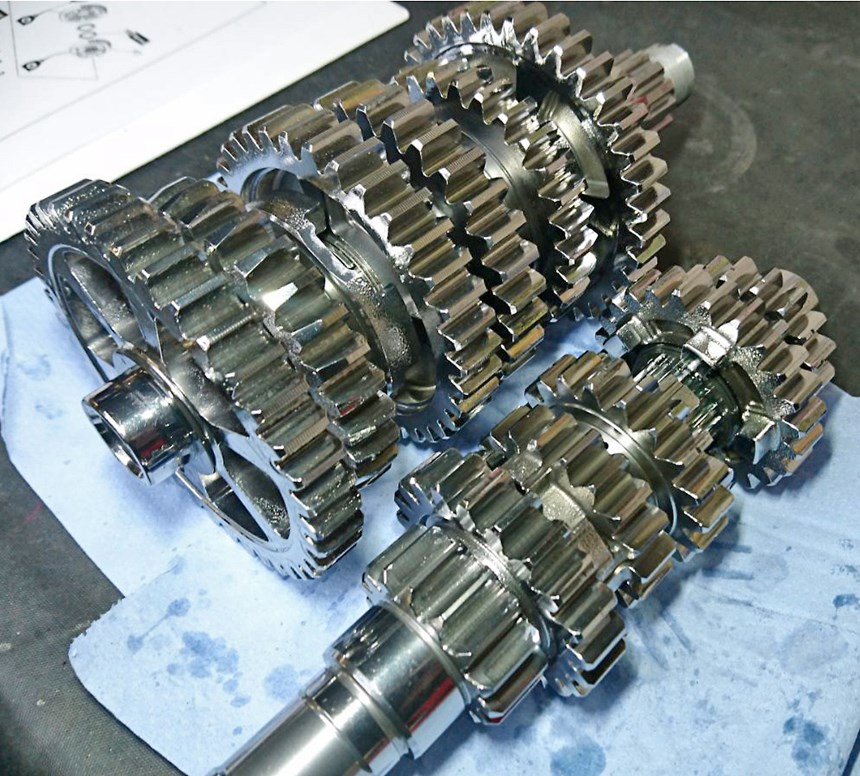 Stream finishing is capable of achieving surface smoothness values of 0.01 micron Ra for parts such as gears. Reduced friction means less heat and up to 50 percent less noise emissions. 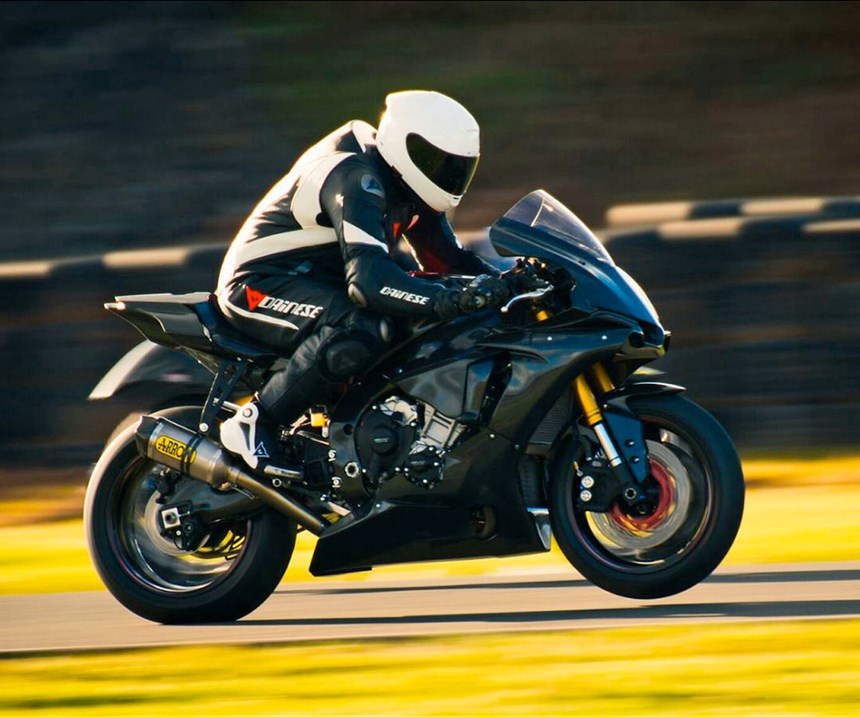 Kieran Sangha, owner of Sangha Race and Restoration in the UK, knows that increasing engine performance is the ultimate goal of every race team and rider. 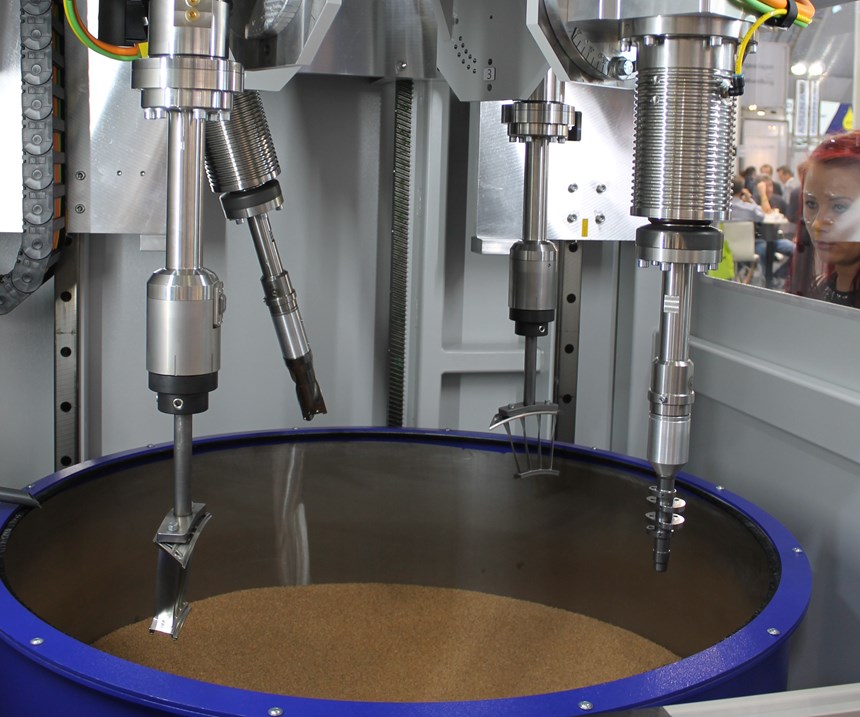 Every motorcycle race team and rider continuously works to improve engine performance. Kieran Sangha, owner of Sangha Race and Restoration in Leicester, UK, builds high-horsepower race-bike engines and knows that simply refurbishing and renewing parts rarely give big performance gains. “Friction between components is an engine and gear killer,” says Mr. Sangha, who, when not transforming motorcycles for racing customers, enjoys the thrill of competition himself. The contact surfaces are under constant stress from powering through the gears while maintaining maximum revs of 18,000 rpm, he says. This causes heat and really dulls performance. It may even lead to component failure and not finishing the rate. Worse yet, a mechanical fault could lead to injury.

Mr. Sangha previously tried to mitigate these problems by vibratory-finishing gears, shafts and engine parts. The process did improve component surface finish to a degree, but they still had a roughness that was noticeably uneven across the surface. Also, chemicals used with the media in the vibratory machines could weaken the metal and hardened surfaces. Disappointingly, component life span and bike performance remained unchanged. 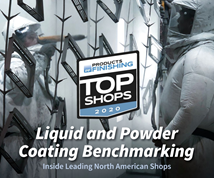 “The molecules of the ceramic medium used in the vibratory-finishing process weren’t penetrating right into the root of the gear where we needed superfinished surfaces,” Mr. Sangha says. “I knew there had to be a better way to finish our gears and other race components.”

Polished Surfaces in No Time

Mr. Sangha found the solution when he turned to finishing specialist Fintek in the UK, a company that has been surface superfinishing parts for jewelry makers, aerospace component manufacturers and top motorsports teams for more than 30 years. Developments in this surface-finishing technology means it is increasingly affordable to smaller teams and race engineers. Fintek’s newest extreme performance finishing technique is called “stream finishing.” The process was developed by German company Otec, and it is capable of achieving surface smoothness values to an average roughness of 0.01 micron Ra, in a fraction of the time as traditional methods such as vibratory finishing or disc finishing could accomplish, with assured repeatable quality. The process also has the added benefit that it can eliminate stress-fracturing risks.

“In contrast to other finishing processes, stream finishing not only polishes the surface, but positively changes the structure of the material edge zone,” explains Otec Managing Director Helmut Gegenheimer. “As a result, we can influence reduced peak height (Rpk) and core roughness (Rk) values and, therefore, a component’s fatigue strength. The Ra value (the arithmetic average height of roughness-component irregularities) mentioned above can also be achieved by hand polishing, that’s nothing special, but the Ra value does not give a true picture of the real surface profile. Identical Ra values can result in very different lubrication performance. An optimum peak structure (low Rpk values) generates the least wear and reduces friction losses.”

Stream finishing uses fine-grain media with a high density and a diameter of 0.2 to 1 mm—much smaller than media used in vibratory-finishing processes. Mixed with tensides and corrosion-protective media, the material looks similar to wet sand and is accelerated in the machine’s chamber. The workpiece or several workpieces are mounted on a workpiece holder and are immersed in the media at a specific angle. According to Mr. Gegenheimer, the speed of rotation of both the workpiece and the abrasive media as well as the angle in which the parts are clamped and dipped into the chamber depend on the application, requiring experienced operators.

“The abrasive media’s rotational speed controls the pressure on the workpiece and the workpiece rotation controls the cutting speed,” Mr. Gegenheimer says. “The generated high mechanical energy changes the crystal structure on the workpiece surface. Since the media is very fine-grained, it reaches areas such as holes and the roots of gears. Stream finishing enables the so-called ‘third body’ to be formed more quickly between two surfaces in friction. This is the boundary layer where the surfaces, which are separated by a thin oil film, transfer their kinetic energy to each other. This flexing action makes the crystalline nanostructure of the layer extremely fine with a pasty viscosity, reducing friction.”

Stream finishing eliminates the need for lengthy running-in of engines and gearboxes, which reduces oil contamination and extends oil-change intervals by as much as 100 percent. An additional benefit is the 10-percent reduction in heat generated and as much as 50-percent reduction in noise emissions compared to conventionally ground parts, Mr. Gegenheimer explains.

Another advantage is the decrease in micropitting with gear wheels where the lubricating film breaks through at localized points causing mixed friction and excess pressure. This wear causes flattening at the contact point. The most important individual parameter related to this is the surface roughness. Values below 0.2 micron Ra, which Otec finishing typically achieves, can significantly reduce micropitting.

The process is designed for high-value parts, not for mass finishing of screws or other parts that are commonly mass finished with disc or vibration-finishing processes, which take a couple of hours. According to Otec, stream finishing only takes a minute or less. The process can be performed in two stages, whereby the first stage is a grinding process followed by polishing. “The polishing process reduces the peaks after the first process step described above even further,” Mr. Gegenhenheimer says. “It rounds down the peaks to reduce friction while maintaining the surface valley for good lubrication.”

An added bonus was the parts emerged with a highly attractive, polished, mirror-like appearance. To the touch, there was an extreme smoothness extending evenly across all surfaces, especially at the root of the gears, an area that other processes often fail to reach.

What did this mean for performance? Mr. Sangha explains, “Motorcycle racing is all about feel. An engine, gearbox and suspension might all work well, but you can instinctively tell there is a difference with extreme-super-finished components. In testing, there was a considerable 5﻿ percent performance increase. However, it is not just horsepower gains. It is also how quickly the engine makes power and how it feels when it is under load revving freely. Notably, it runs cooler too. As a rider, confidence is critical. You can push it that little bit harder knowing the components and engine are reliable, something overlooked by many of my customers.”

The stream-finishing process also helped to increase component life span. Less friction means reduced wear and less expensive maintenance and servicing. “I will definitely be taking more parts to Fintek for this extreme-performance finishing process. Sangha Race and Restoration has many clients racing competitively, and I am sure they will want the same performance improvements,” Mr. Sangha says.

Otec’s stream-finishing process is also suitable for mass finishing of high-value parts, such as camshafts used in performance engines, to improve their frictional characteristics. In the patented Pulsfinish process, the clamped workpiece is immersed in the media flow of the rotating container and is accelerated to over 2,000 rpm in a very short time. Within 0.5 second, the workpiece in the media is increased to maximum tangential acceleration and deceleration back to zero, producing relative speeds of up to 30 m/s and accelerations of up to 40 G.

This not only removes grinding marks and reduces the roughness parameters to values significantly below 0.1 micron, but also creates microcavities. According to Otec, these collect the lubricating oil, which is not displaced on contact as it is with conventional grinding grooves.