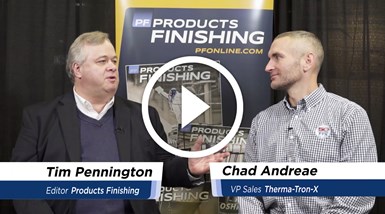 Products Finishing had the chance to sit down with Chad Andreae, vice president of sales at Therma-Tron-X, to discuss some of the latest products and innovations from the company, which designs, fabricates and installs custom paint finishing systems for industrial clients.

One of the innovations that Andreae speaks about is TTX’s Automated Conveyor Carrier (ACC) material handling system that incorporate a wireless network to send instructions to individual carriers throughout a paint line.

How to Maintain Vibratory Finishing Media

How to Minimize Plug Loss and Leakage During Coating

A Conversation With Will Wallace of SAT Plating

“Just over the last year or so, we’ve developed a few neat things, such as the ACC,” Andeae says. “Another one we’ve developed is a VOC destruct system that will reduce odor and energy consumption on natural gas up to 25%. It's really a retrofit that we can put in after the fact on any old system.”

Andreae says carriers are hung on an overhead I-beam rail and propelled using an adjustable friction drive wheel. The systems are equipped with automatic charging stations located along the path and units can be swapped out with spares for easy maintenance.

“For many years, overhead monorail conveyor and the overhead power and free has been the predominant style of conveyance out there, and this ACC looks a lot like an AGV,” he says. “It’s 100% wireless. We can do different things like accelerate or decelerate, change directions, put crosses in systems — just do really neat things and have it be fully flexible for the customer.”

Andreae says the ACC systems are much cleaner and quieter than traditional conveyors, and can be programmed to perform various tasks at various locations.

“Along with flexibility — which is what a lot of customers want in facilities — is the aspect of safety. It’s a really safe device,” he says. “I can put different sensors on because it's completely self-contained where, if there's an individual that gets in the way, we can now stop the conveyor or we can alarm them or we can do different things just like an AGV the floor.”

The ACC allows TTX to do some fascinating things with equipment design, and Andreae says they can change the rules like never before.

“Maybe we can provide a smaller washer that does exactly the same thing that a larger, more capital-intensive system could do,” he says. “It allows me to change the designs on washers, ovens and ecoat immersions.”

Andreae says that, before, they would sell a standalone paint system and there wasn’t a lot of integration into the customer’s facility, but the ACC system has changed that.

“Having the flexibility of this system, I can take things from weld to paint and then to assembly and I can integrate it 100%,” he says.