The Finishing Index closes out the first half of the calendar year with the best performance in its history. 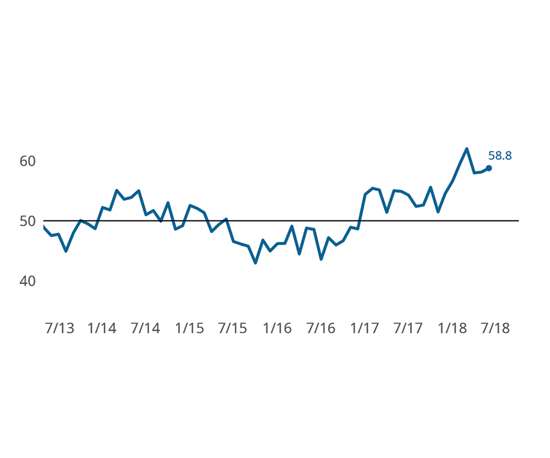 The Finishing Index increased in June, setting a new performance record for the first half of the calendar year. June’s reading was the third-highest since recording began in late 2011.

Data is derived from a monthly survey of finishing shop managers. In June, survey respondents reported expansion in five of the six business components used to compute the index. For a second consecutive month, supplier deliveries led the index higher, followed by production and employment.

Registering 58.8, the Gardner Business Index (GBI): Finishing advanced slightly in June, closing out the first half of the year with its best performance in history. The index averaged a record 58.9 in the first six months of the year, significantly better than the comparable record of 54.4 set last June. It also was up 6.9 percent from the same month one year ago.

Gardner Intelligence’s review of the underlying data for the month reveals that supplier deliveries led the index higher, followed by employment, new orders and production. The index, which is calculated using an average-based formula, was pulled down by backlogs and exports. All components except for exports expanded during the month.

Although June’s backlog reading pulled the index lower, it was still the second-highest reading in recorded history, beaten only by its March reading. For the second month in a row, supplier deliveries were the index’s leading driver, superceding production and new orders, which have been leading the index nearly every month since early 2017. If this change is sustained, it may indicate a maturing of the expansionary phase of the current business cycle.