Industries across the board demonstrate strong growth.
#plating 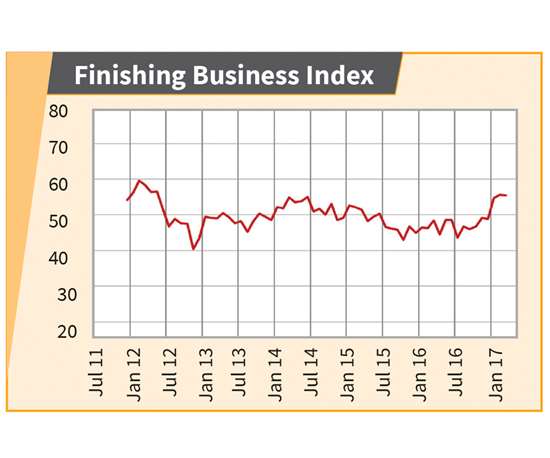 With a reading of 55.5, the Gardner Business Index showed the finishing industry expanded for the third month in a row. The rate of growth dipped slightly from February but has remained constant through the first quarter of 2017,the strongest period of growth for the industry since 2012.

Since 2015, the material prices index has increased significantly. In March, material prices increased at the fastest rate since the survey began in December 2011. Prices received increased for the fourth month in a row and at its fastest rate since February 2012. The rate of increase generally stayed consistent over the last fourth months. Future business expectations remained robust, although the index fell just below 80 for the first time since September 2016.

All industries except for the machinery/equipment index demonstrated growth in March. Automotive grew at a robust rate for the fourth month in a row, with the industry’s fastest rate of growth since the survey began. The forming/fabricating industry has grown for four months with strong growth in the last three months. The medical industry grew significantly for the second month in a row and the aerospace industry has experienced strong growth for five straight months.

Except for the South Central, all regions of the country showed strong growth. The North Central-West was the fastest growing region with an index over 60, the region’s fastest growth since the survey began. The Northeast, Southeast, West and North Central-East all grew significantly.