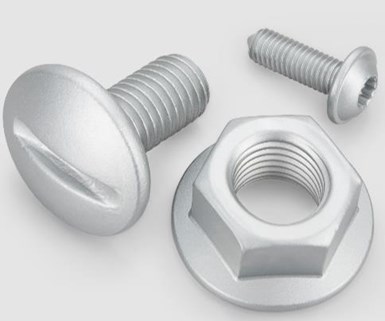 The Zintek 200 SL F two-coat system from Atotech (Berlin, Germany), has been approved to meet French OEM standards for protection of fastener systems.

In addition to its good adhesion properties Atotech’s Zintek 200 SL F is said to show good cathodic corrosion protection. According to the standards for protection of fastener systems, a coating must maintain corrosion resistance in the neutral salt spray test (ISO 9227) without base metal corrosion, for at least 600 hours. According to Atotech, Zintek 200 SL F exceeds this, lasting for more than 1000 hours without corroding.

Unlike conventional anti-corrosion systems, which are based on zinc flake coatings consisting of two base coat layers and one top coat layer, Atotech’s Zintek 200 SL F system saves one layer by incorporating just two self-lubricated corrosion protection layers that provide a controlled coefficient of friction (CoF). Compared to a three-coat-system, the silver base coat two-layer system with integrated lubricant enables a lower deviation of coefficients of friction, giving a centered COF in the range of 0.12 to 0.18.

Zintek 200 SL F fulfills friction requirements defined by both OEMs on diverse materials, such as aluminum, galvanized steel and e-coated steel. Even with two lubricated layers the Zintek 200 SL F solution does not exhibit a “stick-slip” effect. Thus, the system is recommended for the coating of safety labeled fasteners and parts.