The company was founded in 1975 when two chemists, William Rosenberg Sr. and Herb Geduld, rented space in a former textile mill. 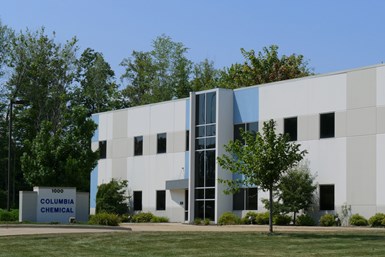 Columbia Chemical was founded in 1975 when two chemists, William Rosenberg Sr. and Herb Geduld, rented space in a former textile mill in Cleveland. Focusing on R&D and production, the partners developed the strategy of specializing in manufacturing the zinc brighteners, initially relying on outside companies to market and distribute their products. Within five years, the business was thriving and expanded beyond private labeling to develop the Columbia Chemical brand. As the surface finishing industry moved toward alkaline cyanide-free zinc plating, Columbia Chemical developed its Colzinc ACF-II process.

A new headquarters was built in 2008, consolidating R&D, manufacturing, technical support and customer service under one roof. The company became 100% employee-owned in 2011 and expanded into the decorative plating market in 2015 with a full line of nickel plating and trivalent chromium plating processes. Ongoing development has resulted in products to meet the growing demand for zinc nickel in the automotive market and deliver additional high-performing trivalent passivates.