Reshoring of Medical Equipment With an Eye on Electropolishing

Hubbard-Hall prepares to help surface finishers seeking to implement electropolishing processes in order to take advantage of reshoring efforts to bring production work back to the U.S.
#medical #covid-19 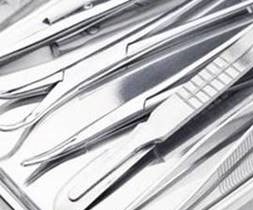 The recent pandemic crisis has brought a renewed call for more medical equipment to be produced in the United States, which could result in an enormous amount of industrial manufacturing opportunities, including for those surface finishers who specialize in electropolishing.

Steven Byers, PhD, a senior economist for the Coalition for a Prosperous America who worked as an engineer in the aerospace industry for many years, says in a new report that reshoring health care production programs to the U.S. could create over 1.1 million jobs while boosting GDP by $254 billion. While a majority of that would come from reshoring the manufacturing of personal protective equipment (PPE), there is also a call for having medical equipment and surgical supplies manufactured in the U.S.

“It is becoming widely apparent that outsourcing the production of huge parts of our medical equipment and supplies to foreign countries was a disastrous mistake,” says Dr. Byers. “In the aftermath there will be growing resolve to bring back large volumes of production to the U.S.”

In the report written by Dr. Byers and Jeff Ferry from CPA titled “We Need More Equipment and We Need It Now,” the authors report that in the last 20 years, large healthcare multinationals outsourced production primarily to Asia. According to the U.S. Census Bureau, the U.S. imported $27.6 billion in medical, surgical, dental or veterinarian instruments and parts in 2019, which represented a 406% increase from 2000.

Many of those medical instruments and parts require precise manufacturing tolerances, says Jeff Davis, senior vice president business development and distribution at Hubbard-Hall (Waterbury, Conn.), which is often why electropolishing is needed for a precision finish.

“Electropolishing replaces traditional mechanical treatments such as milling, blasting, grinding, and polishing,” Davis says. “It is an excellent procedure to streamline and smoothen microscopic surfaces, and it reduces labor-intensive operations. The reshoring efforts could be a real boost to finishing shops who don’t have the process in their line-up and want to start offering it to grab new business.”

Mike Valenti, Hubbard-Hall’s product manager for cleaners and non-ferrous surface preparation, says electropolishing is an anodic treatment of parts that are fully immersed in a special acidic electrolyte. He says ancillary equipment — such as bussing, heaters, anode and cathode bars, DC rectifiers and agitation — are all similar to those used in traditional electroplating.

“It is essentially a controlled, accelerated corrosion of the part,” Valenti says. “But it can be tricky for some finishers who may not have experience in the electropolishing process. Optimum results can be achieved with the traditional operating parameters of current, time and temperature, but operators need to pay close attention to bath chemistry, racking, positioning, and part-to-cathode distance.”

Polishing and Deburring in Single Step

As current is passed through the part during electropolishing, metal is dissolved from the surface at a rate dependent on the current density applied, as well the temperature of the electrolyte. Valenti says metal is removed more rapidly from the high points of the metal surface, which produces the effect of smoothening and brightening the metal surface. This preferential metal removal rate also permits the electropolishing process to be effectively utilized for the deburring of metals by removing surface inclusions, surface skin and through the formation of anodic oxide film, which increases the corrosion resistance and passivity of the metal, as well as serving to reduce surface stresses and strains.

Ryan Catania, a Hubbard-Hall technical service engineer, who specializes in electropolishing and works with many of the top finishing operations in North America, says the process is especially effective on medical instruments and parts because polishing and deburring are accomplished in a single step, and allows for greater bulk processing of parts.

“What you get is a clean, even surface finish that is very passive,” Catania says. “It is one of the best surface polishing methods, and sterilization is enhanced for medical and pharmaceutical applications.”

A typical electropolishing line cycle is similar to other plating operations, and includes:

The Hubbard-Hall team says it is preparing to help those surface finishers who want to take advantage of the possible high level of reshoring that could occur if manufacturers bring the production work back to the U.S.

The company offers numerous chemistries for electropolishing, but more importantly also offers the technical expertise to help shops get an electropolishing line up and fully functional in an efficient manner.

“Unfortunately, if applicators do not know what they are doing, things can go bad very quickly with their line,” Valenti says. “Yes, we sell the chemistries to perform electropolishing, but we also provide the expertise to get a line ready and to get it running at the highest level.”