ACP Systems has equipped its new JetStation-HP with its CO2-snow quattroClean process to facilitate maximum cleanliness of parts. 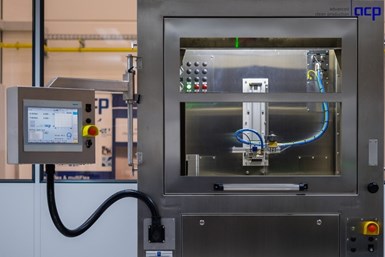 ACP Systems (Ditzingen, Germany) has developed two new JetStation-HP CO2 snow-jet booths for cleanroom use. The company says these booths clean in manual or semi-automated processes with quattroClean technology that provides high-purity workpieces for use in medical engineering, the semiconductor industry, and laboratory and development environments.

The JetStation-HP booths are closed, sound-proofed stand-alone units made entirely of stainless steel. ACP says it only equipped the booths with components and materials used in cleanroom applications, and its design focuses on quickly removing detached contaminants and carbon dioxide. The system also tries to prevent the formation of dirt pockets, preventing cleaned parts from being recontaminated.

For both the manual and automated booth models, a system for monitoring the CO2 concentration in the working area comes standard. If the set limit value is exceeded, the carbon dioxide supply is automatically switched off and the control displays an error message.

The technology for the snow-jet process and media preparation is integrated in the system housing, speeding up setup time by only requiring connection for the carbon dioxide and compressed air supply.

ACP Systems’ quattroClean process uses liquid carbon dioxide as the cleaning medium, which, as a by-product of industrial processes, the company says is climate-neutral. The carbon dioxide expands in the air to form CO2 snow, and is bundled with compressed air that the machine accelerates to supersonic speed. When the jet of snow and compressed air impacts the part surface, a combination of thermal, mechanical, sublimation and solvent effects remove particulate and filmic contamination. The crystaline carbon dioxide transforms from a solid to a gas, instantly drying the parts. The company says this process is gentle on materials, and thus suitable for parts made from almost any technical material.