A second electrocoating line doubled the capacity for coating clutches... 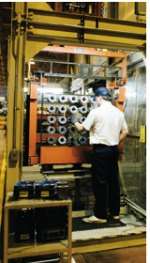 PARTS are manually loaded and unloaded from the rack assemblies.

PARTS are manually loaded and unloaded from the rack assemblies.

PLC Control allows the operator to monitor a variety of both parameters.

PLC Control allows the operator to monitor a variety of both parameters.

COMPRESSOR/CLUTCH assemblies are dipped into the electrocoating tank.

COMPRESSOR/CLUTCH assemblies are dipped into the electrocoating tank.

Michigan Automotive Compressor, Inc.( MACI) manufactures 2.8 million compressor/clutch assemblies per year for Chrysler, Toyota, Honda of America, NUMMI (a GM-Toyota joint venture), BMW and Mitsubishi. Owned by the Denso Corp. and Toyoda Automatic Loomworks Ltd., the company has sustained significant growth every year since it was founded in 1989.

Gary Dods, assistant manager, Clutch Production Engineering, joined MACI in September 1990. Just prior to his hiring, MACI had commissioned its first electrocoating line, a system that coupled MACI's loading devices and fixturing with a tank line section and convection cure oven engineered and manufactured by another company. The line currently paints 25 rotors and 12,000 total parts each day. If needed, this 17-stage system adapts to painting other components.

In 1995, heightened demand for U.S.-made compressors created the need to double MACI's clutch capacity from 1.4 to 2.8 million units annually. The project had a $60 million budget and was scheduled to be completed in 20 months.

One of the most critical equipment decisions was a second electrocoating line. MACI was determined to select a supplier who could design and manufacture an electrocoating system that would fit within a limited space, yield consistent results, have low-maintenance requirements and could later accommodate additional throughput and a greater number of different parts.

Numerous system builders were considered. Based on its experience during a previous project with George Koch Sons, Evansville, Indiana, as well as the references and maintenance records it examined, MACI once again selected Koch as its system designer.

The system manufacturer was responsible for a turnkey system with 14 chemical stages and 17 stages in all. Its responsibilities also included a tank line, oven, load/unload stations, material handling and supervision of all facets of installation.

The cycle time for the system was set at a relatively aggressive 24 racks per hour. Loading is manual, although the conveyors and load/unload systems, programmed lift and carry transfers, transfer carts and load/unload rotating tables have been engineered with clearances and other accommodations for six-axis robotic loading.

From the load stations, parts enter a series of chemical stages, each 130 seconds long. Each transfer between stages takes 20 seconds. Two alkaline degreasing/cleaning stages begin the process. These are followed by two soft-water rinses. Next is a conditioner stage that uses Henkel Surface Technologies', Madison Heights, Michigan, FixidineZ in DI water. The conditioner, a titanium-based product that operates at ambient temperature, improves the bond between the parts and the subsequent phosphate coating. It is an immersion process for more consistent results and easier control.

MACI's ambient-temperature zinc-phosphate solution was developed and patented by Denso Corp. (then Nippon Denso Ltd.) in the 1980's. This step provides excellent consistency of coverage, with significant utility savings.

Phosphated parts next move through two soft-water rinses and a DI water rinse in the ninth stage. The electrocoating stage applies PPG's, Pittsburgh, Pennsylvania, Powercron 604/640 to 0.9 to one mil thick. MACI is now working to replace the 604 with PPG's new 590, a HAPs-free, leadfree system that is compatible with MACI's commitment to minimize both air emissions and chemical wastes.

Parts are conveyed through the chemical and electrocoat stages by a walking beam system provided by the system's manufacturer. This design feature prevents the problems associated with hydraulic systems. These problems include contamination of washer stages by hydraulic cylinders mounted above the tanks.

The design uses a common chain to drive the beam horizontally and vertically, picking and placing each rack without any sliding friction. Based on a highly successful design, the special walking beam has a track record of high-up-time performance. It requires little maintenance and lowers chemical consumption by reducing evaporation. It is also well suited to environments with limited space. The MACI system, for example, has a footprint of just 2,400 sq ft, including the transfer carts, lift and carry transfers and load/unload tables.

At MACI, the line is not shut down until all parts have exited the curing oven. Once the system is shut down, there are 67 minutes of empty hangers to run in order to process parts through cure. A parts' sensing system prevents hangers from being charged and paint from being wasted as the cycle is completed.

Immersion permeate rinses follow the electrocoating stages. All three rinses counterflow to the electrocoat tank, creating a closed-loop system. This technique recovers the vast majority of solids and minimizes waste.

Stage 14 is a DI water immersion. An air knife removes excess water before the parts enter a gasfired convection oven for a minimum 30-minute cure above 400F. Parts cool during a 20-minute cycle in a forced-air cooling tunnel. The operator can change the centers (and therefore the dwell times) of parts through the oven and cooling tunnel by varying the speed of the oven's overhead conveyor, a major advantage in terms of overall system flexibility. Parts are automatically shuttled to a manual unload station.

The electrocoat system is PLC-controlled with an Allen Bradley, Mayfield Heights, Ohio, Panel View, specified by MACI. The panel provides screen control for tank temperature and other parameters and offers prompts for preventive maintenance based on machine run time.

Among the techniques MACI uses to keep quality high are quality circles, work teams of five to 20 workers representing diverse disciplines and experience. Each year, as part of a process of Kaizen or continuous improvement, the groups select a production, safety, ergonomic, environmental or other process they believe could be improved. A detailed analysis is performed, and the group then recommends countermeasures, implements corrective action, and monitors the progress of improvements. The electrocoating system has operated at approximately 95 pct up-time since full production was started and has not been selected for review.

Another MACI idea that helps optimize equipment efficiencies is the New Equipment Management Program. Each time the company moves to increase capacity by adding equipment similar to systems that are already inplace, extensive maintenance prevention data is gathered from production, engineering and maintenance sources, along with concrete design recommendations for ways that new equipment could be improved. The list frequently includes 100 or more separate items.

"Often," according to Mr. Dods, "the process ends up confirming what we have believed, that what we bought the first time around truly was the best available technology at the time. And, just as often, it still may be. Our maintenance prevention items often reflect features or methods that are not `available' until they are engineered into our equipment. In other instances, we realize that a problem is clearly the result of specifications we wrote."

Mr. Dods sites as an example the first two degreasing tanks on the original line, which were heated by external heat exchangers. "This is fine for paint, which is not corrosive, but proved to be not as great for chemicals. When cleaning chemicals move outside the tank for heating, a housekeeping problem results. Intank steam coils corrected the situation on the second system.

"In another example, we had chronic failures with the stamped stainless-steel pump in the electrocoat tank. We are not sure exactly why, but it appeared that the stamped construction and impeller support the pump maker recommended were just not suited to 24-hour a day immersion in an electrocoat tank. The more heavily constructed pullout pump recommended by the engineers has given us far longer service life. It is also more maintenance friendly, because rotating elements of the pump can be changed without pulling the impeller housing. The cost of the pull-out pump was three times that of the original pump, but the downtime of our system runs to thousands of dollars per hour. And when the pump stops, that is an easy two hours. Thus, the higher initial cost of the pump is soon recovered by the lower downtime."

The new electrocoating line, including its complex material handling system, has given MACI what it required: a doubling of production capacity, substantive updates in technology and completion within the eight months targeted for the design/build and installation of this system.

After the successful completion of this line, the system manufacturer was recently called upon to perform a major upgrade to the vertical chain transfer section of the original line. The transfer as originally designed had self-lubricating, low-friction copper/graphite bearings mounted inside the oven. Bearing life and bearing maintenance had been problematic due to the 400F environment. To solve the problem, bearings were relocated outside the oven. This simplified visual process control and lubrication and allowed the use of standard bearings.