Changing the way you do things can be difficult. But, Grote Industries embraces change by encouraging its employees to continually generate ideas to improve its manufacturing process. This philosophy made the switch to new electrostatic bells on the painting line a rather easy one... 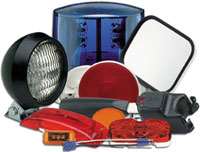 Change is an inevitable part of doing business. Without positive change, a company will become stagnant, losing ground to its competition. And despite its benefits, such as increased efficiency and higher profits, some companies avoid change as much as possible. To people at these companies, change can mean being taken out of their comfort zone or the loss of a job.

So, how do you go about implementing positive changes to your company, whether they involve an alteration of corporate structure or the implementation of new electrostatic bells on the paint line?

The True Cost of SCR Versus Switch-Mode Rectifiers

Grote Industries, Madison, IN, is a manufacturer of light housing and mirrors for the transportation industry. The company uses a variety of finishes, including enamels, lacquers, vacuum metallizing and plating, to coat these parts.

Being forced to make the change put Grote in a difficult position. That's because when people are forced to change the results are usually anything but a smooth transition. According to one individual, "If employees don't like it, they're not going to make it work. They'll make sure it doesn't work."

But, fortunately for Grote, it has established a philosophy that embraces and fosters change. That philosophy is best exemplified by its requirement for buy-in from employees before making a change and its IDEAS program (see below)

Ask anyone at Grote and they will tell you the key to making a smooth transition and creating positive change is getting buy-in from those that will be affected most by the change. "On anything that we do, I don't make a decision even though it may be my responsibility," explained Ms. Gibson. "We have a committee, and the majority rules on whatever we do. If you don't have buy-in from everybody on the floor that's going to be using it, it's not going to work. I can guarantee it before we put it in."

For Ms. Gibson, eliminating employees concerns and fears is crucial to creating positive change. "One gentleman's been in our paint room for almost 40 years. He always touched up parts. He doesn't feel like the parts are painted if he doesn't have a gun," stated Ms. Gibson. But, by including the painter on the committee, he could be confident that the new equipment would meet his quality standard.

After examining equipment from a number of suppliers, the committee decided on PPH 307 electrostatic high-speed rotary atomizers from Sames Corp. These guns have provided Grote with several advantages and benefits.

While Grote's previous guns were also electrostatic, the technology has changed in the last 20-25 years. The improved electrostatic charging of the new guns means fewer paint particles end up as waste or overspray and more are attracted to the part's surface. The improved electrostatics of the new guns have increased Grote's transfer efficiency to 65%, which is significantly higher than the 20% it was achieving previously. With the improved transfer efficiency has come reduced paint use and reduced VOC emissions. In about 9 months, Grote has saved $10,000 in paint costs, which does not include additional chemical savings for Grote because it reduces its own paint.

Another advantage of the new electrostatic spray guns is the wide range of shaping air. The shaping air can create a narrow, penetrating spray pattern for intricate parts or parts with cavities, and it can produce wide spray patterns for predominantly flat parts. The shaping air, combined with the improved electrostatics, is important for Grote because its parts have a variety of geometries. "We do anywhere between 200 and 250 different part numbers on this line. We do quite a variation on the line and to find one piece of equipment that would encompass all of that was difficult," stated Ms. Gibson.

But, the most important benefit of all has been the reduction of touch-up required on each part. With the addition of these guns, Grote has eliminated touch-up on 60% of the parts it manufactures. The company feels it could eliminate 90% of the touch-up work it used to do, but there has been a substantial learning curve because of the company's large number of parts. The reduction of touch-up has also meant a more uniform finish from part to part, which is important for Grote since it serves the automotive industry.

While there is still room for more improvement, Grote has certainly achieved a positive change with the addition of the new electrostatic rotary atomizers. And it wouldn't have been possible without the input of all the company's employees.

IDEAS is an acronym for Involvement, Development, Evolution, Achievement and Success. The program was created by Grote to afford its employees the opportunity to earn recognition, prizes and financial rewards while assisting the company in reducing operation and production costs.

Each division at Grote has an IDEAS team with a representative from each shift. The teams are headed by supervisors and review all ideas that are submitted. All approved ideas receive a 10% reward of the first year's savings. Half of the reward goes to the employee(s) that came up with the idea. The other half is put into a pool that is distributed quarterly to everyone who has had an idea approved and those individuals that have worked on ideas.

The result is more than $1 million in savings every year for the company.