Hard Chrome Plating on Plastics Tooling: Now More Than Ever

For years it was only used to salvage tools, now it can be used for more…
#plating 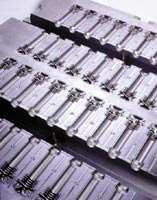 For many years, hard chrome plating on plastics tooling was only a means for salvaging mold components of intricate shape and usually used for increasing shut-off dimension (more or less a shimming approach by the mold maker).

Then, as the onslaught of high-performance tooling demanded tighter and tighter tolerances, such words as scoring and galling became more reason to take advantage of hard chrome's intrinsic properties: anti-galling and lowest coefficient of friction of all other engineering metals. Finally, with the advent of highly corrosive and highly erosive materials coupled with both optical and aesthetic quality requirements, the need for properties that only chrome could offer has made it the talk of not only the mold maker but the mold designer as well.

The success of hard chrome in plastics tooling and industrial applications can probably be attributed to its unique combination of properties, which are not possessed by any other commercially available material. The most important of these being hardness.

The hardness alone would not be sufficient to secure widespread use in plastics tooling applications, because a number of other hard materials and other hardening processes are available. It is the combination of great hardness with extremely good corrosion resistance (equal or superior under most conditions to that of such noble metals as gold or platinum) and very low coefficient of friction that give such remarkable results in plastics tooling applications. To this should be added the ease of stripping and replating for repeated salvage when the plate wears beyond permissible limits.

The benefits of hard chrome deposits are not obtained unless the coating is deposited on a sufficiently hard basis metal and to a sufficient thickness. Even a relatively heavy deposit of hard chrome may be crushed or indented on a soft metal such as copper. The best possible adhesion is also important, particularly where the surface may be subjected to severe stress and shock. Both conditions being prevalent in the molding cycle.

The low coefficient of friction and desirable surface properties of chromium are realized for the most part only on relatively smooth surfaces. The deposits can be ground and lapped to size. The deposits are easily ground but are sensitive to heat and should be ground with very light cuts, soft wheels and plenty of coolant.

In most cases, bright deposits are obtained on highly polished molding surfaces with no further mechanical treatment required. By carefully controlling the plating operation, it is possible to plate to size within very close limits.

Overall, the mold designer, mold maker and molder have at their disposal a unique combination of physical properties, which for the most part offer some level solution for the most common of plastics tooling problems. How does one, then, determine when, where and how much?

Application Before the Problems

The mold designer is the one individual who must initially realize his creation. Although the most common concerns have a variety of “rule-of-thumb” solutions that are justified, the word “plating” seems to be somewhat blackballed in the plastics tooling vocabulary.

However, 0.0002 inch of hard chrome on a mirror-finished core (especially a large core) can save hundreds, if not thousands, of dollars in production just by preventing oxidation from forming on a sweating mold. It won’t appreciably affect any dimensions. If maintenance forgets to oil it down before storage, it won’t rust. With today’s plating methods, adhesion quality (from qualified sources) is approaching perfection. Now why doesn’t the mold designer know this? Because, to the average mold designer hard chrome means someone made a mistake (salvage).

Again, 0.0002 inch of dense hard chrome on a large L/D ratio core with minimum draft can make enough difference in friction reduction that the core without chrome may never eject acceptability.

A great many of the plastics tooling applications for hard chrome derive from the fact that the deposit has a very low surface energy. Because of this low coefficient of friction, it is ideally suited for many engineering applications.

These are just two cases in which a thin deposit could make a world of difference. The total list can be endless. The applications mostly fall in the same general categories, specifically abrasion resistance, corrosion resistance and friction reduction.

In order for the mold designer or mold maker to effectively specify and successfully benefit from the various properties of chrome, he must first accept it. In order for this to be a success, somewhat of a crash course is in order!

Chromium is a grayish white metal, hard, brittle and capable of being polished to a mirror finish, in which condition it seems to assume a bluish tinge. Some of the characteristics of chrome in the metallic state are as follows:

Hard chrome deposits have a lustrous appearance. The deposit is not largely affected by temperatures to 800F, and it resists corrosion extremely well. Also, it is attacked by few chemicals or substances. The main properties for which it is applied are:

Hard chrome plating is an electrochemical process by which the chromium is deposited onto a conductive substrate by virtue of electrolysis at controlled (low) temperatures and current levels.

Hardness and Resistance to Wear

The extreme hardness of the electrodeposit has led to the adoption of the term “hard chrome” in industry. Average figures obtainable give these hardness values:

The wear resistance of hard chrome is based essentially on this hardness and on the deposited metal’s low surface energy. Unfortunately it is very difficult to lay down specific means of testing and measuring wear, although it is a definite fact the hard chrome performs in a superior manner under most conditions.

In plastic tooling applications the main sources of wear include the following:

Resistance to Corrosion and Heat

Hard chrome deposits are used extensively in a vast number of applications to resist corrosion of the basis metal by extremely superheated gases generated during the molding process.

The protective qualities of the deposit depend on a number of factors, the most important of which are the fine grain structure of the deposited metal, its resistance to oxidizing and reducing agents and high temperatures that are necessary to oxidize the metal.

Unfortunately, one inorganic acid gas, which results commonly from the degradation of PVC, is beyond the resistance of the plate. Use in such an application should be limited with at least 0.003-inch deposit.

In plastics tooling applications, heat is hardly a factor to consider as possibly affecting the chrome properties. Hard chrome resists the effects of heat well up to 800F and then changes only slightly up to 1,000F.

It has been found that hard chrome is first attacked in the cracks forming the network. With standard plating solutions and proprietary solutions, these cracks are again related to temperature control. In order to satisfy the requirements of a thin dense deposit, the solution temperature tolerance is in the order of ±5F. This performance can be used in two ways: 1) A fixed thickness is deposited for improved resistance; or 2) The deposit is greatly reduced to give the same performance. A large number of experiments have been carried out to determine the optimum deposit thickness for various applications. From these, it has been found that 0.00005-0.0002 inch chrome can give good protection to parts subjected to light corrosive conditions. Chrome of 0.0002 to 0.0004 inch can withstand wear and atmospheric corrosion and 0.0005 to 0.002 inch provides superior protection against chemical attack.

One of chrome’s main attributes is its low coefficient of friction. Being the lowest over all other metals, it has found its place not only in the tool room of plastics manufacturers, but in the compounding and mixing departments. Deposits in the order of 0.00005 inch are being applied on taps and reamers used in second operations of molding to increase wear life by virtue of its frictionless properties. This is illustrated below.

Chrome can be ground or polished to a high finish. This is a great advantage in applications where the minimum of draft is mandatory. Hard chrome prevents sticking, thereby reducing the amount of deformation upon ejection of the molded part.

The approach in the aforementioned uses should be such that final mirror finish polishing is accomplished on the plated surface to avoid repetition of labor.

Applications of Hard Chrome The applications of hard chrome in the plastics tooling industry grow daily as new ideas occur for the use of the deposit.

The following list is given as a guide for the successful use of the deposit in the more established applications.

The revolution that is taking place with the applications of hard chrome offers a variety of opportunities to the plastics tooling industry. Yet, like any revolution, it is subject to mistakes by those who are overcome by the thrill of new horizons but are blind or careless to its pursuit. No longer should hard chrome be an ugly word to the mold designer, mold maker or molder.

Faced with the ever rising cost of labor plus a need for increased profits, the applications of hard chrome for both salvage and performance requirements must be developed along with with design and engineering.

The designer of tomorrow’s molds must realize that the benefits of hard chrome must not be overlooked. They must be incorporated in the initial plans where problems in processing are anticipated. However, the designer must be aware of specification, as well. Just to say “flash chrome” will no longer suffice, or it will continue to bring about the same results.

Hard chrome applications in the engineering discipline are by far no new toy. It is almost now 60 years since deposition was offered to the engineering industry, and during this time the importance of the process has steadily increased.

The application of hard chrome is now a recognized means of prolonging the life of all types of metal parts subject to corrosion, friction and abrasion. And it should be well borne by the mold designer, mold maker and molder that they will benefit by learning a little more about the practical side of the job. There is no doubt that very many applications have reached a point where hard chrome has become an indispensable tool.

In its more than 75 years of steady growth, hard chomium plating is not without limitations. Both the customer and the plating service must be acutely aware of the shortcomings of such a versatile process. Mainly, its inability to uniformly cover recessed and intricate surfaces. With the help of specialized soft tools such as conforming anodes, some of the limitations can and are routinely overcome. This is where the knowledge and ability of the plater can make the difference between success and failure. Many a case exists where the impossible to one plater is the everyday to another.